Three reasons to be optimistic about the Rangers chances 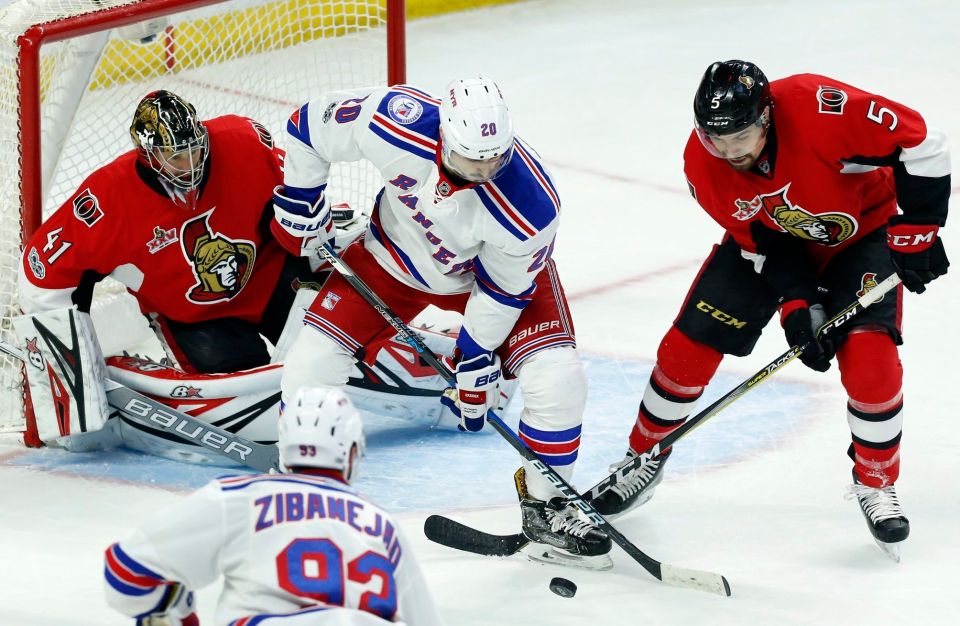 We’ve all had a few days to let the dust from Game 2 settle. I’m sure a lot are still steaming over the in-game deployment choices by Alain Vigneault. I’m also sure there’s a good number of people who want the Rangers to come out firing on all cylinders tonight. I’m sure there are members of both factions too.

But despite the 0-2 series deficit, this is a pretty tight series. Game 2 went to double overtime with both teams playing fairly sloppy hockey. Game 1 was decided on a lucky bounce in the final ten minutes. So there are plenty of reasons to be positive heading into Game 3.

Yes, Hank had a bad game over the weekend. However despite that game, he’s been looking like vintage Henrik Lundqvist all playoffs. He was the only consistent player against Montreal (that’s not to say he was the only good player, just the only one who was consistently noticeable). He had a very strong Game 1, standing on his head through most of the game before some bad luck off Derek Stepan cost the Rangers the game. Hank is dialed in. They certainly need him to be.

That said, if Hank isn’t a .940 SV% goaltender, the Rangers are going to need to score at least three per game. Hank was a little above that before Saturday’s game, but now is obviously below that mark. It is painfully obvious that AV is going to lean on McDonagh, Staal, Girardi, and Holden to protect leads. Hank needs to be better than all four of them.

Even with all the pressure, playoff Hank is the guy you want in net.

This is where your eyes can deceive you, so hear me out. We all focus on the opening period of Game 1, where the Rangers were terrible and allowed 21 shots on goal. But after that, the Rangers really shut it down. For the first two games, the Senators have just 4 more even strength shot attempts (Corsi’s) than the Rangers. Four. That’s it. And they were all in Game 1. Game 2 was even 65 a piece at even strength. So it’s 118-114 for the Senators.

In terms of quality chances through two games, it’s 53-52 in favor of the Senators. So again, nothing crazy. High danger scoring chances are tied at 21 a piece. So basically these teams have been even at 5v5. The Rangers have also had the xG (expected goals) edge in both games. The major difference is that the Rangers are taking way too many penalties. Sure, they scored shorthanded twice, but that is not a recipe for success. Plus, the more time you give Erik Karlsson with the man advantage, the more likely he is to burn you.

The problem isn’t so much the number of penalties, it’s the number combined with the type of penalties. There are way too many lazy stick penalties. It’s a sign of players up and down the lineup being caught flat footed and being lazy. Perhaps they underestimated their opponent, something 99% of us did as well. But both games were winnable.

This is a tad cliche, but I’m sticking to it. First things first, the Rangers can win any game that Lundqvist starts. Which is all of them. So there’s that.

But most importantly, the Rangers have been fairly unlucky this series. Bounces haven’t gone their way. They’ve gone against them in other instances as well. Hockey is a game of puck bounces, and the Rangers haven’t been getting them in the past two games. That’s not to say that the Senators won by accident, it’s to say that both games could have gone either way, and the Senators got the bounces.

I’m a firm believer that the Rangers are the better team, even with that blue line and the recent deployment questions. It’s just weird the way hockey works sometimes. If the Rangers play the same even strength game and manage to stay out of the damn box, then they have the ability and a legitimate chance to take four of the next six games.