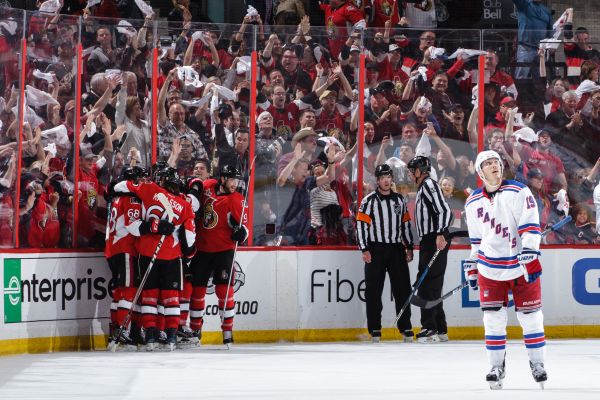 I initially wasn’t going to be covering this recap, but after watching the game, and watching Alain Vigneault blow this game with is lunacy, I insisted I cover it. The Rangers blew three separate two goal leads with idiotic deployment choices, and it burned them in the end. Yes, part of this game is on Henrik Lundqvist, who allowed six goals, four to JG Pageau, a nobody. But for the most part, I’m putting this on AV. Here are my reasons.

1. There is absolutely no excuse to sit Brady Skjei and Brendan Smith for the final five minutes of the game. This comes after the Marc Staal/Nick Holden duo cost the Rangers Game 2 in Montreal. AV simply does not learn from his mistakes. And this one cost them. Listen, I can understand wanting to rely on your vets, but when Skjei and Smith are having the best game of your defensive sextet, and you sit them, you deserve to be blasted. The Rangers got that far despite AV.

2. Getting to the goal by Pageau, of course with Holden on the ice, who pinched and caused a 2 on 1 break the other way. This is why you can’t have Holden out there in pressure situations anymore. This is now twice he’s cost the Rangers, once in each series. At least when he cost them against Montreal, it was to tie the series. Now the Rangers are in an 0-2 hole against a team with a hot goaltender who has made some magnificent saves in two games.

3. Henrik Lundqvist was not good this game. He has been the only reason why the Rangers have been close, but this was not a good game. The first goal to Pageau was really weak, but came after Dan Girardi finished another classic #DammitDan moment, passing the puck directly to him. While that goal was weak, the others were mostly off deflections and bad defense. Regardless, Hank wasn’t Hank. As much as he deserves better, he could have played better.

4. When overtime had started, Skjei/Holden had just 13 minutes of ice time for the game. Ryan McDonagh had 25 minutes. Holden, Staal, and Dan Girardi had 21 minutes a piece. That’s inexcusable deployment, given Skjei had a pair of goals and Holden/Staal have been a tire fire all playoffs. That is on Alain Vigneault, and no one else. That is a major screw up on the coach’s part. And that’s not even the worst of it.

5. Oscar Lindberg and Pavel Buchnevich played less than six minutes each. For the entire game. That’s Stu Bickel territory, and neither are nearly on that level. In fact, you can argue that Lindberg has been one of the best forwards for the Rangers all playoffs. Yet there he was on the bench. That is also inexcusable from a coach that should know better. I say he should know better, but he never learns. He leans on the “trusted veterans” even though the kids are better.

6. Kevin Hayes and JT Miller are having horrible playoffs. If and when Glasss returns to the lineup –more on that below– you know that Miller and Hayes will still be playing. Despite their awful play, they still weren’t even benched. If you were to pick two players who deserved to sit in the double OT game, then I would have picked them. Certainly not Lindberg. But here we are, questioning the coach because he doesn’t answer questions.

7. From this loss, we know there will be changes in the lineup. We all know Tanner Glass is coming in for Pavel Buchnevich, whether you like it or not. That change won’t move the needle at all, and in fact may move it backwards. That’s not to say Buchnevich has been playing well. He didn’t necessarily have a strong game yesterday. That said, he’s still better than Glass, and this is a series of skill and speed, not hitting.

8. Yet despite the change we know is coming, there will be no changes on defense. Nick Holden will still be in the lineup. Adam Clendening, who at the very least is better than Holden, will still be in the press box. I find that to be mind boggling. The only two players who should be untouchable in terms of being scratched should be McDonagh and Skjei. Maybe Smith. Maybe Girardi, who before yesterday was somewhat decent. But no worries, there will be no changes on defense. Status quo will win out. And the Rangers will continue to blow three separate two goal leads in the playoffs.