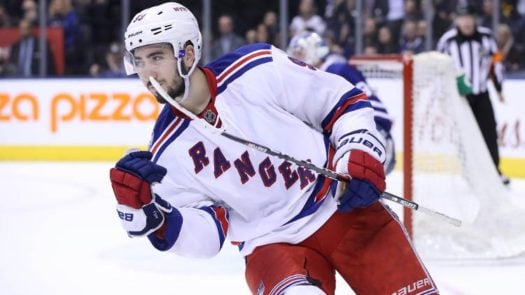 When teams are struggling to score it’s easy to look down a roster and pick off players with the zeros. While Chris Kreider has been nearly invisible this playoff series, I have noticed that Mika Zibanejad has been getting flack. Zibanejad will forever be linked to Big Game Brass, a fan favorite, and during the playoffs it’s easy to be nostalgic. Zibanejad has only one point thus far, while Derick Brassard has five. It’s easy to see the frustration some fans have for Zibanejad, but that’s a very small window for comparison.

Brassard came to the Rangers during his 25 year old season in the NHL. That is already one later than Zibanejad (who is also five years younger), who just turned 24 a few days ago. Before Brassard came to the Rangers he was seen as a risky center with injury history that had been unable to reach his potential with Columbus. The Rangers helped mold Brassard and utilized his skill properly by placing him with the right players. Low and behold, Brassard blossomed in front of our eyes. So why are we so down on Zibanejad?

Zibanejad, in 25 less games, only had two fewer points than Brassard this year. They also have nearly identical faceoff numbers this playoffs, with Zibanejad succeeding at a slightly higher clip during the regular season.

Brassard and Zibanejad are producing the same amount of shots this playoffs as well. The catch is that Zibanejad has done it in nearly 2 minutes less of ice time per game. Zibanejad appears to be more snake bitten than a passenger in this series. Will Zibanejad become a clutch player like Brass was in the playoffs? It’s impossible to predict, but we as fans can’t say that it is impossible.

All that said, Zibanejad does need to be better. His play right now in the playoffs has been less than ideal, and after coming back from the injury he has been inconsistent. I think that gives him a pass in the grand scheme of things. Just like Brassard had difficulty establishing himself in the NHL after his injuries, I think Zibanejad is experiencing this as well.

Prior to the leg injury, Zibanejad was on pace to shatter his points-per-game career high –he still set a new career high, though– and he was trending up from every previous season. The thing is, players need to get into the rhythm of things, and that is what makes injuries a double whammy. Not only does it effect you physically, but jumping back on the ice and into the responsibility that Zibanejad has as a top-six center, penalty killer, power play quarterback, and one of the reliable defensive zone face off takers it’s excruciatingly difficult.

After the wonderful Game 4 by the Rangers, it does look as if he is starting to come around into the type of player the Rangers need. He threw that open ice hit on that turtle neck wearing fraud (Plekanec), so at least we know he wants the puck. He took important defensive zone faceoffs and he had a couple of nice chances. If just one went in maybe the tune would be a little different.

I believe in Zibanejad’s skill. I truly think a lot of his average to even subpar play at times can be attributed to his injury. With that said, the sooner he gets back in the rhythm of things, the better chance the Rangers have to move on to the next round. Zibanejad was a possession driver in the regular season, and we need to see more of that.

But when comparing to Brassard, we need to keep age in mind. Zibanejad has a better track record at this point in his career than Brassard. Will he ever be as good of a playoff performer as Big Game Brass? Boy I hope so. But one thing is for sure, Zibanejad on his game is a difference maker for the Rangers. Maybe reuniting him with Chris Kreider and Pavel Buchnevich is what the doctor ordered.