Thoughts prior to Game 2 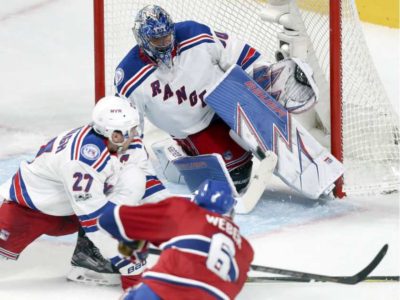 To the surprise of many, the Rangers went out and stole game one against the Canadiens at the Bell Centre on Wednesday night, shutting out the Habs 2-0 on the back of the ever so rare Tanner Glass goal and turn-back-the-clock brilliance from Henrik Lundqvist. With game two looming this evening, I have some thoughts on game one and where the team goes from here…

1. Forgive me for beating a dead horse, but the performance of the defense was nowhere near what is necessary to get past this round. Nick Holden was abysmal. I would like to see Clendening in for him, but honestly, I think I would take Klein over what I saw from Holden Wednesday night.

2. Lundqvist looked the best I’ve seen him in a while on Wednesday. He looked fast, his angles were sharp and he was visually locked in. His puck tracking looked clean and his movements were efficient and fluid. Price on the other hand, never looked bad, but he never really got in his typical groove. The Rangers had him uncomfortable. He made some top-notch saves, but they did not look at natural as they typically do. He is always going to be ridiculously tough to beat consistently, but this is good foundation being laid by the offense.

3. If the Canadiens think this series can be played in the middle of the ice, I really like the Rangers’ chances. The offense has too much talent to be confined by a perimeter strategy. The Habs needs to force the pucks to the walls and force the Rangers to win those battles.  We will see how Claude Julien adjusts in game two. Now, I’m obviously not advocating that this happens, just an observation.

4. Who didn’t think Glass would step into a contested face-off and go bar down on the backhand. I’m pretty sure half of Twitter called that before the game.

5. That said, it is still a good result from bad process. There are superior options sitting the press box, and I really hope the sub-optimal lineup doesn’t come back to the bite the Rangers.

6. Back to the defense, there were far too many times, especially on the penalty kill that the Rangers failed to clear the zone when Montreal was mounting pressure. Girardi and Staal lost countless winnable footraces that allowed the Canadiens to retain possession. This type of breakdown has a high probability of haunting the Blueshirts later on in the series.

7. The whole goatee thing the team has going on? No. Just stop. For the love of God. I beg you. Whoever decided this was a good idea deserved to get whacked on the nose with a rolled up newspaper.

8.The NHL is in a tough spot when it comes to west coast games. It’s very difficult to engage with east coast fans due to the start times. There is a lot I’m willing to go to take in the whole playoff experience, but when I have to get up at 6am, I’m not staying up until 2am to watch the Ducks and Flames. I don’t have a good solution, because 4pm start times aren’t fair to the local fans, but considering the volume of hockey watchers on the east coast, it’s got to be a tough marketing pill to swallow.

9. So far, it’s looking like some plucky upstarts will give us reason to think they can push the favorites and create an upset environment, only to slowly give it back. The Leafs and Oilers have been such a tease…

That’s it for me this week. No matter what happens tonight, taking back home ice advantage from Montreal is a good result. Hopefully the team can build off of the things that worked on Wednesday and cut out some of the miscues. Only time will tell. Enjoy the game, everyone!