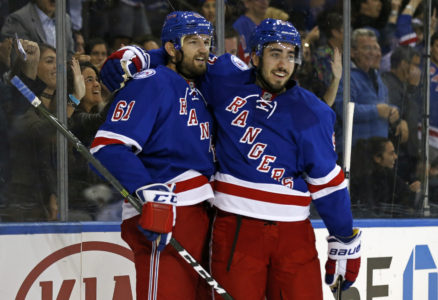 After a semi-frustrating loss to the Islanders on Wednesday, the Rangers now have eight games left in the regular season. They have a 12-point lead in their spot for the first wild card and a 14-point lead for the second wild card. At this juncture, it’s pretty clear they are going to be playing the winner of the Atlantic Division, the only question is whether Montreal will be able to hold on or if Ottawa will overtake their current three point lead. At this weird spot in the season, I have some thoughts…

1. I honestly can’t remember a time the Rangers were playing games with little to no significance this late in the season. The loser point has effectively tightened each race enough that there is still meaningful hockey being played up until the end. Even the last time the Rangers missed the playoffs, it came down to the last shootout shot. Just a strange set of circumstances.

2. I’ll be very interested to see how Henrik’s workload is managed over the next couple weeks. Depending on how ready he is, there is enough space between games (with the exception of the final two) to just run him out there and ramp up to the playoffs if the coaching staff so chooses. Alternatively, they could keep Raanta worked in there and give Hank say, six of the last eight. Selfishly, I will be at the game in Ottawa on April 8, so as long as Hank plays that game, I’ll be happy.

3. I’ve been thinking a lot about fan frustrations with AV lately. I believe, psychologically, that the biggest problem is AV’s refusal to acknowledge that he understands his lineup construction is counter-intuitive. If he said to the press, “look guys, I understand all the stats are saying Buch and Clendo should be in the lineup, but Tanner and Kampfer give us a dimension that I feel we need right now, and I’m going with my gut”, I think people would be pissed, but not this pissed. It’s really the seemingly lack of recognition about what both the eye test and empirical evidence support: the wrong guys are being scratched.

4. For a lot of this, I actually blame Torts. Torts had the media so gun shy to confront him because he was a raging lunatic that they seem to treasure this stasis that they have with AV. They don’t seem to have any interest in calling him out on questionable decisions or adjustments that aren’t made. If they opened a dialog about these decisions, there would 1) be more accountability from AV and 2) fans would understand his rationale, even if they disagreed. Right now, his dissenters just think he is incompetent because he has done nothing to suggest he is aware of the perception of his moves.

5. As for the moves themselves, if you have been reading my work here long enough, you know where I fall in. The bigger problem is the growing pains that happen when a sport transitions from era to era. This is compounded when AV, who seems to fancy himself a progressive coach, makes old school decisions. This is really a subject for a longer post, but the idea of chemistry or energy or “guys picking the team up by the bootstraps” is an elusive concept and very difficult to quantify. Personal loyalty also plays into it. We, as fans are objectively moving pieces around the board to create the most winning formula. AV and the coaching staff are managing the expectations, motivations and personal goals of human beings. Bias is bound to creep in.

6. I think there is also a fear/insecurity component. If the fans clamor for a move and the coaching staff makes it, it’s on them. If it doesn’t work out, we can shrug it off and go back to our day jobs without another thought. AV may be terrified by giving a Skjei and Clendening pairing 20+ minutes a night, even if they deserve it. In his gut, the likelihood that a rookie and a younger journeyman might get exposed is too great a risk for him to allow for.

7. This of course is all devil’s advocate. Of course Buch and Clendening should be in the lineup over Glass and Kampfer. Especially in this stretch of meaningless games. Give Buch 20 minutes a night and see how he handles it. Skjei and Clendening should be your second pairing in the playoffs, so give them more reps together. God help us when Girardi and Klein get healthy.

8. Nick Mercandate had a tweet the other night that just made me smile:

Rick Nash is a super ice hockey player that should be cherished for what he is. Not what you want him to be.

This is the way we need to feel about Rick Nash. I feel like there is a large section of the fan base that equates a $7.8 million salary with 40+ goals and nothing else. Of course, Nash is not worth his cap right as I type this post, but his is a tremendous player with such a multi-dimensional skill set that every time he steps on the ice he helps this team.

9. I’m all on board with the concept of trading Antti Raanta this offseason. His play this year has earned him the right to seek an opportunity to start. For my money, Benoit Allaire is the best in the business and if you give him a guy with athleticism that hasn’t quite put it together, Allaire can turn them into a super backup. Goaltenders like that grow on trees, and if you can get quality assets for Raanta, then by all means.

Since we are in uncharted waters as far as the significance of the remaining games, I would encourage everyone to just watch stress free. We can easily flip the switch back to “what the f#$k are you doing, AV?!?!” mode once the postseason starts. Let’s try to give the ulcers a break and enjoy eight more games without destroying our livers. That comes later. Have a great weekend, everyone.