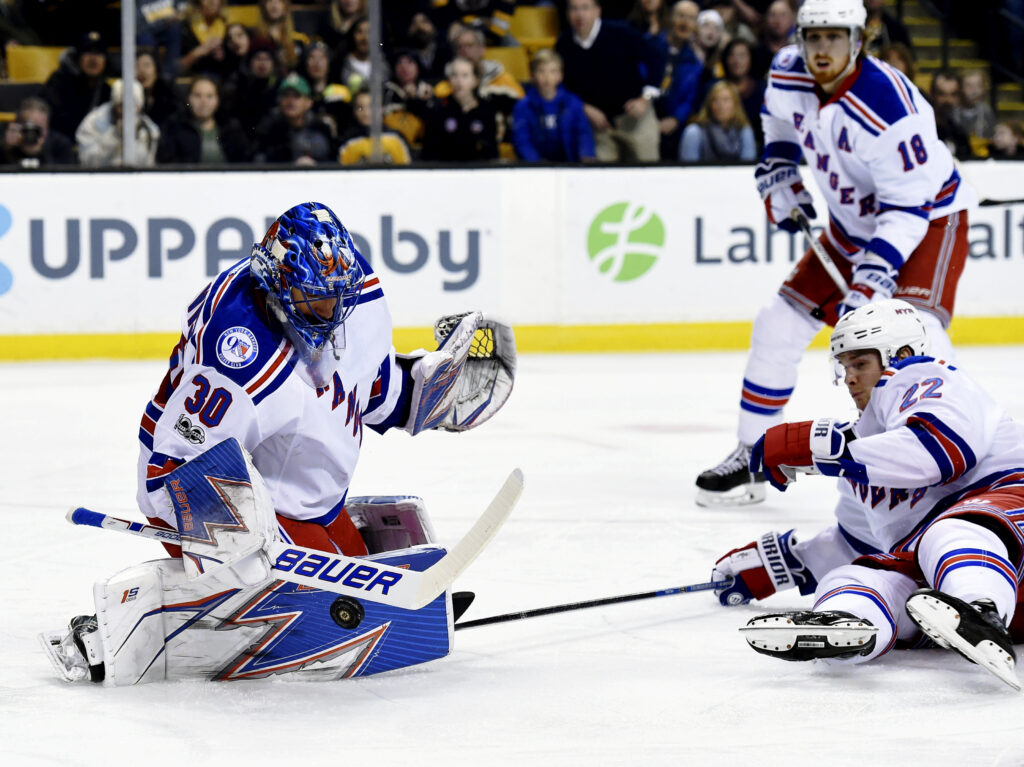 I know, I know, Dave just gave his thoughts on the deadline yesterday, but Dave and I are not the same person.  Deal with it.  It’s been a couple days since the deadline has passed, and I have had the ability to process the Rangers moves (and non-moves) and as you can imagine, I have some thoughts…

1. Considering Alain Vigneault’s track record with defensive deployment, it’s understandable for fans to be skeptical about the actual impact of the Brendan Smith trade. With someone like Shattenkirk, it would be a no-brainer to put him on the first pair. With Smith, depending on your view of his skill level, he could play anywhere from 1RD to 3RD. It seems like the Wisconsin connection with Ryan McDonagh has him ticketed for the first pair, which is a good thing. I don’t believe that Smith is an actual 1RD by any stretch, but since the Rangers gave up some relatively significant assets to acquire him, I’d much rather he push guys down the line up, than lengthen it from the bottom.

2. I suppose the bigger picture story is the non-acquisition of Shattenkirk. Every #hockeyinsider at one point or another had indicated that the former Blue had effectively forced his way to New York, ala Rick Nash. Seems that wasn’t meant to be as Washington ponied up for the rental version of Shattenkirk. On one hand, losing a really valuable puck moving defenseman to the best team in the conference is a big blow to the Rangers realistic Cup chances, but in hindsight, I’d rather the front office stay out of a bidding war with the Caps and look to bring him in this summer.

3. I’m glad the Rangers did not go out and try to acquire a “gritty veteran” forward at the deadline. They have no real need for additional forward depth and an acquisition of that type would have just removed skill from the lineup. If this were say, five years ago, something tells me Shane Doan would have been wearing blue last night.

4. I was a little bummed to see Mat Bodie go. I know it’s a relatively insignificant move in the grand scheme of things, but I enjoyed watching Bodie play for Union College (which is about 20 min from me), so there was a local connection there. Good luck, Mat.

5. That Marchand goal last night was just such a microcosm of the Rangers defense.  The Holden/Staal Disney on Ice impression was something special to watch, though.

5. I’ll be very curious to see Jeff Gorton’s blue print for the defense this summer. It seems that the desire to bring Shattenkirk aboard is there, but how he deals with potentially re-signing Smith and the tough decisions on Klein, Staal and Girardi will make for some off-season intrigue. The Rangers have a couple key RFA’s in Mika Zibanejad and Jesper Fast to factor into those calculations, as well. I think everyone would be fine with a McDonagh/Shattenkirk, Skjei/Smith, Clendening/Staal blue line for next season, but I will be very curious to see if some combination of Klein, Girardi and Staal will really be jettisoned.

6. Isn’t it crazy that Henrik Lundqvist just turned 35? He is almost exactly one year older than I am, but I still take it for granted. It seems like yesterday that he was one of the best young goaltenders in the game. At 35, he is clearly not entering the twilight just yet; I would even argue that despite his rough start to the year, he isn’t even really declining. Looking at Hank on a historical curve, Dominick Hasek won a Stanley Cup at 43 and Martin Brodeur played in a Stanley Cup Final at 39.  It’s not necessarily all downhill from here.

7. With eighteen games to go, the Rangers enter a fairly grueling part of the schedule. They have four (!) back-to-backs this month and fifteen total games. The quality of competition isn’t anything special, but after all those back-to-backs, they take a three game west coast swing before returning home to play Pittsburgh. It would take a fairly monumental collapse to have a playoff spot threatened by a downturn in play, but unless they really carve up this schedule, it’s looking more and more likely that they will cross over to the Atlantic come playoff time. Which, I don’t necessarily think is a bad thing.

8. Oh, one more thing.  How ridiculous were those Buchnevich and Lindberg goals?  Wow.

That’s it for me this week, the boys are back at in against Montreal tomorrow before a back to back down in Florida. Enjoy your weekend, everyone!