The pressure is on Jeff Gorton 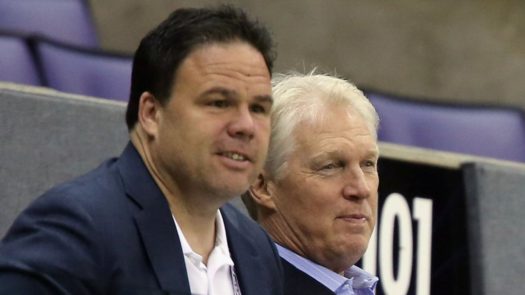 Jeff Gorton has done a masterful job remaking the Rangers’ forward corps and deserves full credit for that.

But as the trade deadline closes in without any apparent blueline solutions on the horizon that don’t cost an arm and a leg, it’s fair to ask – what was the plan on defense?

The decision to let Keith Yandle walk was puzzling, but with Yandle having a poor year and his not insignificant contract, we’ve largely given Gorton a pass on that.

And indeed, the acquisition of Nick Holden has worked out marvelously. Paying a mere fourth-round pick for arguably New York’s second-best D-man was a coup.

But here’s the key question: was that it?

The issues on defense were glaring heading into the summer and have only become more magnified. Gorton’s lone move for Holden was clearly not enough to propel this team into contention and everyone knew it at the time.

Maybe, just maybe, Gorton was right to have faith in Marc Staal and Dan Girardi – believing they might have more left than all their harsh critics thought and were capable of contributing for one more run.

And if that didn’t work out, a number of intriguing players churned through the rumor mill as training camp began – from Hampus Lindholm to Dougie Hamilton to Jacob Trouba. Perhaps those never were realistic possibilities, but they at least gave Ranger fans faith that Gorton had a contingency plan in case the house of cards came crashing down.

But now here we are. One week until the trade deadline, with no savior in sight. Sure, Kevin Shattenkirk looms large. But the Blueshirts would be fools to meet the Blues’ asking price when they know Shattenkirk is interested in joining them this summer and dealing for him now would cost them at least one untouchable asset like Kevin Hayes, J.T. Miller, Chris Kreider or Pavel Buchnevich – plus much more.

Beyond that, the Rangers could attempt to patch their sinking ship with Scotch tape in the form of rentals like Dennis Wideman, Cody Franson,  (traded since this post was written) or Dmitry Kulikov. Acquiring one isn’t out of the realm of possibility, and the latter two might really be decent players. But no one in that group is nearly enough to propel New York into that upper echelon of contenders.

It’s another lost season of Henrik Lundqvist’s prime – or perhaps the first of his twilight years.

Looking at the apparent plan from all angles – it just wasn’t good enough. Perhaps Gorton will pull a rabbit out of his hat this week, but it’s hard to envision.

Instead, this traffic cone defense is doomed to be embarrassed. And it’s not as if we all didn’t see it coming.