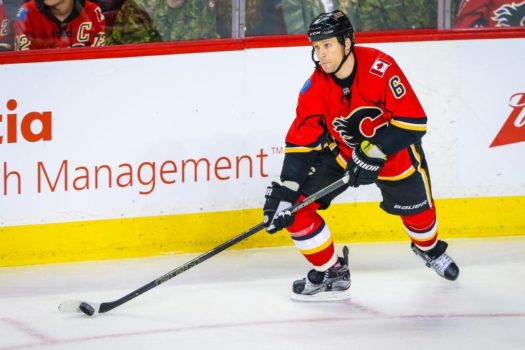 Dennis Wideman is perhaps best known for crashing into a referee last season, which earned him a 20-game suspension. However, he’s just two seasons removed from a 56-point campaign in 2014-2015 – the fourth-most points in the league amongst defensemen that year.

Wideman, 33, has been a workhorse throughout his 11-year career, averaging over 20 minutes a night in 10 of his 11 seasons. He’s nearing the end of the line though and has seen his ice-time reduced over the last two years, especially on the power play.

Calgary is flush with puck-moving defenders including Dougie Hamilton, T.J. Brodie and Mark Giordano – so depending on the Flames’ standing in the playoff race as the deadline approaches, they could choose to cash out on Wideman, a pending UFA.

Like some of the other options we’ve discussed including Ryan Murphy and Cody Franson, Wideman could be had on the cheap. But there’s a reason for that – Wideman would be a mild upgrade for New York, but his best days are behind him and Wideman isn’t the kind of acquisition that would dramatically move the needle for the Blueshirts.

For some more background on Wideman, I sent a few questions to Ryan Pike of Flames Nation:

Q: There was a ton of controversy around Wideman for the ref incident last year. How as he responded? What about teammates and fans?

A: There’s been a bit of a fan conspiracy theory that the Flames haven’t gotten borderline calls from the referees since Wideman collided with that linesman a year ago. The numbers don’t support it, but the theory perpetuates. In terms of how he’s responded, Wideman has remained the same basic bottom-pairing defender he was, though he’s become a bit less consistent this season compared to last season in terms of his defensive zone play.

Q: Wideman has seen his power play ice-time cut by more than half, but he’s still playing a bunch of minutes for Calgary. To what do you attribute this shift in responsibilities?

A: It’s been a mixture of circumstances, really. The Flames changed power play coaches over the summer with Dave Cameron’s arrival, and they’ve been using Kris Versteeg on the right point of the first unit and Dougie Hamilton as the right point on the second unit. It seems like the logic has been loading up the PP units with right shots and offensive-minded players. Wideman was used as the right point for a little bit earlier in the second, but he lost his spot to Hamilton when they shuffled their units in November.

Q: Wideman is just two years removed from a 56-point season – has age caught up with him?

A: In short? Yes, but a lot of his production was based on some really strong shooting percentages in 2014-15. The arrival of Hamilton, the normalizing of his percentages and his drop from the second pairing down to the third pairing has resulted in fewer opportunities to put up offense.

Q: What are Wideman’s strengths and weaknesses? How would you describe his career arc right now?

A: Wideman has a really good shot from the point and he’s generally a pretty good distributor of the puck. Unfortunately, he’s lost a step and since he never really had great defensive instincts, he’s really been exposed defensively this season.

Q: With Calgary teetering on the fringe of the playoff picture, are you of the opinion the Flames will look to deal Wideman or hang onto him for a postseason run? If they trade him, what would you expect for a return?

A: Honestly, they’ve likely been trying to trade him for a couple of seasons. Between his reputation as a fairly one-dimensional player, his declining foot-speed and his big cap hit, he’ll be really tough to move. I imagine they’ll keep trying to do it, but I’m not expecting much. I imagine they’d be satisfied if they can even get a mid-round pick back for him.

Big thanks to Ryan for the help with this post – be sure to check out his site!