Forwards in the OHL to keep tabs on 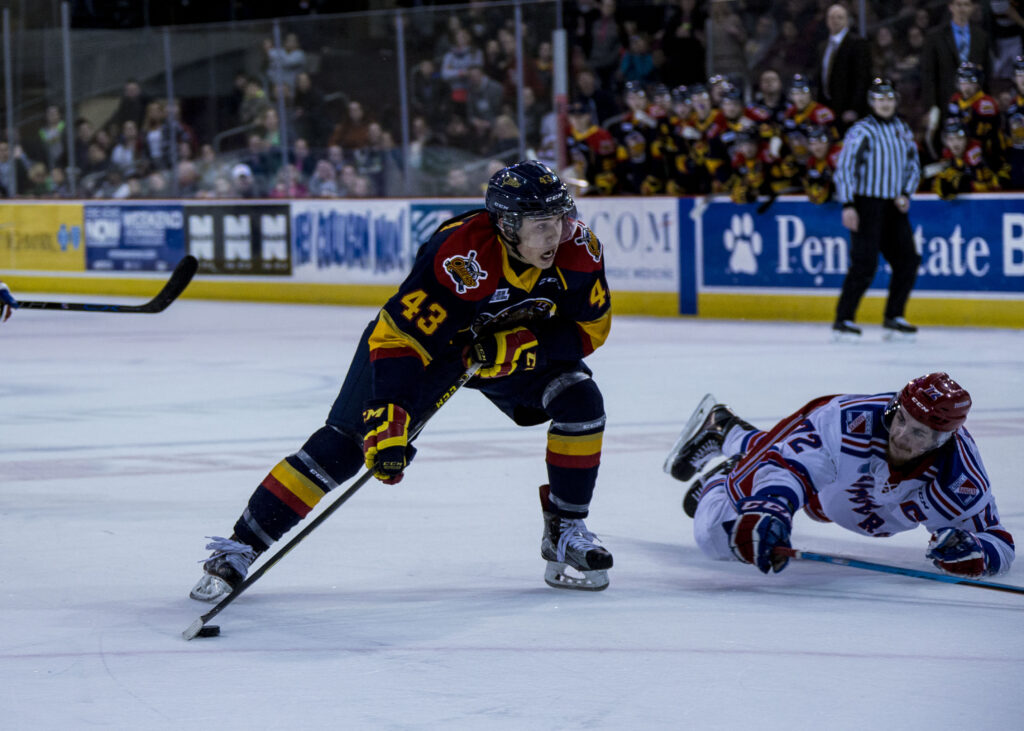 For those who may not follow me on Twitter, I have been improving on the draft trends that I made last year. For this current season I decided to include every player playing in Major Junior, not just the draft eligibles. Thanks to the wonderful work by @3Hayden2 (creator of prospect-stats.com), I have been able to make more comprehensive views. I only have the OHL completed right now, but I’ll have the other leagues up soon.

Before looking at the players, it’s important to understand how these should be read. The visual consists of numerous parts. First, we have the basic information about the player. It is very important to look at the age when we are looking at how they perform. An older player should be expected to be great in Juniors, as they play  against younger and less developed kids. But a draft eligible kid (18 years old) performing strongly can make for an interesting potential sneak pick in the mid rounds.

The next part of the visual is the Stat Spread Splits. I have separated the visual into 5v5 and all situations. Many people tend to value 5v5 statistics more because that’s where the majority of the game is played. Most of the time, when stat spreads are being looked at it is at all situations, and that plays a big role in where a player can be ranked for the draft. However, a player with better 5v5 stats may actually be the better value pick than the player with better all situations stats.

Here comes the “fun” part. The next section of the visuals is the 5v5 season trends. Every 10 games I have plotted their stats to see how they perform over the course of the season. Finally, we have the stats bar which is pretty much the HERO charts we use regularly, where based on the players’ stats they fall into specific quartiles that can be similar to producing like a 1st, 2nd, 3rd, or 4th line forward. 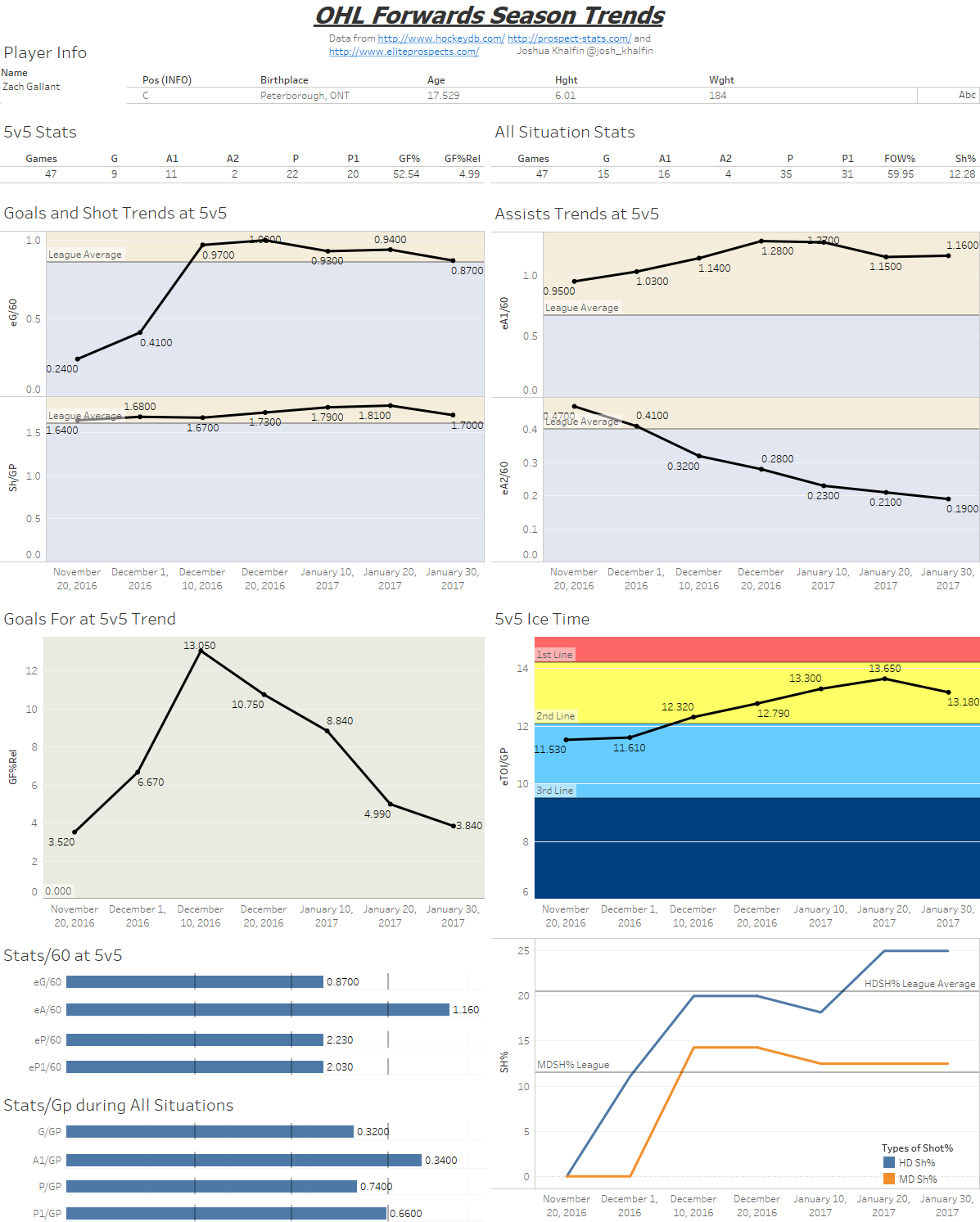 Zach Gallant- Gallant has been seen as a draft riser recently, but might be a great value pick in the mid-rounds, where the Rangers are known to draft high-ceiling players. He is not huge, but the center plays a pretty big game and uses his body well. Numerous scouts have noted issue with his acceleration and speed, but he is difficult to knock off the puck because he defends it well with his body. This also helps him with faceoffs, where he excels and could possibly be a quality bottom-six player.

Looking at the his trends, his primary points (goals, first assists) are fairly stellar. At 5v5 he has 22 points, 20 of them are primary. In all situations, 30 of his 33 points are primary. He is a catalyst on offense, not a passenger. Gallant has been efficiently converting on his high-danger scoring opportunities at much higher rate than the league average, which has led to increased ice time. He is ranked 71st among North American Skaters by Central Scouting at the moment, and he will likely be a 3rd or 4th round pick. 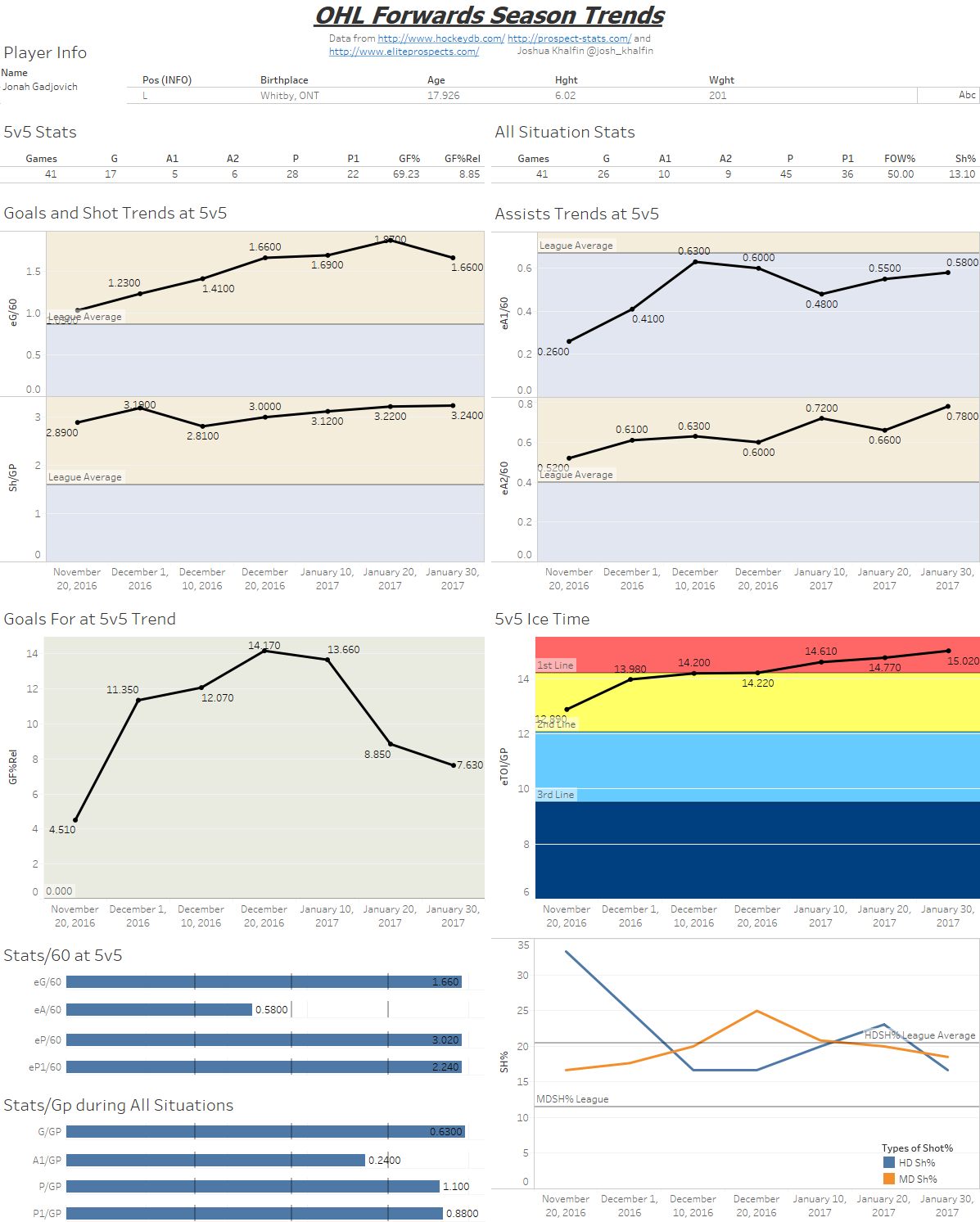 Jonah Gadjovich – Another possible power forward, Gadjovich isn’t hulking but the 6’2 winger uses his body incredibly well. He also has a shoot-first mentality and the shot to go with it. All you need to look at is his SH/GP trends to see that not only is he significantly above the league average, but he is also remarkably consistent at getting pucks on net. Gadjovich is a “sudden” riser, but the trends show us quite simply that he is cashing in on his high danger scoring chances now, leading to much better goal scoring numbers.

On top of his scoring, Gadjovich is a great forechecker and strong against the boards. He also just looks like a really smart player. His positioning is a product of his on ice intelligence and he can break passes up leading to offensive zone turnovers. Gadjovich is ranked 60th among North American skaters. 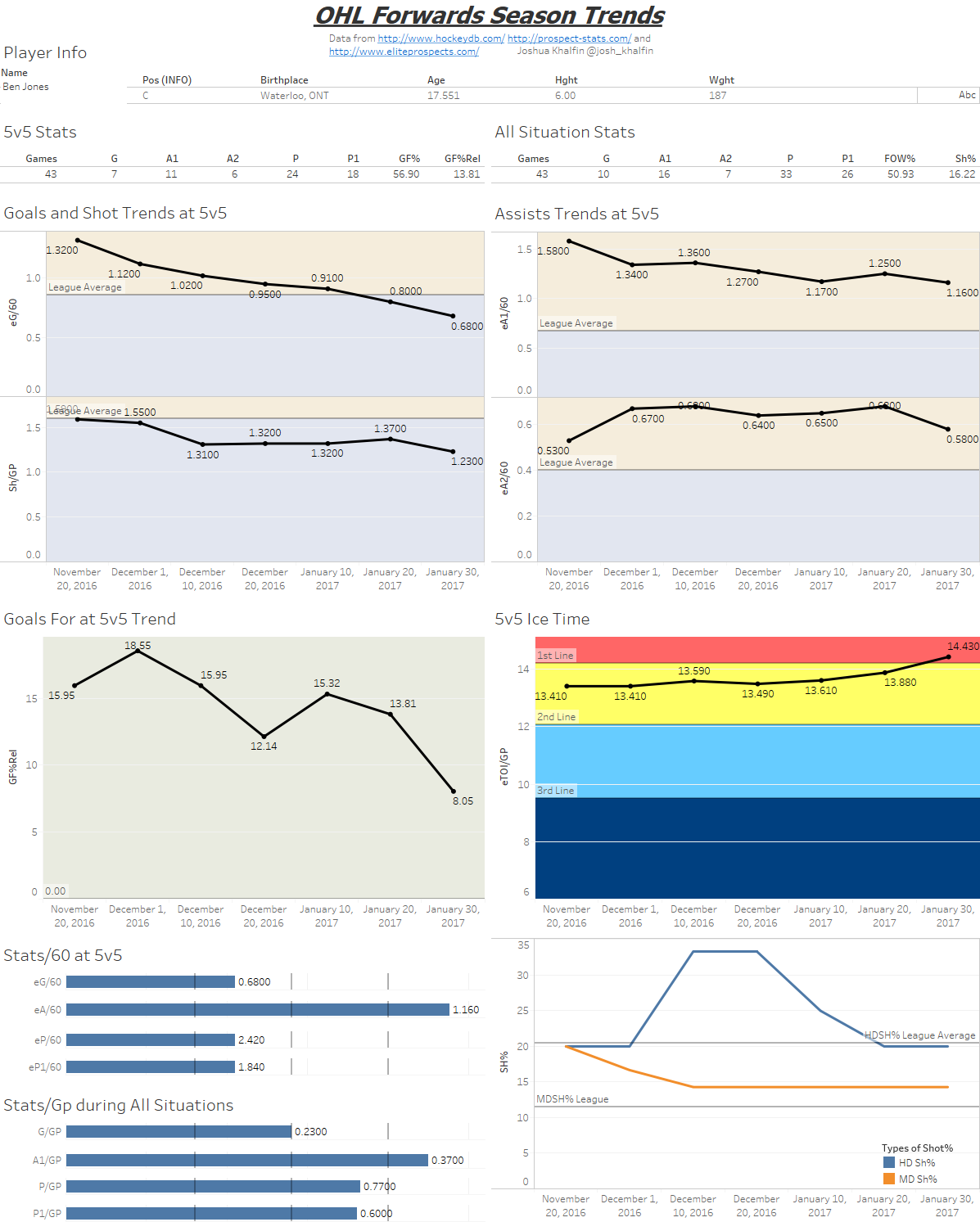 Ben Jones- Ranked 99th among North American skaters, Jones looks like he can be one of those mid-late round picks that perhaps has similar stats to possible early-mid rounders. I personally feel that Jones projects to be a quality two-way forward, but unlike Gadjovich and Gallant, who use their bodies, Jones does it with speed. While not as incredible on the dot as Gallant, Jones is still very young and his 52% FOW% is quite respectable.

When watching Jones, it’s pretty nice to see that his hands actually can keep up with his skates. That said he does get pushed off the puck fairly easily and he is not exactly consistent every shift on the ice. I think that is still worth the risk, as he has the tools that can be useful in the NHL. Age, maturity and a pro regiment should help him develop these apparent weaknesses.

Jones may begin sliding down the rankings because his offense is beginning to slow down. Looking at the trends it can be seen that his conversion rate on his top scoring chances has regressed to the league average, but his defensive play cannot be overlooked. If he does slide down the rankings I am sure the Rangers would enjoy taking a risk on him as they love to draft a two way forward with speed every draft. 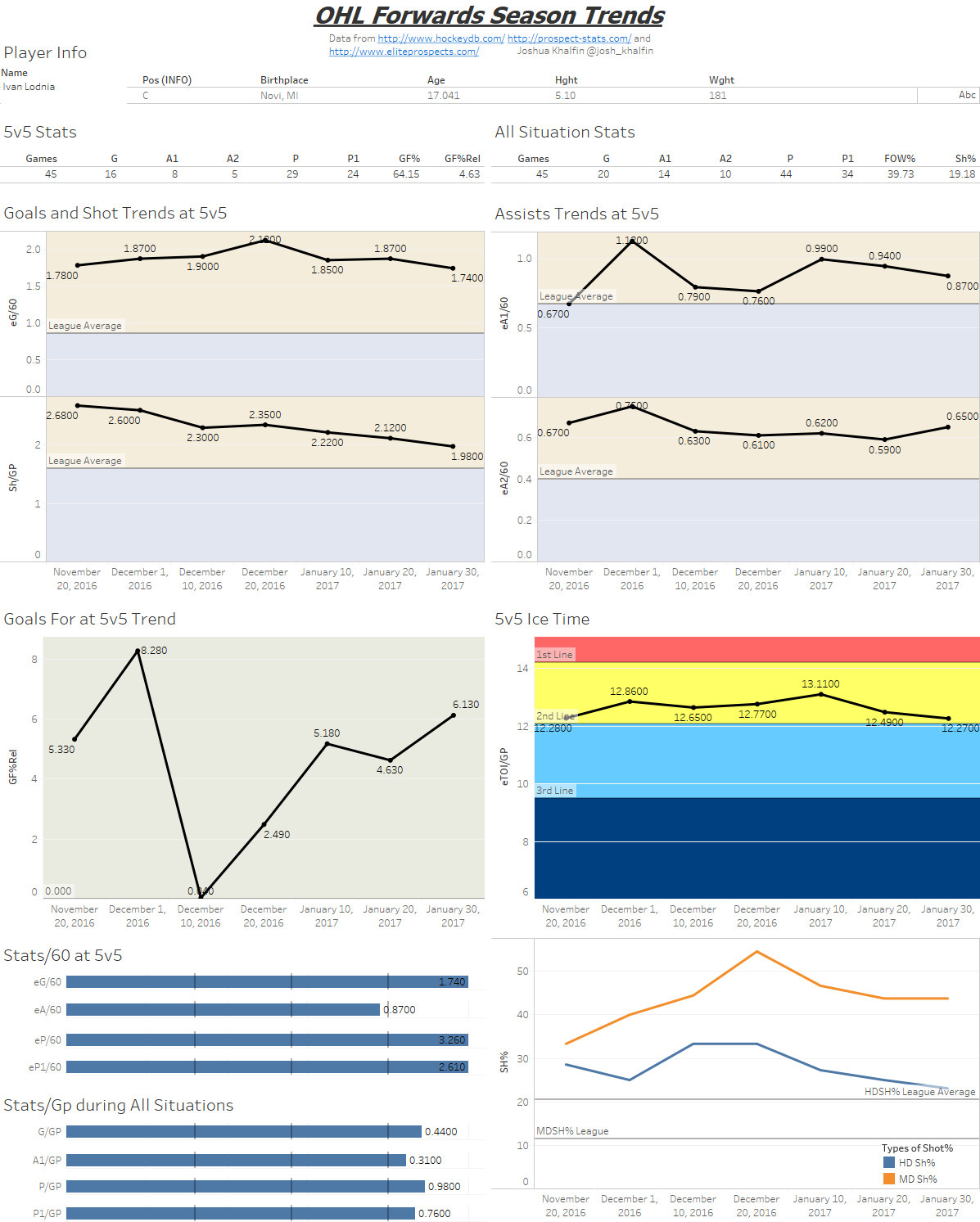 Ivan Lodnia –  Here is one of my favorite forwards in the entire draft. I have talked about “Vanya” a lot over the last week on Twitter, as he is a skilled future sniper in the NHL. He doesn’t let his 5’10 frame slow him down, as his work ethic every shift makes him an incredible possession player and a danger any time he is on the ice. He prefers to attack on the off-wing but he has multiple points of attack. He will beat you with a snipe or he will beat you in the blue paint. It doesn’t matter, Lodnia puts pucks in the net.

Lodnia has consistently outscored the league average, but I am in shock whenever I am looking at how his high his shot % is for both High and Medium chances. He literally dwarfs the league average. Some can make the argument similar to that of Alex Debrincat, where you can attribute the success to his stacked team. However he actually doesn’t play much with Debrincat or Dylan Strome, and his GF%REL is consistently high. Lodnia looks like he will be a steal, it’s unlikely that he goes in the first round, but he could be a second or third rounder.