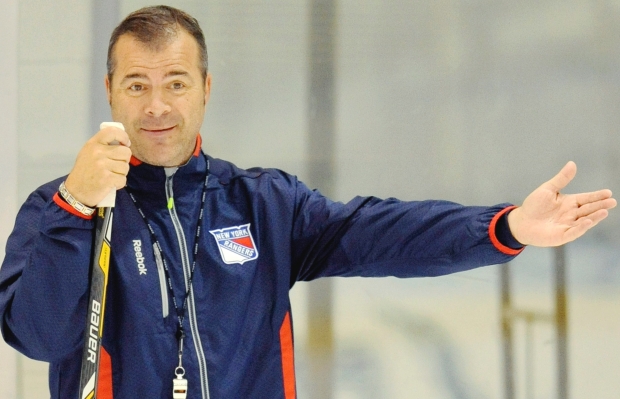 It seems like ages ago that New York and Vancouver took part in a Coach Swap, something each team needed. Long tenures are tricky because coaching flaws can begin to show. If the coach isn’t willing to adapt, their future with that team looks murky.

It’s how they create reputations and the reason that so many get hired, as is evidenced by that Rangers wife-swapped squad; tired of the aggression and hard-nose, “gritty” hockey, the Rangers opted to hire the offense-minded Vigneault who had come very close to Stanley Cup glory in the Northwest.

It is because of this tenure that in Vigneault’s fourth season on Broadway, his coaching grade would be clearest. We’re halfway through a season that has seen some strange ups and downs, with an xGF% with peaks and valleys resembling a mountain range. What this means for eye-test aficionados is that your blood pressure spikes and mood swings are actually quantified with a fancy stat. What a time to be alive.

All of this takes away from the topic at hand: how can we grade Vigneault’s performance? First, we need to separate out what Jeff Gorton and the front office has done with this team. A strong — really, some of the strongest in the league — corps of forwards, with enough depth to kinda sorta manage despite losing two for a third of the season and one for extended periods of time, a porous defense (let’s just keep it there), and one generational talent in net every night with one very competent backup. Benoit Allaire consistently gets an A in these report cards, for the record.

A good coach adapts; if they aren’t willing to, it usually ends in their firing. We all know the Rangers defense is lacking — if you dispute this, you haven’t been watching the game or analyzing stats. In fact, you may be looking for a blog for the different team altogether. But let’s start with where Vigneault exceeds.

He’s great with the media. He’s good with forwards and tends not to break up lines that have been playing well with one another. He knows how to get a lot out of his team, urges the importance of moving your feet, and hell, he’s even gotten Chris Kreider to utilize his size and get in front of the opposing net. It’s not a coincidence that Kreider is blossoming as the player we all knew he could be with a coach who knows offense. Additionally, AV holds players accountable… sometimes.

But Vigneault is stubborn. He’s frustrating as all hell with his player choices. In the face of a defensively challenged team, Vigneault spent a whole bevy of time juggling forward lines and toying with healthy scratches. My personal favorite moment of this season so far was when he called out Henrik Lundqvist in the postgame. That was pretty, pretttt-ay good.

While I want to give AV the benefit of the doubt, the story arc and similarities to what happened with his Canucks teams are looming nearby. Consistently playing Dan Girardi, an aging defenseman (that’s not a fancy stat, guys, that’s basic math), over 20 minutes per game when the idea was to rest defensemen doesn’t sit well. Much like a cheating spouse, no amount of phony words will mask the fact that Girardi is getting top pair minutes every single game despite being not-good-at-hockey.

This loyalty is really nice, but this isn’t a scorecard for congeniality. The major changes that need to be made are in the hands of Gorton, but AV pairing Girardi with McDonagh (who’s had some gaffes and lapses of super heroism this year) again in the game on Saturday is telling. It’s worrying.

Above defense issues, the most glaring issue is the lack of consistency. Early in the season, the team played a complete 60 minutes of dominant hockey. This hasn’t been the case for several weeks now. Injuries have taken a toll on the team, but injuries have taken a toll on every team halfway through the season. A team that is as wildly inconsistent as the Rangers have been for the majority of the season is troubling.

Nobody knows what the future will hold, or if the Rangers will go far in the playoffs. We’re only halfway there, after all. But I’m sticking AV with a very average midseason grade. He has to stop selecting those he wants to hold accountable and utilize players to their maximum potential. He has to sit his older players in an effort to keep them fresh for the postseason run. He needs to stop calling out the face of the franchise to deter attention away from the fact that his D corps is pathetic at best.

Despite anything that can be posted here, AV is beginning to become a polarizing figure in Rangerstown.

Vigneault gets a C so far. Let’s see what the rest of the season brings.