What a game. If you had told me after 20 minutes that the Rangers would end up winning this game I wouldn’t have believed you. After a dreadful start to the game – it was all Columbus – the Rangers staged a daring comeback win in the third period, with the icing on the cake being Michael Grabner’s game winning goal on a breakaway with 16 seconds left. A win against the Blue Jackets is no joke either, with the team recently coming off of a historic win streak and sitting pretty at the top of the league standings. In second place of course are our very own New York Rangers, who picked up a big two points with tonight’s win.

Nutivaara gets this play started and finishes it too for the goal, first knocking the puck out of the air as the Rangers are trying to clear the zone, allowing Cam Atkinson to scoop it up. Atkinson then sends it back to Nutivaara at the top of the zone, where he walks the line briefly before letting it fly. Not exactly sure I would pin this one on any particular Ranger, but I would note that the Rangers were not exactly cool and composed on the clearance attempt and as a result looked out of sorts as Nutivaara cued up the shot.

This is another one that starts off with a failed attempt to clear the zone, although granted the Rangers were short handed so it’s much more difficult to accomplish. The Jackets get the puck down low, where Dan Girardi challenges for the puck. It’s popped out to the goal line for Sam Gagner, who then slides it right across the crease for Atkisnon to finish. A tough break to go down 2-0 early in the game, but it was one among many Rangers penalties – one of them was bound to end poorly.

Lindberg gets his first of the season on a beautiful snipe to finish a two-on-one. Rangers clear the puck out of the zone, with Michael Grabner and Oscar Lindberg chasing after it. Grabner makes an excellent stick play to bat it over to Lindberg as two Columbus defensemen are closing in on him, springing the odd-man rush. Lindberg then picks the corner and the Rangers are on the board.

Klein chases a puck down low and attempts to clear the zone but has it taken away on a poke check by Sam Gagner. Gagner then continues on down towards the area behind the net, flinging the puck in front as he does so. Hartnell’s in the right place at the right time and the Jackets extend their lead.

Columbus shows the Rangers how to properly execute a transition play with this one. Scott Hartnell flings the puck up ahead for Sedlak, who gets in behind the defense. Sedlak then goes straight to the net with speed and puts it home five hole.

This one is just a pure, beautiful hockey play. Rangers win a faceoff, Michael Grabner scoops it up, and goes straight to the other end of the ice with it, using his speed to burn the Columbus defense. He lets it rip and the puck goes top shelf, cutting the Rangers’ deficit in half.

Adam Clendening gets his first of the season and makes it a competitive hockey game, with Hayes laying the puck off for Miller at the right side half boards. Miller then takes the puck behind the net, where he dishes for Clendening on the left side half boards. Clendening waits a little bit, walks in, and puts a shot on net, making it a one-goal game. Not a great look from the Columbus defense leaving Clendo all that time and space to pick his shot, but I’m not complaining.

Clendening shows yet again the virtue of simply putting pucks on net. Fast and Lindberg scrap for the puck on the left side, and it eventually gets flicked around to the opposite side. Clendening is waiting posted up right on the half boards, and he flings it towards the net, tying the game in the process.

A thing of beauty. Truly not a lot to say here – Grabner puts his speed on full display and goes to plaid, going straight to the net and flipping a backhand shot on net and winning the game with 16 seconds left. Breakaway goals are one of my favorite things in hockey (I’m guessing I’m not alone here) but especially when they cap off a comeback win late in the third period. My dog is still freaked out by all of the yelling. 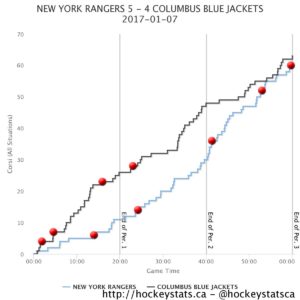 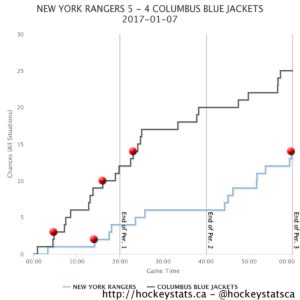 The first period is plainly the worst one here, with the Jackets controlling both the overall shots and bona fide scoring chances. Rangers got a better share of the puck possession in the second, but still not very many real chances. Finally the turned it on in the third period, especially early on when it was all Rangers.

Rangers get a bit of a break now with the upcoming bye week, and what a great way to head into it. After a tough start the Rangers showed a lot of resilience, sticking with it until the very end. Grabner, Lindberg, and Clendening all had standout games, and of course Henrik Lundqvist held things down on the back end, making it all possible. Hopefully the break doesn’t kill the Rangers’ momentum, as stringing this win together with the Flyers game would be a nice way to put things back together after a few tough losses.