Has Rick Nash has become untouchable? 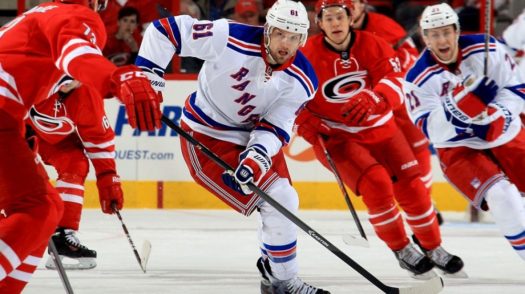 Rick Nash may never again score 40 goals in a season, but his play this season should put any debate about his Rangers’ future to bed. So long as Dan Girardi is on the Rangers blue line, and Jeff Gorton doesn’t significantly address the Rangers defense, the Rangers cannot afford to get rid of a genuinely elite two-way player such as Nash.

Nash’s play without the puck and his defensive conscience are essential to the team, as in his absence we’ve seen inconsistent play from the forwards in their own zone. The Rangers are not a good team defensively and this relative ineptitude in their own zone has only enforced Nash’s importance to the cause.

Even before confirmation that he needs to be protected in the expansion draft, Nash’s own impressive play this season should have made him a player the Rangers would have protected anyway. There is simply no replacing Nash. Whether it’s his ability as a goal scorer, as a leader, or as a two-way example to the younger players on the roster. Cap hit and age be damned.

When healthy, the Rangers will outscore the vast majority of teams in the NHL but everyone knows that during the playoffs goal scoring gets tougher. Indeed, Nash himself is exhibit A of this fact. This is where Nash’s situation becomes somewhat ironic. Assuming the Rangers get to the playoffs Nash may not even be needed, in the first instance, for his scoring but more for what he provides on the penalty kill, at both ends of the rink and for his ability to look after the puck.

While Nash has been criticised for his relative lack of postseason production in the past, he should no longer be measured by such basic numbers. Hopefully come April, the Rangers will be winning playoff games thanks to their enviable depth. Nash’s line will still draw the toughest assignments and he’s a player that can handle the attention. The Brandon Pirri’s, J.T Miller’s and Michael Grabner’s will be needed to produce. While (obviously) still important Nash’s production in the postseason will not be as critical as his ability to drive possession will be.

Nash’s importance to the Rangers can of course still be measured in production even if it is no longer his primary calling card. If Nash is back in the next game or two – and he stays healthy – he’ll come close to reaching 25 goals for the season. One hot streak and Nash could still reach 30 goals for the season despite already missing 9 games. It’s unlikely but it’s not impossible. The fact he’ll have missed a month of the season (give or take) and could flirt with 30 goals is impressive. Last season, only 28 players scored 30+ goals.

In short, Nash is producing at a strong level despite Alain Vigneault spreading the ice time around evenly and the Rangers don’t have anyone to replace him sufficiently in the short term. While Chris Kreider’s strong season is encouraging it still cannot be taken for granted that Kreider will continue to score heavily, such is Kreider’s streakiness. Nash is therefore absolutely critical to the Rangers’ Cup aspirations thanks to his all-round game and production.

The Rangers are and always will be a cap team. They have deep pockets and can afford to keep Nash providing he continues to perform so, as long as the Rangers intend on contending for the Stanley Cup, Nash must remain a Ranger. If the team has to financially sacrifice a player to help address the blueline then it should not be one of their most critical pieces – it will be on Gorton to find someone else that the team can ‘afford’ to move on from. Nash’s importance has grown throughout this season and he’s never been more important to the Rangers.