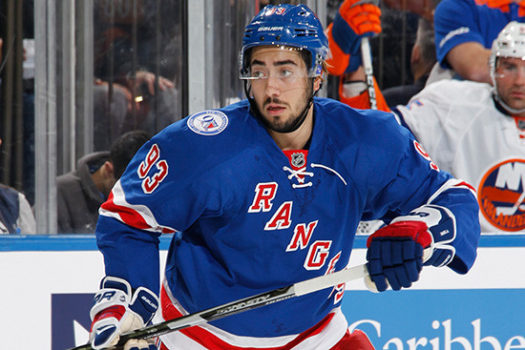 The pair of 7-goal spankings the Blueshirts took just before the holiday break at the hands of the Penguins and Wild magnified warts that had gone masked for much of the early part of the season.

There are obvious problems with the Rangers lineup, but if all goes well, they may only have to play a handful more contests before the cavalry arrives. Top center Mika Zibanejad and rookie Pavel Buchnevich are closing in on their returns after missing the last 18 and 22 games, respectively.

Buchnevich has already hit the ice in a non-contact jersey while Zibanejad is out of his walking boot and now skating on his own. The expectation is that both players will ramp up activity during the approaching bye week and return in mid-to-late January. And that can’t come soon enough for the floundering Blueshirts.

Zibanejad and Buchnevich bring creativity to the offense matched by few regulars. Zibanejad had a healthy 15 points in 19 games before getting hurt, while Buchnevich had scored in four straight games before hitting the shelf. To their credit, the Blueshirts have recently found ways to score more greasy goals, but the return of two of their best playmakers should help rejuvenate a sputtering unit.

It goes far beyond that, though. Zibanejad and Buchnevich were among the team leaders in possession-driving statistics when they went down and the gap between them and most of their peers looks even more significant coming out of this recent reality check.

The duo should also help immediately on the power play. Brandon Pirri must be checking in with Zibanejad hourly at this point, for Zibanejad had been serving up a delicious variety of passes across the slot for Pirri to one-time at will. Zibanejad earned helpers on three of Pirri’s power play goals, but Pirri has scored just once since Zibanejad’s departure. Buchnevich had also tallied three of his eight points on the man advantage and was earning more and more opportunities.

Zibanejad will also be a major help on the defensive side of things. Zibanejad quickly established himself as a huge upgrade over Derick Brassard in the D-zone and was leading the charge in a rediscovered commitment to team defense.

New York’s weaknesses remain apparent and continued success may be hard to come by until they’re addressed, but replacing these critical pieces into the broken machine may enable it to run just a little while longer.