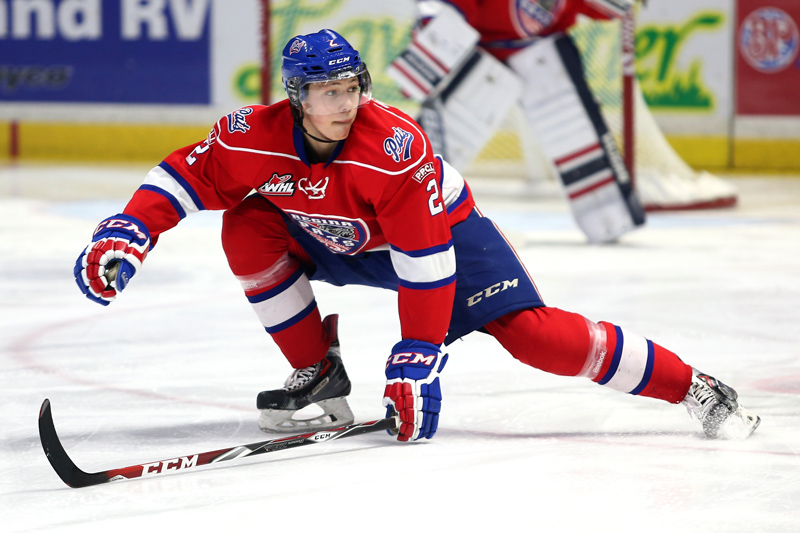 Confession: I just wanted to save this title for when it happens in the NHL.

One of the more interesting prospects for the Rangers this season has been Sergey Zborovskiy. When he was drafted he immediately became a somewhat polarizing player due to the Rangers taking him in the third round. While he was certainly shooting up the draft rankings, the Rangers’ definitely reached for him. Low and behold, last season Zborovskiy began to slowly add some more offense to his game. That is a natural progression that comes with being more comfortable in a new country and growing older.

Not all things were peachy last year though. While his point production and skating improved, he was still having difficulty breaking out of his own zone, costing him the spot on the Russian World Junior team. The Rangers still must’ve seen some potential and rewarded Zborovskiy’s improvement with an entry level contract. From the current look of things, he is beginning to reimburse the Rangers. So let’s break down the prospect that can potentially give the Rangers a nice defenseman with size.

If you look at the basic stat line, Zborovskiy’s season looks like an offensive revelation. In 28 games he already has 32 points, but we have to look at it deeper. While the production is nice, it cannot be overlooked that he is playing on arguably one of the better CHL teams this season. The Regina Pats’ offense is one of, if not the best in the entire WHL. To play Devil’s Advocate, you can ask “well, what if he is a product of his team”.

When it comes to Zborovskiy, Regina Pats GM/Coach John Paddock had this to say:

“For me, when he’s on his game, he’s one of the best defenders in our league because of his great reach and great hockey intelligence — knowing when to step up and kill plays early.”

This is some mighty praise from one of the more respected hockey minds in the game. It alsomade me interested in seeing how Zborovksiy’s GF% looks compared his team and the rest of the league. Zborovskiy leads all WHL defensemen in GF% with 77.14% (closer 10 100% is best) and has a GF% Relative to his team of 21.59%, meaning he’s on the ice for goals-for significantly more often than goals-against. It seems as though on top of his increased point production, Zborovskiy is also living up to Paddock’s praise at being a sturdy defensemen in his own end. The numbers are really promising and it would be best to see how his play has evolved this season that leads to these great numbers.

As mentioned above, Zborovksiy has significantly improved his skating. He still has to improve more to be a quality NHLer, but the fact that he is improving means that there is awareness. Improved skating has improved his defensive zone play, as Zborovksiy plays with more confidence and has been active with his long reach, shutting down many players by forcing them to the outside on the rush. The young Russian is also much more physical, which was always part of his game, as he draws players to the outside and then forces them into the boards. He has a good amount of room to improve with starting the breakout, both with passing and skating the puck out of the zone, but as skating gets better, this should get better as well.

The next step for Zborovskiy will be a strong performance at this year’s World Junior Championship. He is expected to have a major role on Russia’s defense, likely being the shutdown guy against better competition. His career path to the NHL might be very similar to the Ryan Graves path. He’s a project that shouldn’t be rushed, and like Graves he needs to learn how to use his body to the best of his abilities. A couple of years in the minors would be most preferred as well, as he would be playing against guys his size, as opposed to Juniors where’s he’s a monster.

In any case, Zborovskiy has been a revelation in the sense that he may be more than just a pure defensive defenseman. The Rangers have had to take chances in the mid-rounds to find potential sleeper talent, and Zborovskiy fits that bill nicely.