Rick Nash is a man on a mission 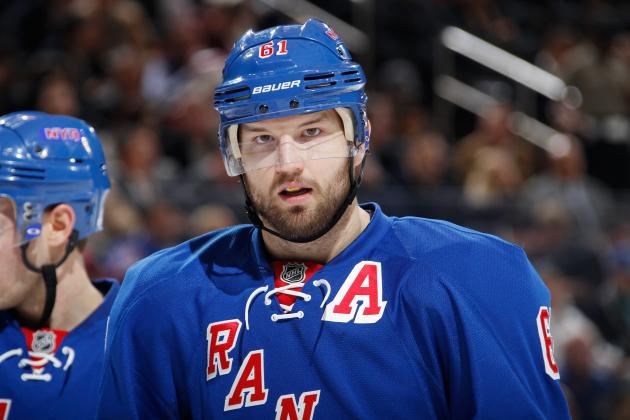 No Ranger forward is more polarizing year after year than Rick Nash. Opinions on Nash range from best 5v5 forward on the team to terrible and needs to be traded. It’s a little entertaining to see the back-and-forth regarding Nash, but it’s tough to argue that Nash hasn’t been one of the best forwards on the club this year.

Through 29 games, Nash has a line of 13-7-20, and is on pace for a 30-goal season. He’s tied with Michael Grabner for the team lead in goals, and is fourth on the team in points. He’s also tied for the team lead in PPG (4) and PPP (6). All this while missing four games due to injury.

It’s been fun to watch Nash, as he’s been explosive. It seems every time he touches the puck, something is going to happen. Just last night, there were three or four times where Nash just missed goals. He’s been an absolute force to be reckoned with. It’s almost as if he’s giving a giant middle finger to all the doubters.

For the Rangers to succeed this year, Nash was going to have to step up and be the go-to guy. He was going to have to be the guy Alain Vigneault pats on the shoulder when down a goal with less than a minute remaining. There haven’t been many opportunities like that yet, but he’s showing he will draw the attention of the defense, making life easier for his teammates.

His high cap hit will always make Nash a polarizing player among fans. Fans want perfection, and it’s tough to fault anyone for expecting a dominating performance on a nightly basis from the highest paid skater on the team. But while he may not be in the league-leaders in scoring, Nash is still giving that dominating performance on a nightly basis. There’s more to hockey than just points on the scoreboard, of which Nash is still up there.

Last year, the biggest criticism was that Nash wasn’t going to dirty areas. But this year, it seems every time Nash has the puck, he’s driving to the net, dropping the shoulder and trying to get a shot off. Or he’s in front fighting for a rebound. Or he’s using his body to shield the puck, drawing more defenders to him before dishing to a teammate.

Nash has been a dominating force for the Rangers on the ice this year, with no signs of slowing down. This is a very good sign for the Rangers, as they will need him to be that type of player when the games start counting in April and May. Nash is arguably the most important forward on the Rangers, seeing him play like this is critical to the success of this club.