The Rangers decided they only needed to play hockey for 20 minutes to beat the Carolina Hurricanes, and it wound up being true. The Rangers were outshot 25-11 in the first two periods, but still managed to escape tied heading into the third period. Then they actually decided to play hockey, scoring three times –also allowing one immediately after they scored– to take the 4-2 win.

This was not a good game by the Rangers, who played 20 minutes out of 60, but managed to eke out the win. Henrik Lundqvist kept them in it for the first two periods, which gave them the opportunity to come out with the win. After that, it was the Chris Kreider/Derek Stepan show. Stepan finished with a goal and two assists, and Kreider had a pair of goals in the third. 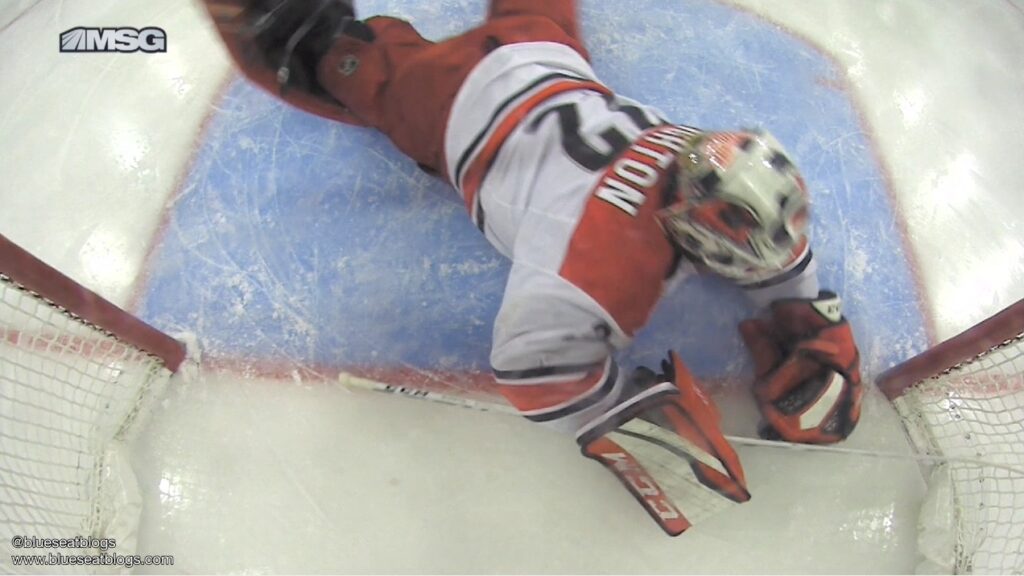 McDonagh committed a turnover with Viktor Stalberg harrassing him from behind. Stalberg forced the turnover, and the Canes quickly transitioned to a 3-on-1. Stalberg beat Hank glove side.

A solid breakout by the Rangers led to this goal. It started with Kevin Klein banking the puck around the boards to Michael Grabner, who backhanded it out of the zone to Jesper Fast. Fast made a nice cross ice pass to Brady Skjei, who hit a streaking Grabner down the slot for the breakaway goal.

Say it with me: “Stop trying to block point shots! Just let Hank make the save!”

The Rangers came to life a bit in the third, finally sustaining offensive pressure. It led directly to this goal, as the Rangers pressed hard. Dan Girardi’s point shot was stopped, and Stepan followed it up with a post. The puck slid under Leighton to the slot, where Chris Kreider banged it home. Justin Faulk lost his stick on the play, which is why he was out of position on the Stepan rebound chance.

Mats Zuccarello intercepted the Carolina face off win and started the rush with Kreider. Kreider’s shot went off the post, off Leighton, and in. 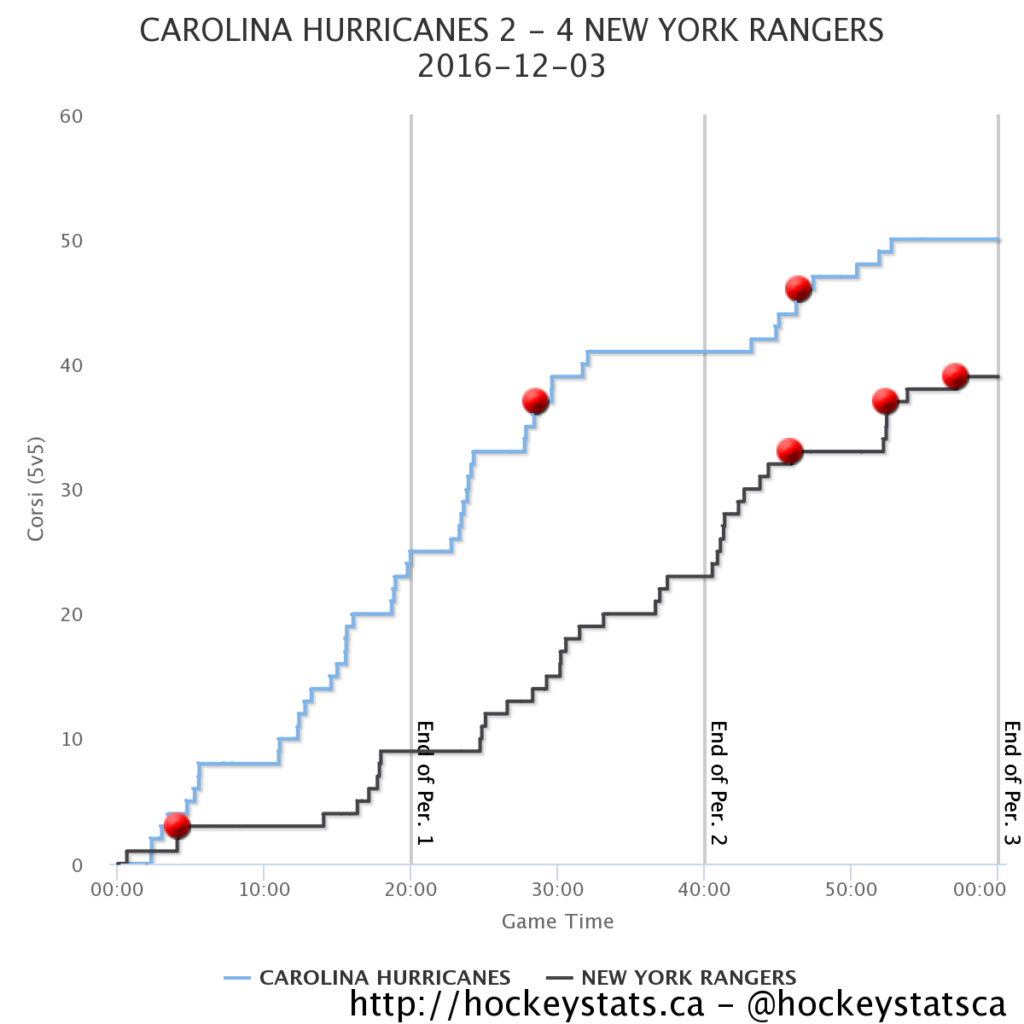 This was ugly for the first 40 minutes. It’s like the Rangers didn’t even want to play hockey. But then the third period happened, and the Rangers did a good job recovering and securing the win. 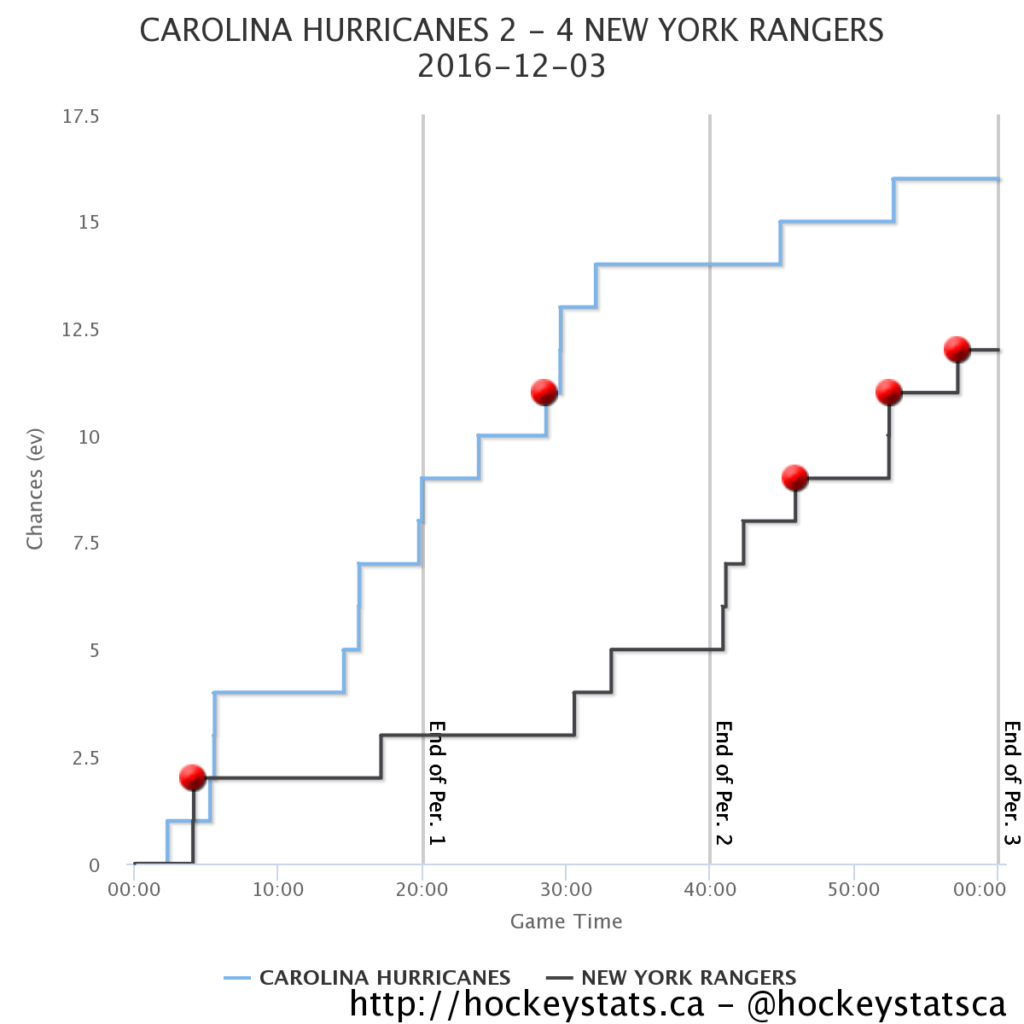 Scoring chances might have been even worse. The Rangers basically hung Hank out to dry, but Hank wouldn’t let them lose. The third was when they woke up, though.

A win is a win, sure, but this is not the way you want them to win games. However, if the third period is an indication that they are getting back on track, I’ll take it. The third is how you want them to play. Let’s see if they can do that for three periods next game.