Brady Skjei – everything we hoped for and more 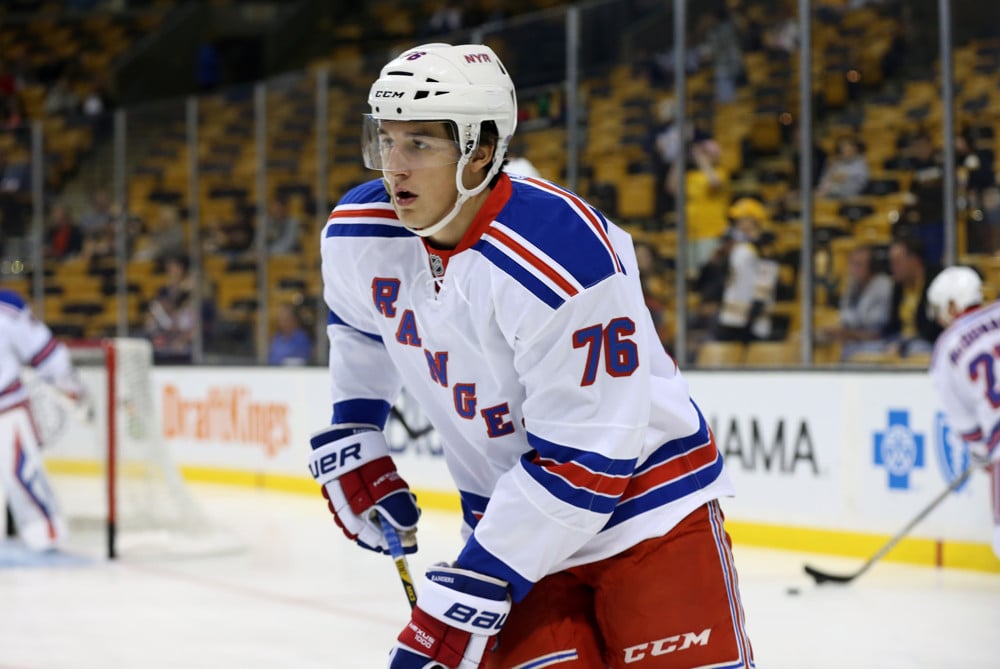 Skjei’s development has been critical to the Rangers long term future.

It’s fair to suggest that Brady Skjei – not Pavel Buchnevich, Jimmy Vesey, Chris Kreider or JT Miller – may be the most important draft pick and/or prospect the Rangers have developed in an entire generation.

With Dan Girardi and Marc Staal in decline (regardless of their respective bounce back seasons, they’re certainly not going to ‘improve’ from hereon in) and with only Ryan McDonagh a sure thing on the blueline moving forward, the Rangers absolutely needed Skjei to become a bonafide top four defenseman.

Not many people will have predicted this regular season coming out party from Skjei, particularly after his underwhelming preseason, but that fact is that Skjei has become an integral and surprisingly productive member of the Rangers and he’s helped solidify a blueline that faced a ton of question marks. His importance will surely only grow as he gains experience.

Skjei is putting up impressive numbers – he’s tied 22nd in the entire league in assists (9) and is 1st among all rookies – but its arguably the eye test and not any specific fancy stat that do Skjei’s play the most justice. Skjei plays a sensible brand of hockey in his own zone, he’s able to carry the puck up the ice and certainly uses his impressive skating ability to his advantage. However, not many will have expected Skjei to display the high level passing ability he’s displayed thus far.

Skjei has created numerous chances – not all rewarded on the scoresheet – with his passing ability and vision while he’s also happy to throw the puck on net where possible, so he’s not afraid to make the sensible, common sense play either. Skjei has shown an impressive ability to find the open man and is a very heads-up player, as evidenced by his assist on the pretty, pretty Michael Grabner goal against Tampa (check it out here) where he found Grabner wide open on the opposite side of the net following equally impressive play by Kevin Hayes who found Skjei deep in the Tampa zone.

Above all, Skjei seems to make the right decision more often than not – he’s got excellent hockey sense. Whether it’s a timely pinch to keep the puck in the zone, throwing a puck on net in traffic (which he has also done to create several goals) or whether it’s his passing ability, Skjei already looks much more than your standard rookie defenseman and he seems to be getting better every game while he’s also been impressively consistent.

Skjei isn’t playing huge minutes yet (he’s around the 16 mark/game) but it’s taken less than a month for him to be ‘promoted’ into the top four, he’s proving he can play both sides, and his play is giving Alain Vigneault more than one defensive pair he can trust.

Back to the importance of Skjei’s long term development for a moment. Let’s assume for a second that Jimmy Vesey never joined the Rangers as a free agent, that Kreider never put up back to back 20 goal seasons or Pavel Buchnevich never came over to America from Russia. Given the team’s depth, given how Jeff Gorton has found bargains in free agency, this team would probably be able to accommodate one or two less forwards of note. Moving forward, it may have simply meant an accelerated path to the NHL for a guy such as Boo Nieves for example.

So, what about Skjei? If Skjei doesn’t develop as he has done, the Rangers would have very little looming on the horizon for their blueline. With an aging defense it’s critical for the Rangers’ longer term intentions that they have been able to turn to, and rely on, a younger player such as Skjei to provide McDonagh with the support he needs from the blueline. They needed another smooth skating young defenseman to step up, particularly in light of Keith Yandle’s departure in the summer.

Maybe Ryan Graves develops into a viable NHL option and maybe John Gilmour becomes another college free agent find but neither player is a sure thing, far from it. Brady Skjei is a sure thing. A veteran in a rookie’s body and the definition of a modern NHL blueliner given his hockey IQ and skating ability, Skjei is fast becoming everything the Rangers hoped for – and more.