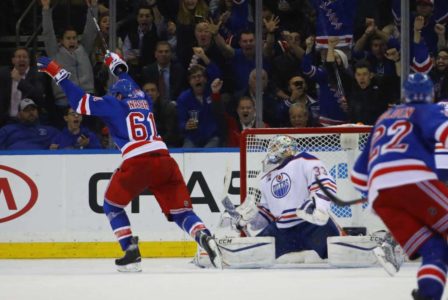 Last night, the Rangers collected their eight victory of the season over the red hot (?!) Edmonton Oilers. The Blueshirts spoiled Cam Talbot’s return to the Garden and scored five goals for the sixth time in eleven games this season, which is nuts. Any way, I have some thoughts.

1. There has been a lot of discussion about PDO when it comes to the Rangers performance thus far. It’s not like last year where unsustainably hot goaltending was masking other issues, but more of a discussion about high shooting percentage and low save percentage evening out. The Rangers would still be a very good team under this analysis, but just not the offensive powerhouse that they have been to this point.

However, I don’t think this analysis is as simple as “hot shooting, cold goaltending”, as many are framing. From a scouting standpoint, I don’t think Henrik Lundqvist’s performance is accurately reflected in his save percentage. If you take a look at the scoring chance charts that Dave has been including in the game recaps, there is a disproportionate amount of high dangers shots that Hank has faced. So maybe it’s not save percentage regression from a performance standpoint, but save percentage regression from “defense improves” standpoint. Hopefully.

2. It makes me very happy to see Rick Nash back in form. Obviously, when you carry a hefty cap hit and arrive in New York with dramatic fanfare, it creates high expectations. Nash is far too talented a hockey player to not produce again after a disappointing season, and gets far too much flak from fans considering how much he brings to the table for this team.

3. Nick Holden has looked better in recent games, but he still should be the one in the press box.

4. Dave, Chris, The Suit (yes, he is still alive) and myself were discussing the expansion draft the other day and the topic of Kevin Klein came up. My position was that Klein needed to be protected in the draft, and one of Staal or Girardi had to be sacrificed for this purpose. The feeling was that quality, relatively inexpensive, RHD that can play top-4 minutes, would be claimed in a heartbeat. I’m curious as to your thoughts.

5. Over the next nine games, the Rangers have three back-to-backs. This should give Antti Raanta an ample opportunity to get some starts and keep Hank rested. For the next fifteen games beyond that, they are basically every other day with two more back-to-backs. I know that AV likes to let Hank get on a roll and keep his reps consistent, but hopefully the structure of the schedule forces his hand and gets Raanta at least seven or eight games over that stretch.

6. Regardless of your opinion on AV’s decision to marginalize Zibenejad, Kreider and Vesey last night toward the end of the second period, it was nice to see him identify an in-game problem and make an adjustment. He has shown a track record of being stubborn with his personnel decisions (in-game, specifically) and this type of decision bodes well for future flexibility. Now, if he would only apply the same logic to the back end.

7. Kevin Hayes was a beast last night. The line with Miller and Grabner is really clicking, although I would like to see Buchnevich eventually swap in for Grabner.

8. This statement is not based on a single game worth of performance, but it the rumblings have been starting again in light of the Oilers’ hot start, so it’s worth spelling out again: Cam Talbot is not a better goaltender than Henrik Lundqvist. He never has been, and very likely, never will be.

9. While there is always quite a bit to analyze (and complain about!) in Rangerland, all is pretty good right now. The defense needs to be addressed and cutting down on some scoring chances against should hopefully help keep the forwards from having to score five goals per game, but the Rangers are a fun team to watch again. After a nice run of success at home, they need to look to build some consistency on the road. Hopefully we see this on the upcoming trip.

That’s it for me this week. Enjoy the weekend, everyone!