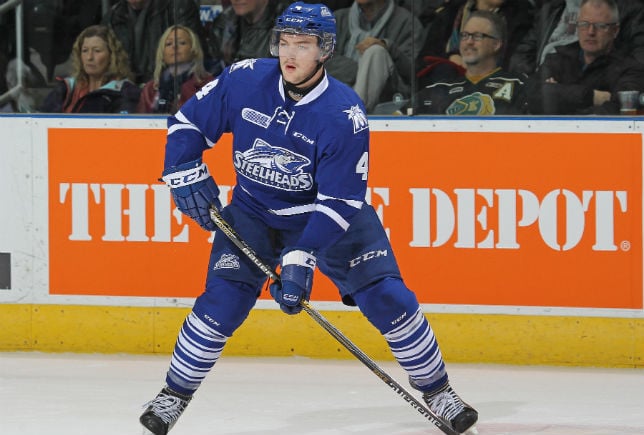 While we are all enjoying the new version of the Rangers, I am also keeping tabs on the Rangers prospects not playing in the AHL at the moment. Since I’m sure many of you have heard how dominant Igor Shesterkin has been in Russia in the KHL, it might be prudent to remember there are other prospects in the system

Tyler Nanne – Nanne is a series of unfortunate events. While he was a good risk to take as a dynamic right handed defenseman, Nanne had a dangerous heart condition that kept him out of playing in the NCAA last year. With this, he decided to transfer from Ohio State to the University of Minnesota. NCAA rules stipulate he must sit out this season as well, though. Sitting out two years is not good news for any player. I think this is it for him and he won’t be signed by Rangers.

Tyler Wall – Other than his name making him a sure fire NHL All Star goalie, Wall has both surprised and impressed everyone involved with his early play for the UMass-Lowell Riverhawks. Wall dominated in the GOJHL last season and that led the Rangers to take a chance on him as he was committed to playing in the NCAA this year. Normally, young guys like Wall don’t play a lot as freshmen but Wall has forced the hand of the coaching staff. Tyler Wall had his first shutout on October 15th and since then has been named Hockey East Defensive Player of the Week.

Adam Huska- Another freshman goalie prospect for the Rangers, Huska plays for UConn and due to their crowded crease has only played one game. That game however was absolutely stellar – a 36 save performance in a 1-1 tie. Huska looked great last January in front of a bad Slovakia team for the World Juniors, and I believe he is still in the age range to be part of the tournament again this year. Goaltending has become a major position of strength for the Rangers.

Brad Morrison –  Morrison is one of my favorite players, I’ve been raving about him since before the Rangers drafted him. He has all of the offensive tools to be a dangerous player. This is likely his last CHL season and hasn’t disappointed so far with 14 points in 11 games. The only issue with Morrison is that he still plays “junior” hockey. He needs to be stronger on the puck and use his teammates instead of dangling through people all game. At the current moment Morrison is out with an injury after being hurt by Rangers camp invite Turner Ottenbreit. It was a clean hit, Morrison needs to learn how to keep his head up.

Sergey Zborovskiy –  The big right handed Russian was always seen as a project pick, and although he is definitely a reach he seems to be progressing nicely. He knows how to use his reach to his advantage and does play with a bit of a mean streak. The club liked the trajectory of Zborovskiy so much that he signed an ELC. Zboro hasn’t disappointed the Rangers this season as he is starting to add more offense to his game and moves the puck better. He has six points in seven games thus far.

Ty Ronning – The speedy agitating forward is a fan favorite in the making. Words cannot describe how happy I am that the Rangers took a chance on him in the 7th round. Ronning is starting where he left off last season as he is scoring at a torrid pace, with nine points in nine games while being an absolute animal on the forecheck.

Gabriel Fontaine – Fontaine was brought in because of how responsible he looked while centering the champion QMJHL Rouyn-Noranda Huskies team. Fontaine is known to be one of the most intelligent and hard working centers in the Q. Also, a recent study during the RITHAC has shown that drafting overage guys like Fontaine has some value, as they do tend to be quality bottom-six guys if they make the leap to the NHL. The Rangers are likely hoping for that as Fontaine is could be an ideal 4C. Fontaine has also grown his offensive game to go along with his great defensive play. Becoming a “jack of all trades” for the Huskies bodes well for the Rangers.

Tim Gettinger – Gettinger has started off slow to begin the season with only four points in eight games. Normally I’d be worried, but I do believe this is the Kreider syndrome. A big guy trying to do too much to help his team while not playing his game. The Soo Greyhounds still have some kids on NHL rosters (NJD prospect Blake Speers), though. Once things settle down I think Gettinger will benefit from having a set role on his team, allowing him to both use his body and skills to get things going.

Sean Day – Day is showing the Rangers some promise since he was sent back to the OHL. He is putting up a point per game while looking more active in the offensive zone. I haven’t watched any Mississauga Steelhead games, but a friend of mine says he does seem to slowly be turning the corner and improving his all around game with better decisions.

Tarmo Reunanen – I can’t watch Mestis games so I have nothing valuable to say here guys Im really sorry but it does look like he is the go to guy on his team.