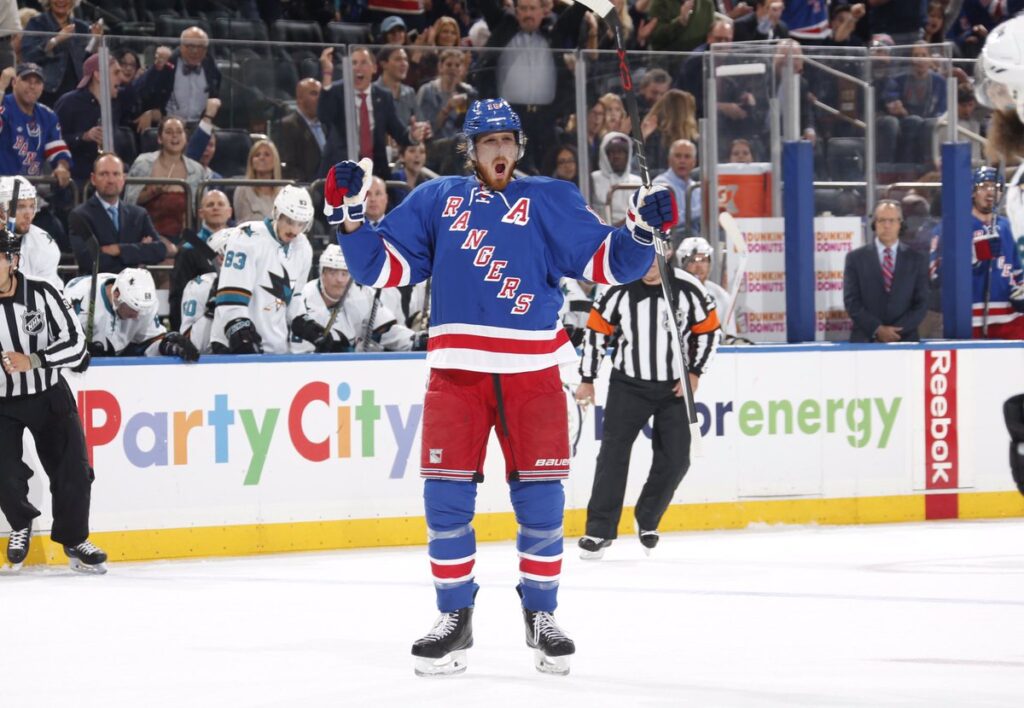 The Rangers put up a touchdown on the San Jose Sharks last night, barely holding on for a 7-4 win. It sounds weird to say they held on for a win by three, but they did allow the Sharks to get to within a goal –after being up by three– before scoring two empty netters. Chris Kreider led the Rangers with another multi-point game as seven different Rangers scored in the win.

The one troubling aspect here is that the defense again gave up a ton of goals, including three in the third period. This was a much closer game than it needed to be. There weren’t any weak goals by Antti Raanta, it was just allowing too much room for the Sharks to maneuver. As an elite NHL team, San Jose makes you pay. But the Rangers made them pay more.

This was a great overall shift. Jimmy Vesey and Derek Stepan got in low on the forecheck to force the turnover and maintain possession. Stepan found Marc Staal at the high slot who one-timed it by Martin Jones. Staal did a good job of finding the open ice and calling for the puck on this play. Vesey and Mats Zuccarello with the screens in front too.

With the Rangers down two men, Brent Burns basically dry humped Rick Nash after he had a shorthanded chance. Nash broke his stick, and then it was a quick goal on the ensuing 4-on-2 rush the other way. Logan Couture had the easy tap-in from Joe Pavelski.

Good shift all around by the Rangers. This started with Adam Clendening feeding Nash for the zone entry. Chris Kreider worked low to maintain possession and got it to Ryan McDonagh at the point. He purposefully shot it wide, and Nash was there to bang the carom home. Credit Mika Zibanejad for going to the front as well, dividing attention low.

Kreider is white-hot right now. McDonagh sprung him down the wing on the “Kreider pass,” and he just roofed it over Jones. This is one Jones wants back though.

The Ranger failed to clear the zone after winning the faceoff, and never recovered. No one picked up Brent Burns, who took the Pavelski feed at the high slot and roofed it.

McDonagh made a perfect pass from the defensive zone to J.T. Miller at the blue line, who tipped it to Kevin Hayes, who got it across to Jesper Fast. Fast skated in as Hayes went to the back door, and delivered a perfect pass for the easy goal.

Mats Zuccarello forced the Sharks into a turnover, then got the puck to Derek Stepan. Jimmy Vesey got to the front of the net for the easy tap-in. Vesey’s first career goal. The first of many.

The Sharks gained the zone, and it led to Pavelski getting the puck to Burns, who ripped it by Raanta. What a shot.

Pavelski and Burns had great nights, didn’t they? This time, the defense forgot to pick up Pavelski in the slot, who was left free to tip the Burns shot by Raanta.

A note about the charts below: I’m moving more towards scoring chances and away from Corsi. Need to account for quality as well. 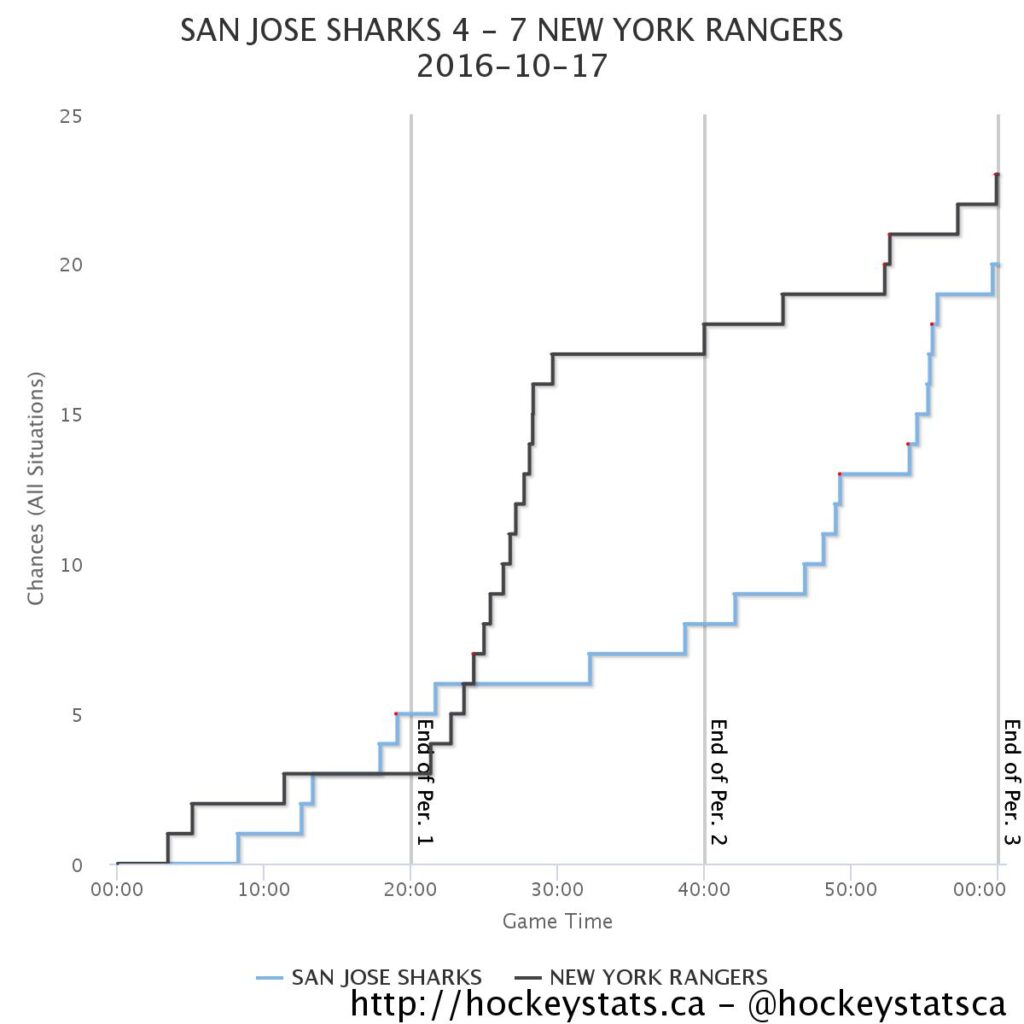 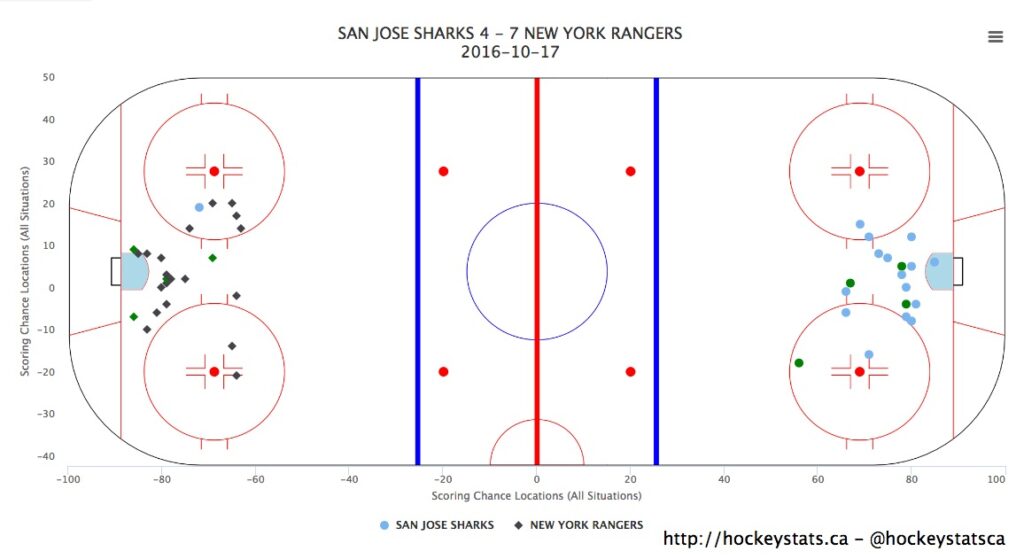 As long as the offense continues to outscore their porous defense, the Rangers will win a lot of games. They generate and score a ton, but boy do they allow a lot too.