The Rangers started off the season on the right foot, as their offense shined in a 5-3 win over the Islanders. Jaroslav Halak kept this game interesting in the first period, as he was very sharp and basically kept the Isles in it. But it wasn’t enough, as the Rangers put up a five-spot on him by the time the night was through.

As expected, the defense still remains a concern for the Blueshirts. There were some pretty terrible breakdowns, some of which led to goals. If this team is going to hang Henrik Lundqvist out to dry all season, then they are going to need to score five per game to win. But a win is a win in the first game of the year. Lessons are learned. They adjust. They move on.

The Rangers continue to be a good transition team, when they are able to transition. This started with a good play in the defensive zone –which involved John Tavares tripping over his own teammate– followed by a quick transition to a 4-on-2 rush. Jesper Fast got the puck to Brandon Pirri, who fired his shot from the top of the circle. Nick Leddy was caught deciding between Fast and Michael Grabner, as the former stayed high and the latter crashed the net. A big rebound made the goal easy for Grabner, his first as a Ranger.

This was a great zone entry by Mika Zibanejad, who got the puck deep with a nifty move through his legs. He then got the puck up to the point to Brady Skjei. Skjei kept his head up the whole way and found Mats Zuccarello in the slot. His backhanded went off a skate and through Halak. DJ ZBad’s first point as a Ranger too.

The Rangers turned the puck over in the offensive zone, and then Chris Kreider and Pavel Buchnevich appeared to stop skating at the red line. The Isles moved the puck well, and Casey Cizikas hit Nick Leddy as the fourth man in. Marc Staal led with his skates instead of his stick while trying to block the shot. That failed, and Leddy beat Hank stick side.

Yea, I know Buchnevich had a bad pass in the offensive zone that started the rush. But this is bad defense by Dan Girardi. Why would he leave that passing lane wide open?

Buchnevich fired a cross-ice pass that Kreider gloved down for the breakaway goal. Simple. Effective. Win. Nick Holden’s first point as a Ranger too.

A powerplay goal to kick things off. This was just a beautiful pass by Kreider to Brandon Pirri. His first as a Ranger.

The Isles scored on the rush again. This was the product of poor neutral zone defense and back checking. Brock Nelson with the goal. A bunch of folks blamed Holden for this, but that’s a tough spot for him. He had a guy cutting in front that he had to stay with, and expected a better back check from his teammates. It’s an overall team fail, not just on Holden.

Quick note on the below charts: Used to get these from war-on-ice.com. Most of the people who ran the site have been hired by NHL teams by now. So the new charts are from hockeystats.ca. Not as many or in as much detail. 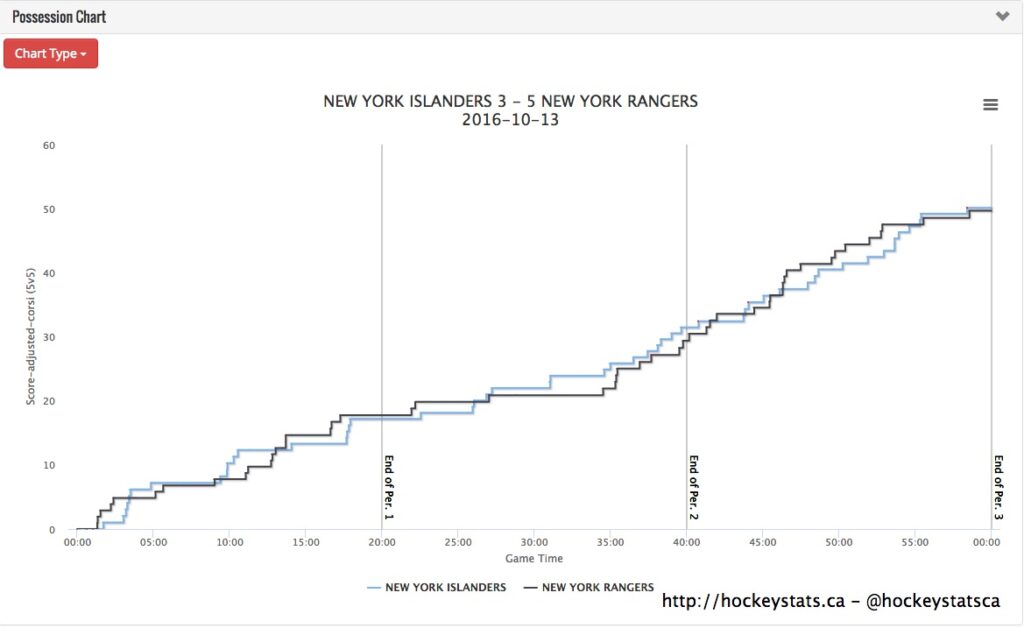 This was a pretty close possession battle throughout. The Rangers have more forward skill though, and it showed. It’s just one game, and I don’t read too much into single game charts like this. My recommendation is to look at it and try and notice trends over time across multiple games. 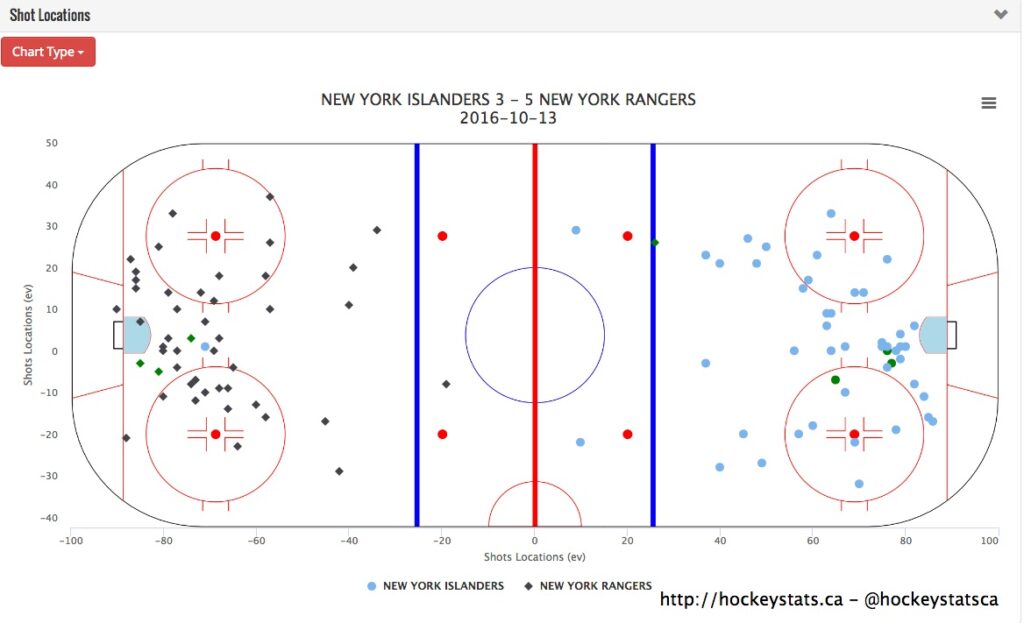 The Rangers managed to get a lot of shots from high priced real estate in the slot. They gave up a ton too, but that is expected. This is the new norm for the Rangers, even if it’s just one game. Keep an eye on this, as I’m guessing they will get a ton of shots in close, but give them up as well.

That’s one game in the books, with 81 left to go. It wasn’t pretty, it wasn’t perfect, but it was a win. Let’s see how the kinks work out over the coming weeks.