Thoughts on the Traverse City Roster 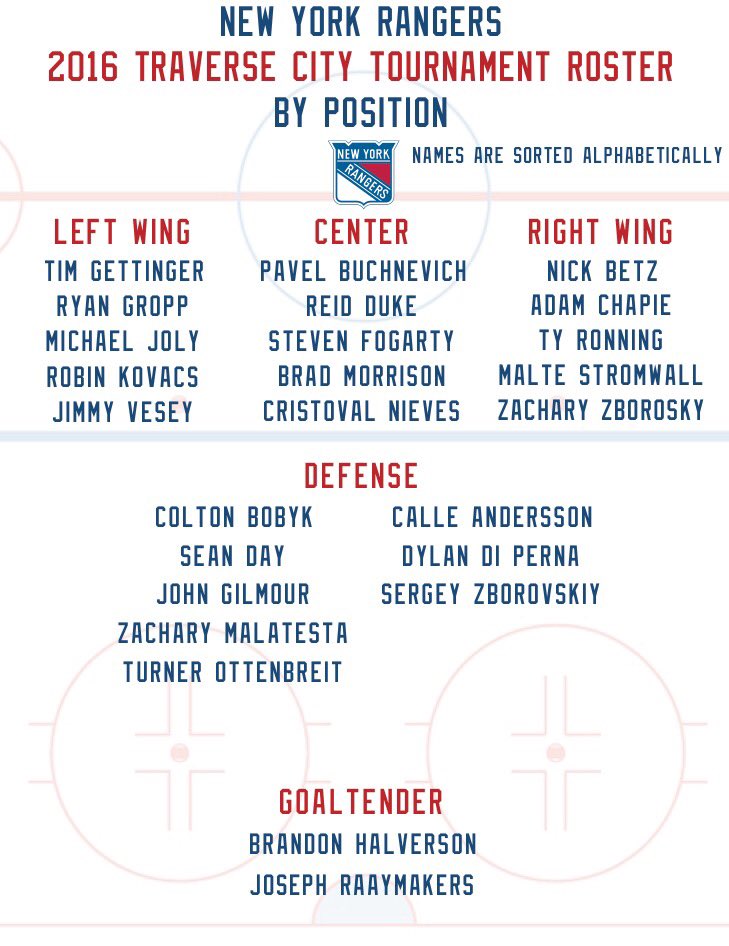 The New York Rangers recently announced their Traverse City roster and invites, and while the names don’t include players from my previous post there are some interesting names. There are three non-organizational forwards invited to the camp; Reid Duke, Nick Betz, and Zack Zborosky. On defense we have Colton Bobyk, Zachary Malatesta, Turner Ottenbreit, and Dylan Di Perna as the non-roster invites. Let’s look at these invitees.

Reid Duke – The versatile right handed center and winger is the only center the Rangers invited this fall and he provides this team with some intriguing depth. He plays an all around two way game focused on speed and being responsible in his own end. The teams he has been on use him in a defensive role for this very reason, yet he does show some flashes of skill. The issue with Duke is that his offense isn’t exactly consistent nor is it impressive as a 20 year old in the WHL. Duke was lost in the numbers as he went unsigned by the Minnesota Wild, but in any case should provide some forward and penalty kill depth to the roster as he tries to get his name on a possible AHL contract.

Nick Betz – This is one of the odder invites to me. Nick Betz is a massive right-handed power forward who has thus far spent his entire OHL career in Erie. Now at 21, Betz hasn’t been able to be an offensive force even while being more physically mature than 95% of his opponents. That just doesn’t bode well with me.

That said this is more than your average Traverse City fodder like Duke may be. While Duke has another year of eligibility in Juniors, Betz does not. Both sides are likely looking for a good camp to see if Betz can continue his hockey career as a pro, likely with the ECHL’s Greenville Swamp Rabbits. Betz isn’t a fast skater and I wouldn’t really call him a “good skater for his size.” He does play a strong net front game –is that attributed to his size, compared to the 17 year olds he is against?– and a powerful shot. In any case, I would not be shocked for him to get an AHL deal, but an ELC is questionable.

Zach Zborosky – This is the most intriguing forward invite and likely has the best chance to becoming a noted prospect. Zborosky was a bit of a late bloomer, but the right handed sniper has not only gotten better every season with the Kootenay Ice, he has taken up a leadership role as well. Zborosky is a prospect that I really think fits what the Rangers are trying to build. A right-handed, fast skating player with offensive abilities will certainly pique some interest.

Colton Bobyk – Bobyk is a strange defenseman. The 6’1″ left handed Red Deer Rebel exploded last season to the tune of 20-27-47. Bobyk’s howitzer of a shot helped him amass those totals. The interesting thing here is that Bobyk only started playing defense just before entering the WHL. Is it possible that he took a couple of years to adjust, and now with some experience and being an older player he was able to breakout?

Zachary Malatesta – Malatesta is your prototypical 5’9″ puck moving defenseman. He makes his name by beginning the breakout with a sleek first pass out of the zone. He still has to work on his strength along the boards, though. I am also quite wary of the fact that he hasn’t piled up the points in the QMJHL, and for a small defenseman to gain any kind of recognition the points need to come.

Turner Ottenbreit – Ottenbreit is a 6’3″ defensive defenseman that uses his body and physicality to separate forwards from the puck. My issue is he isn’t that impressive of a skater and I wonder if the Rangers would even bat an eye if he was smaller. To me he just isn’t that impressive, but the club has seen quite a bit of him while scouting teammate Ryan Gropp. I wouldn’t be surprised if he becomes the next Troy Donnay within the organization and somehow getting a deal next year.

Dylan Di Perna – Di Perna is the only right handed defenseman that the Rangers invited, and after two injury plagued seasons he finally seemed to get his footing with the Kitchener Rangers last season. Di Perna does have a hard slap shot and the Rangers likely hope that he will provide a better offensive showing without any injuries hindering him in his over age year.

Side note: I believe Ahti Oksanen is still injured and that is why he will not attend. In any case Hail Zuccarello.

Joseph Raaymakers – I won’t comment much on Raaymakers as I don’t do goalies, but he did give Halverson quite a run as his backup, so having him in Traverse City is fun.

Line combos get interesting, especially if Pavel Buchnevich will be playing center for the tournament. Below are my ideal lines, but worth noting that these aren’t lines 1-4, these are just some trios I am interested in seeing.

Ottenbreit is someone that I can see filling in for Bobyk in games because of a similar defensive style. I am confused about where I’d place Malatesta, though. He can likely fill in for Gilmour if the team doesn’t need to see much more of him.

Overall I am a little upset about the invites, as I was hoping for more players with character issues that have underlying talent, or players simply passed over because of size. The Rangers wouldn’t lose much inviting these players, as they wouldn’t cost any contracts. That said, it really doesn’t matter at all because this tournament is just to get to see some prospects, with most invites not resulting in much. I am just excited to start watching some hockey. Hopefully this will be televised this year.