In case you missed it, the Rangers signed another forward this week, inking Brandon Pirri to a one-year deal.  The signing is a nice pickup, and another indication that this front office knows what it’s doing. Still, this now leads to a glut of forwards all fighting for roster spots, and it’s hard to say exactly where he might fit in. So let’s get to some thoughts heading into this season with this logjam at forward.

-Ideally Vesey and Buchnevich would be getting sheltered starts on the third line, which would then bump Pirri down to the fourth line. That’s all fine and good except that Pirri’s strength is shot generation and not much else – his shot suppression numbers are pretty bad, and for comparison I’ve included Kevin Hayes’ HERO chart as well (i.e. if you think Hayes is defensively irresponsible, get a load of Pirri). This leads to the question of where to put Pirri, and on that question I really have no idea. 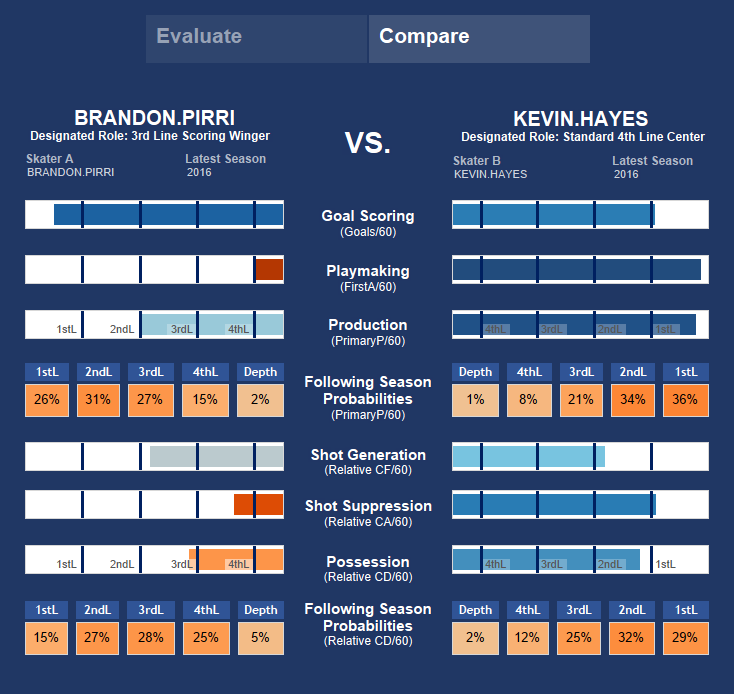 – As I mentioned in the last point, ideally Vesey and Buchnevich would be getting time on the third line. I say this because while they’re both skilled players with high upside, they are rookies, and so sheltered starts would be best for them. Plus, watching the two of them with Kevin Hayes as their center would be a sight to behold.

– I mention them also because it’s worth noting that although there’s some serious competition for roster spots, it shouldn’t include Buchnevich and Vesey. This isn’t just because I’m high on both of them (even though I am) but because it’s hard to imagine the Rangers landing Vesey without a promise of serious playing time, so an AHL stint is doubtful (and if it does happen, expect it to be short, as he is very likely NHL capable aleady). Along similar lines, putting Buchnevich in the AHL runs the risk of him going back to Russia, so I highly doubt they’d do something like send him down. All of this means a significant logjam, which brings me to my next point…

– We may be on the verge of a fairly significant trade. This is all pure speculation on my part, but I’ve got to believe that with the amount of forwards on the Rangers roster at the moment one or more forwards is on the way out in exchange for some help on defense, which is the obvious need. Whether it’s a blockbuster involving Rick Nash or Zuc (I sure hope not) or a package centered on someone like Jesper Fast or Oscar Lindberg (the latter being unlikely due to his injured status) I have no idea, but I would not be surprised to see some forwards leave at some point.

– The big question is when. One would imagine the summer being the time to make something happen, but given the management’s comments about Dan Girardi and Marc Staal I would not be shocked if they’re banking on one or both of them having a slight rebound before packing them with someone as part of a deal for a defenseman. Ideally, the two of them play better than last year and then the market for either of them opens up a little bit more and one or both of them is out of here. My other crazy conspiracy theory is that the Rangers are waiting until the trade deadline when the market is wild and crazy, flipping a bunch of those forwards, and then buying out one of Girardi or Staal before the expansion draft. This is kind of out there, and leaves some questions about the Rangers’ status as a contender this season, so I doubt it happens – I’d imagine that a trade happens either this summer or early in the season. My crazy pipe dream hope is that there’s a deal to be made for Hampus Lindholm, but that’s also probably pretty farfetched.

– Lastly, a comment on this forward corps and what its assembly says about management. This is the youngest and fastest the Rangers have been up front in quite some time, with Zibanejad, Vesey, and Pirri all adding some nice skill to the already solid mix of guys like Kevin Hayes, Chris Kreider, and JT Miller. All of this says to me that Jeff Gorton has his head on straight and understands that this league is moving more and more towards speed and skill. Whether this means they’re analytical inclined I have no idea, but there’s a slightly more than vague sense I get of the FO being tuned in to what it takes to win in this league. Along those lines, I’m of the belief that Gorton and his compatriots understand that Dan Girardi and Marc Staal are relics of the past, and that this defensive corps needs an upgrade. What lengths they’ll go to in improving the blueline I’m not sure, but at this point in the summer I have faith in management.