What is going to go down with the power play?

Last week I talked about how the Rangers’ off season signings can possibly fit as penalty killers. When we look at how GM Jeff Gorton did over the summer, it is easy to be happy that he did do his best in improving the penalty kill. That said, as happy as I am with the steps taken, I am not keen on automatically giving Gorton a pass for Dan Girardi and Marc Staal, as he was likely a big player in the re-signing of them.

We talked about these players a lot and I think we saw one of the most negative effects of having their contracts on the payroll when Keith Yandle was traded. You can hate Yandle because he is not in the realm of Kris Letang or Erik Karlsson. You can hate Yandle because you automatically equate him as the reason the Rangers lost Anthony Duclair. But his ability to move pucks out not only at even strength but also be a valuable player on the power play will be missed. Add a retiring Dan Boyle to the fold, and you just opened up two holes on the back end for both even strength play as well as power play.

Quick note: If you expect Brady Skjei to just come right along and become like Ryan McDonagh by January, you’re setting yourself up for disappointment.

In any regard losing Yandle, Boyle ,and Derick Brassard really does turn the powerplay upside down opening new opportunities for the players. 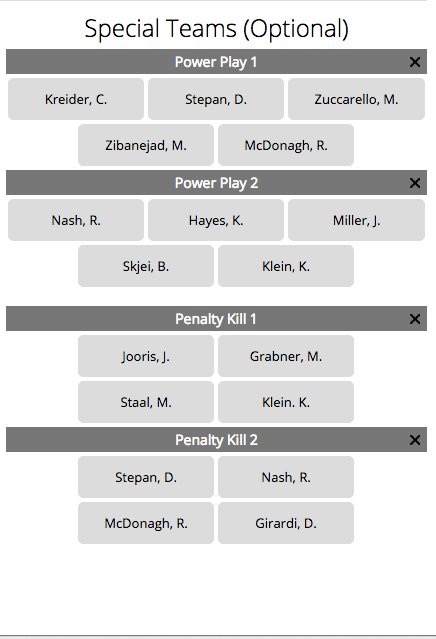 Mika Zibanejad – Zibanead will be given literally every chance to prove that the Rangers were the clear cut winners in a trade that involved a fan favorite. One of the things that the Rangers have been lacking since Sergei Zubov is a right handed shot from the point that can actually do something productive on the power play. Zibanejad has a pretty powerful one timer, so I think it will only be natural to pair him with Ryan McDonagh on the PP on that first unit allowing him to unleash the shot in the “Ovi area”.

Zibanejad’s shot is a little wily and I’ve read that he has been asked to take some oomph off of it so it can be a little more accurate. I think we have the potential to see a pretty dangerous player finally possessing a right handed shot from the point on the power play. His ability to also play a strong two way game can also help relax people afraid of having a forward back there in case of a shorthanded opportunity.

Since defensive depth is lacking for the 2nd unit (I’ll get to that shortly), splitting talented playmakers like Kevin Hayes and Mats Zuccarello so one of them can help set up Zibanejad’s shot can increase effectiveness, as you don’t want half the power play to go to waste because you can’t set anything up.

Finally, the threat from the off-wing likely means teams need to respect it, opening up other options. Zibanejad has great vision and passing ability, which will help the Rangers capitalize on those options. Having a complete player with a dangerous shot from the point truly opens up many opportunities to not want to gauge your eyes out during a power play.

I think the forward units on the powerplay, while not stagnant, are fairly good. The depth that the Ranges possess at forward allow them to likely mix and match a few players until something is working, but where the issue arises is now that second defense pair.

Brady Skjei – It should be believed that either Skjei gets some power play time or McDonagh just plays the full 2 minutes, as Staal is not an option for the powerplay. The bright side is that Skjei’s skating is wonderful and can probably be a great option to help carry the puck into the offensive zone. This is pretty sweet considering the Rangers really had a lot of difficulty entering the zone after the puck got cleared. Some of it is on the coaching staff, but providing the proper personnel does help. Skjei could be a good option in that regard. Unfortunately, Skjei doesn’t necessarily have the history of being a point producer, but perhaps giving him this opportunity can change that. In any regard, at this point Skjei will likely be given a PP opportunity but I am unsure to what regard he will produce points.

Kevin Klein – This is where things start getting interesting (read: Painful). As much as I like Klein, as of now he seems to be the main option on the power play because of his heavy shot. Unfortunately I don’t think it will work out well and the Rangers have been resilient to have tried him there when given the opportunity.

Dylan Mcilrath – This is interesting in the sense that if he can get playing time I think he should definitely be an option. McIlrath does have a big shot from the point, and if there is any way to start getting a player to show his value to the organization it is getting him more ice time in different situations. The special teams are no different, it would be sweet for a young guy like Mcilrath to prove that he can help the organization and stay in it.

While it does have potential to work for now and the future, the issue with Mcilrath is his lateral mobility may be tough to keep pucks in the offensive zone, something that we became accustomed to with Yandle. It’s worth noting that Mcilrath is essentially a year behind developmentally due to that knee injury a while ago, so maybe now with the long summer and essentially having an NHL spot can bode well for his offseason workouts. If he does make the team and is tried on the PP I think McIlrath would be on the right point picking pucks off the boards if they’re getting wrapped around so he wouldn’t have as much trouble with his skating.

Pavel Buchnevich – Totally possible that the Rangers will give Buchnevich a shot at some point during the NHL season. This would require slotting another forward to the point. He would be sweet along the side boards and he can be valuable by pursuing pucks and shielding them to keep the possession in the OZ.

Adam Clendening –  This is a bit of a wild card. Clendening in my opinion will be in the NHL this season. It was quietly mentioned last year that Alain Vigneault does like to carry eight defensemen if the money lets him and it does look like the cap space will be there. Clendening is an offensive defenseman who has the history to produce at least in the AHL. While he has been on many teams over the last few years Clendening is still pretty young, and it would be interesting to see if the once highly touted prospect can put it all together with his home town team if given the chance. On the power play he would be a good puck carrier and does have a fast shot, so being one of the trigger-men on an umbrella formation power play can be in the cards.