It was a disappointing end to the season to say the least, with the shock of Rangers’ blowout loss to Pittsburgh away matched only by their previous two efforts at home. The game was microcosmic of the season – flashes of pomising play at the beginning, with defensive breakdowns and endemic failure getting worse over time. This loss was the kind of game where you wished for a mercy rule, not only for our sake, but for Henrik Lundqvist’s, who despite being the best Ranger of the past decade is sure to receive some of the blame for the Rangers’ early playoff exit this year.

This playoff series against the Penguins was troubling but unsurprising for many fans who had seen underlying issues with the team papered over by stellar goaltending all season. It was the kind of series that makes you worry that the window is just about closed, and it makes this offseason that much more critical for Jeff Gorton.

The Rangers open the scoring with a deflected goal by Rick Nash. Brassard moves the puck up from the goal line to Skjei at the point, who then passes it over to Girardi along the blueline. Girardi takes a big shot, which Nash then redirects past Murray.

Hagelin knots the game at one off a slick feed from Phil Kessel. Hagelin skates with the puck behind the net into the corner, then passes it to Phil at the opposite corner. Hagelin then goes to the net, receiving Kessel’s pass and tipping it into the net. A well-executed give-and-go ties the game at one goal apiece.

Hagelin ties the game at 1 pic.twitter.com/vGfyGl7Xga

Dominic Moore puts the Rangers back up just a moment later with a weird goal, to say the least. Fast passes it to Moore as the two of them and Stalberg are skating through the neutral zone into the Penguins end. Moore then flings it laterally back to Fast, who puts it on net. The puck then goes through Murray’s legs, hits the post, into Hornqvist, then Moore, then into the net.

Not a lot to say on this one other than that it was Phil Kessel doing what he does best. Crosby makes a nice pass to Kessel as the latter is entering the zone on the power play. Kessel then rips a wrister, which hits the knob of Henrik’s stick and flies into the top left corner of the net.

Kessel ties the game at 2 pic.twitter.com/au62P6Sp2s

Bryan Rust puts the Penguins up on a play where the Penguins simply picked apart the Rangers defense. Matt Cullen moves the puck from down low up to Trevor Daley at the point, with Daley then faking the shot and passing it to Rust right in front of the net. Rust has a wide open net here and finishes with ease.

Rust puts the Pens up 3-2. What is defense. pic.twitter.com/Q1MrEjR9RC

Kuhnhackl flips the puck down ice towards the Rangers end with Bryan Rust and Derick Brassard after it. Rust ties up Brassard and loses the puck, but has Matt Cullen right behind him to pick it up. Cullen takes the shot and this game is 4-2.

A simple, effective play from the Penguins puts them up further, Crosby breaks into the Rangers’ zone down the wing, pulls up, finds Sheary in the middle and passes it to him. Sheary takes a quick shot and now the Rangers are trailing by 3. Not a great look for the Rangers defense leaving Sheary so much space down the middle of the ice.

Malkin and Rust play this two-on-one perfectly to put the Penguins up by 4. Malkin’s comes down the wing with Skjei between him and Rust, with Girardi attempting to backcheck but doing so ineffectively. Malkin gets Skjei to commit, passes it across to Rust, and this game just gets worse for the Rangers.

The Rangers get back on the board in the third period, but it’s too little too late. The puck bounces around down low on the Rangers power play, collected eventually by Derick Brassard. Brass works it back to Diaz on the point, who then takes a quick shot tipped in front by Chris Kreider for the Rangers third goal of the afternoon. 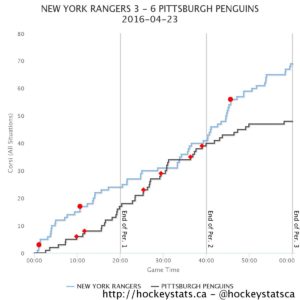 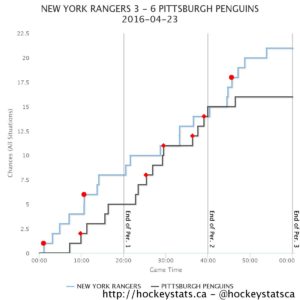 While these two charts indicate that the Rangers had their fair share of puck possession they should be taken with a grain of salt. First, the Rangers did notably come out swinging in the first period so that skews the numbers a little bit and put them ahead. Second, they really hit the gas in the third playing from behind, with the Penguins turtling being a prime example of scoring effects. Third, neither of these charts describes just how bad they played without the puck, which is why we always do goal breakdowns to fill out our analysis. The Rangers’ defense was unbelievably bad without the puck, and the scoreline shows it. 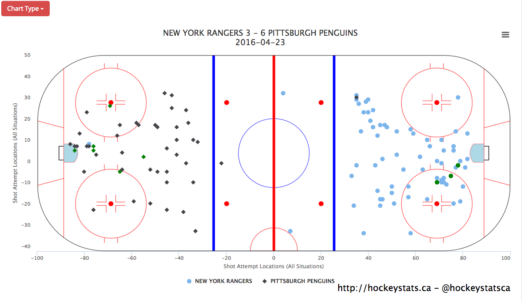 Again, this chart should be taken with a grain of salt, because while the Rangers did get a decent amount of shots, and some of them were in that critical “home plate” area, this doesn’t quite get to how bad the Rangers played without the puck.

All in all it was a tough loss, but the way this team played this series it’s hard for me to say they deserved to win. The hardest part of it all was watching this team fall apart in front of Henrik Lundqvist, who deserves none of the blame he’ll inevitably heap on himself. With some critical contracts expiring this summer, and some tough ones to move still on the books, this Jeff Gorton certainly has his work cut out for him this offseason.

It should be interesting to see how things play out, and I’m cautiously optimistic that the right adjustments can be made to keep this team contending through the rest of Lundqvist’s career and hopefully win him the Cup he deserves. Lastly, I just wanted to say thank you to everyone for reading and commenting, given that this was my first season writing about the Rangers here at Blue Seat Blogs. It means a lot that you guys are so passionate about this hockey team, and I hope I can continue to give you guys better and better content. We’ll have some more stuff up of course, but this is the last goal breakdown of this season, so until next time.