The Rangers got off to a great start in Pittsburgh last night, throwing everything they could at backup goalie Jeff Zatkoff. Not only were they unable to solve the third stringer, they gave up late goals in both the first and second periods. They scored a powerplay goal in the third, but immediately coughed up a shorty a minute late to nullify it. They then allowed another in the third (the third with Staal/Girardi on the ice).

Even worse than the lost game is the loss of Henrik Lundqvist. Hank took a stick to the eye from Marc Staal, an exceedingly rare case where his stick went through the cat-eye and actually got his eye. Lundqvist was writing on the ice in pain, reminiscent of when Staal was on the ice after taking the puck to the eye a few years ago. This was just as scary.

Lundqvist finished the period –giving up the first goal– but did not return. Antti Raanta played well in relief, but the fears about the Rangers defense came to fruition, as pairing Staal with Dan Girardi led to a pair of goals against and what turned out to be an insurmountable deficit.

After one of the scariest moments we’ve seen as Rangers fans, the Penguins struck first. Patric Hornqvist simply trailed this innocent play unnoticed. The puck took a bit of an unlucky bounce through Staal right to Hornqvist. You can see Hank was standing up as the shot was released, so it went under him. Some bad luck, sure, but someone has to pick up Hornqvist.

Also worth noting that Conor Sheary, who banked the puck off Hank, beat Girardi cleanly to that puck. Girardi played the situation fine (in my opinion), but cutting off the path to the net, but this is where mobile defensemen are huge. Girardi thought it was going to be icing, which is arguably worse than getting beat because he stopped skating.

Side note: Antti Raanta started the second period, so clearly Hank was hurt. Obviously he said he wanted to finish the period. But you wonder if Raanta should have gone in at that moment.

Girardi tried to force a shot through with Sidney Crosby on him. It was blocked as Crosby read it and flew the zone behind Girardi and Staal. Easy breakaway goal.

After the Rangers were able to draw two penalties –and six minutes of powerplay time– they were able to capitalize in a big way. Rick Nash was able to get the puck through the crease to Derek Stepan, who had an empty net.

Just after cutting the lead in half, the Rangers gave up a bad shorthanded goal. After Pittsburgh was able to control the puck to exit the zone, none of the forwards backchecked as a 2-on-1 developed. Keith Yandle was unable to stop the pass across from Nick Bonino to Tom Kuhnhackel, and it was an easy goal.

The initial shot from Crosby hit Phil Kessel in front, and bounced behind Raanta, where Hornqvist was able to bury it. Third goal with Staal/Girardi on the ice, yet no changes.

Dan Boyle drew three Penguins to him and was able to get a weak shot off on Zatkoff. No one picked up Stepan, and Zatkoff left a really bad rebound. Stepan roofed it. 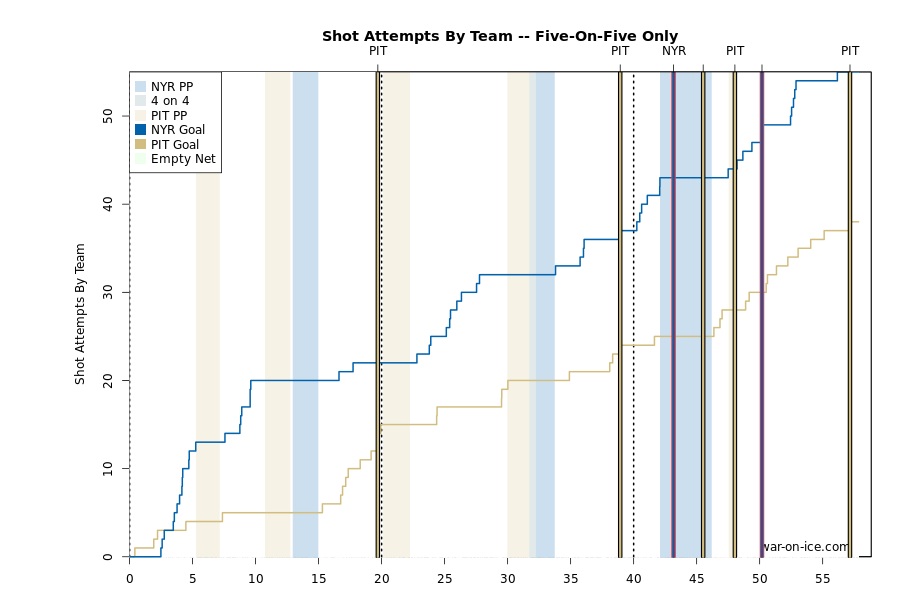 The Rangers came out firing in this game, really controlling the play. But this is the problem I have with only looking at the numbers (which again, I’ve said this a million times, need to look at more). The Rangers did a lot of things well, and it shows up in this chart. But the defensive zone breakdowns –which do show up here, there’s always a Penguins uptick before a goal– are killing them. 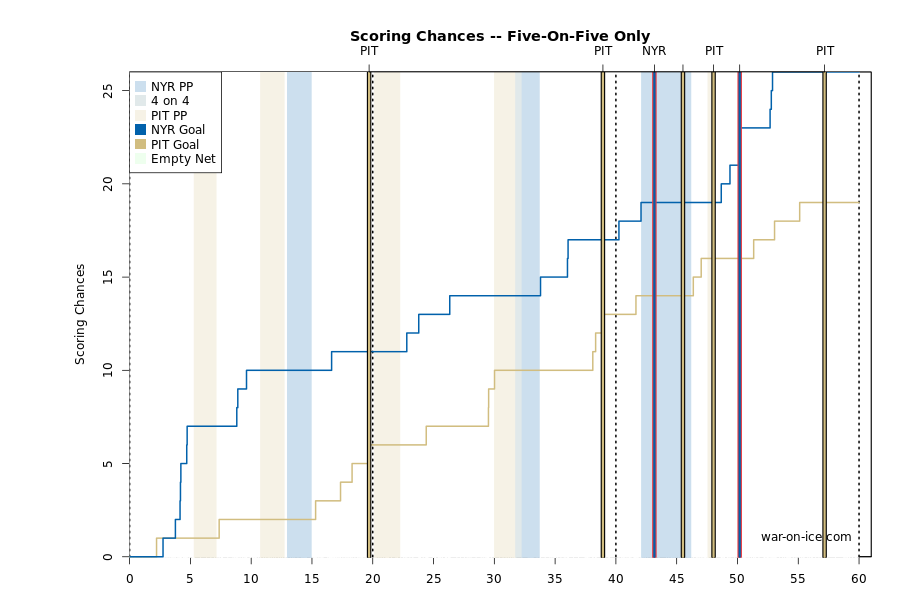 Same thing as above, just with quality chances. 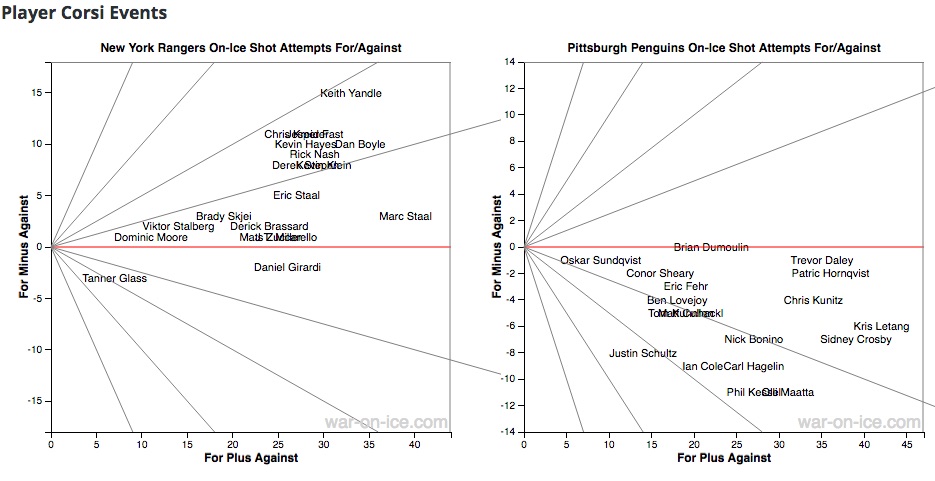 Same thing, just showing where the players are on the possession spectrum. 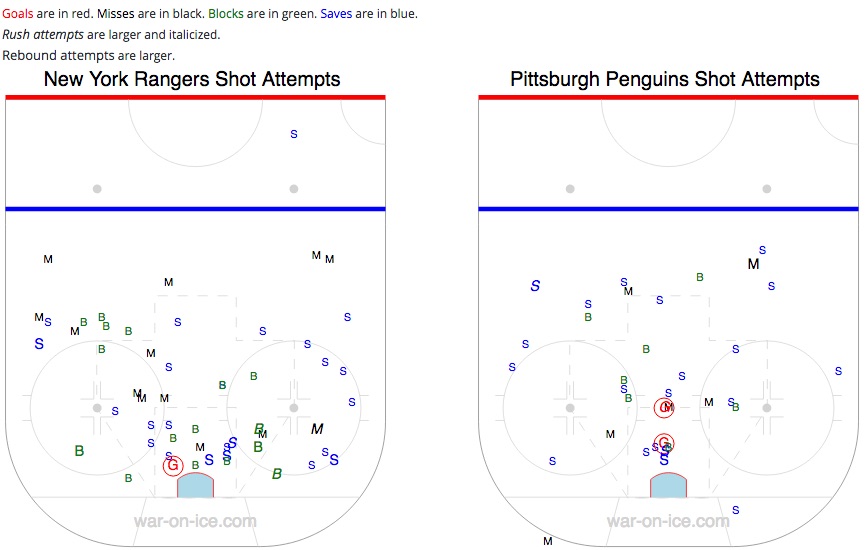 Way too many shots right up main street. Three goals from right there. 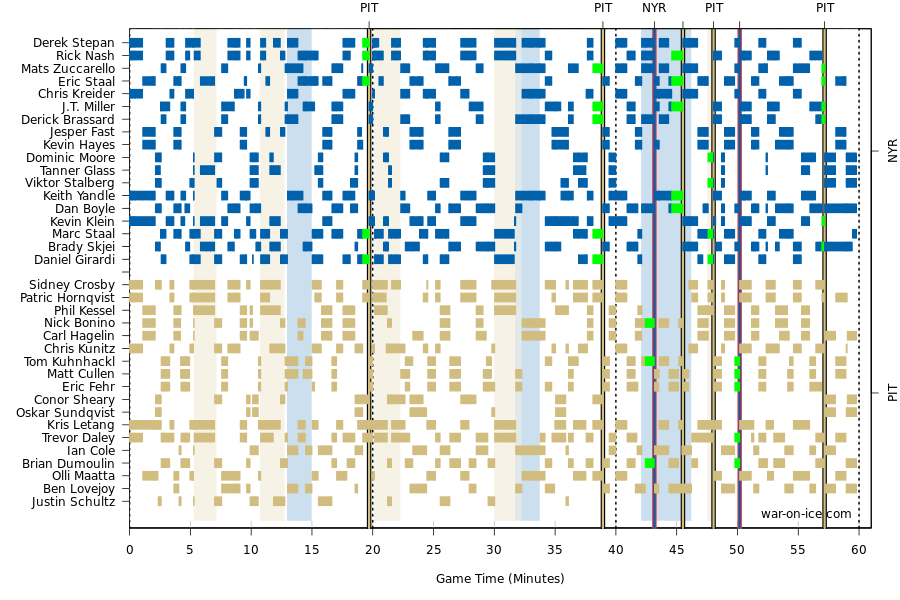 Staal and Girardi got the Crosby line and failed three times. Just bad coaching. Tanner Glass got shifts with the Rangers down two and ten minutes to go. Just, not good. Alain Vigneault got out coached, or at least is relying too much on “his guys.”

It’s just one game, but this was not a good showing by the Rangers. But with Hank, they stand a chance. Let’s hope he’s ok.