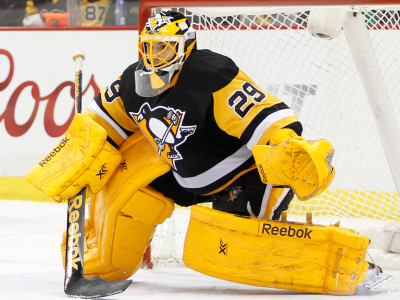 Leading up to the Rangers and Penguins first round match up on Wednesday evening, the boys from Pittsburgh find themselves in a strange situation. Their starting goaltender, Marc-Andre Fleury, practiced yesterday, but is unconfirmed to make it back in time for game 1. Their backup, and highly touted rookie, Matt Murray, is day-to-day after having his bell rung by Braden Schenn in game 81. He is also unconfirmed to be available for the start of the postseason. They have last year’s backup Jeff Zatkoff ready to go, and have called up (slightly less highly touted) rookie Tristan Jarry, just in case.

This puts me in a bit of a bind, since I generally will do a comprehensive goalie breakdown of the tender slated to oppose the Rangers in any given playoff series. Considering this, I’m going to give you a mini-breakdown of all four, so you are covered no matter who is manning the Penguins’ crease. My normal format isn’t going to work for this type of breakdown (you’d be reading for a long while), so I’m going to do a truncated style overview of each goaltender.

I did a pretty comprehensive style analysis of Fleury before last postseason, which you can read here. Consider this section an addendum to that breakdown.

The only thing that has really changed with Fleury over the past year is that he has seemed to finally be a little more comfortable with his own skill set. What does that mean? Well, I’m not in his head, obviously, but I always got the impression watching him that he felt the need to live up to that “Number 1 Overall Pick” label and tried to do too much. This lead to over-committing on plays and relying too heavily on low percentage save techniques, which ended with Fleury out of position far too often.

This season, he seems to understand his role and has played more within himself. His positioning and movement is far more disciplined and has a greater level of poise and patience. He will still flash his athleticism and high-end mobility, but doesn’t allow it to take over what he is doing.

He still tends to get overwhelmed when facing too many options (short side shot versus lateral pass, backdoor pass versus trailer, etc.), which could be exploited if the Rangers get the looks they want.

The Penguins’ 3rd round draft choice in 2012, the highly talented Murray has pretty much laid waste to the AHL at this point. He is tall (6’4”) and lanky (178lbs) and checks all the boxes that goaltending evaluators look at in a future impact starter. He displaced incumbent backup Jeff Zatkoff earlier this season and put up tremendous numbers in limited time this year.

The hallmarks of Murray’s game are a sound positional foundation, tremendous athleticism and his vision allows him to make quality reads and adjustments. He is not one to be taken lightly.

If Fleury is unable to go, Murray gives the Penguins the best chance to win. It will be trial by fire for him in the NHL playoffs, but he certainly has the talent to frustrate New York, especially if their predictable offensive schemes go unadjusted.

Zatkoff signed with Pittsburgh back in 2012 after a four-year stint in the Kings organization (former 3rd round pick), and has spent time both in the NHL and AHL over the past few seasons. When Thomas Greiss left as a free agent, Zatkoff seized the crease as Fleury’s backup before the emergence of Matt Murray.

Zatkoff will be 29 this summer and has steadily developed (albeit slowly) during his AHL career. He has a fairly impressive skill set for what amounts to a journeyman (minus the movement) career to this point. He boasts solid athleticism and technical prowess, but his rebound control and reads leave something to be desired.

The Pens could do a lot worse for their third string goaltender, but if he is the guy who has to carry the load for the Pens, they could be in trouble.

Called up in the wake of the Murray injury, the former 44th overall pick should really just be Zatkoff insurance. Jarry is a very solid goaltending prospect, but has just 33 pro games under his belt and probably shouldn’t be counted on to win a playoff series at this point. What I will say about Jarry, though is that he is a testament to the Penguins’ goaltending depth that we are talking about a fourth string goaltender who would still probably be capable of handling an NHL playoff series with some upside.

I know this probably wasn’t the ideal format to explore the goaltending options for Pittsburgh, but such is life. I would be more than happy to expound upon any specific questions anyone has in the comments if you are looking for more information. Hopefully we have a little more clarity on the Rangers’ actual opposing goaltender in the next day or so.