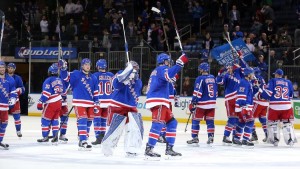 Happy Friday, BSB community.   After what seems like weeks of hand wringing, the Rangers have finally strung together a few solid performances in a row following the disaster in San Jose. Only eight games remaining before the second season starts, so naturally, I have some thoughts…

Some well timed losses from the Penguins and Islanders have given the Rangers a little more breathing room in their quest for home ice in the first round. At this point, they at least control their own destiny. Something tells me they are going to have to earn it, because I don’t see either of those teams doing the Rangers any favors down the stretch.

Looking at the schedule for the remainder of the season, four of the next five games are against opponents who are currently scheduled to head home after the regular season. Considering how tight the standings are at the moment, picking up points against those teams is crucial.

Going into the last two weeks of the season, there are still plenty of teams jockeying for position. That is parity in the new NHL. Personally, I think there are a bunch of mediocre teams fighting it out, but that a conversation for a different day (the Flyers, really?). It should make for some interesting hockey down the stretch.

I understand why they intra-division playoff format exists. The league wants teams with built-in rivalries guaranteed to play each other in the first round to keep interest high before the contenders emerge. My issue is that the seeding/match-ups are difficult for the average fan to determine from looking at the standings (remember when it was just 1-8 on the “Conference Standings” tab? It could also lead to some really boring hockey when a team sits in third in the division with no hope of catching the second place team and no fear from the fourth place team. They could have otherwise been fighting for their playoff lives in the old system.

Still rooting for that Rangers/Islanders first round matchup.

Interesting how mainstream media types are starting to understand the gross misuse of Dan Girardi this season. It’s high time someone on that side of the business called this staff out for its remarkable stubbornness when it comes to deployment and roles on this team.

Defensive issues aside (Hank can mask quite a few of those), if Rick Nash and Eric Staal get going at the same time, this group could be very frightening up front.

I’m going to be very interested in the Vezina Trophy this season. A short time ago, it appeared that Braden Holtby was running away with the award; his traditional rate stats (save percentage, wins, etc.) were off the charts. No advanced stats darling was going to stop him. With his fall back to earth, I’m interested to see the final call. Holtby’s early season play could still carry him through, I suppose. The bigger question to be will come between Henrik Lundqvist and Corey Crawford.

The traditional scouting community is not a Crawford fan. I personally like Crawford quite a bit, but he will be penalized for having a tremendously successful team in front of him. I feel like he gets a little of the Chris Osgood/Mike Vernon in Detroit in the 90’s treatment. Lundqvist’s rate stats aren’t overly sexy (relatively speaking of course), compared to his career statistics, but when you dig deeper and look at numbers adjusted for situation and shot quality, Hank consistently ranks out as the best in the league (again). The wins he has added to the team on his own is in a whole other league. I don’t know if the advanced stats have matured enough for serious awards considerations, but I will be very interesting to follow.

Sean McIndoe (@DownGoesBrown) wrote a very interesting piece on the expansion draft for Sportsnet.ca.  I don’t think the league would ever seriously entertain his suggestions, but it is a very fun read.  Check it out.

Once the playoff picture starts shaking out a bit more, I am going to run some goalie scouting pieces on potential opponents. Let me know if there is any type of information you would like to see included in those articles or if the current format works for you.

Have a great weekend everyone!