Quick thoughts before the weekend 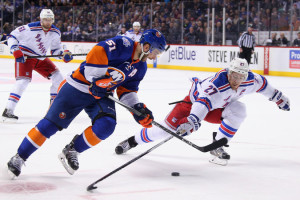 After a pretty consistent schedule, the Rangers have enjoyed three days off before they take on the Red Wings tomorrow afternoon at Joe Louis Arena. That will be the Rangers 68th game of the season, so we are coming down to the wire. Once colleagues and clients start irritating me with talk of brackets, upsets and obscure mountain colleges, I know the NHL playoffs aren’t too far away. Anyway, I have some scattered thoughts…

First things first, I completely agree with Dave’s analysis of getting the most out of the defensive pairs. The usage and deployment concepts Dave was alluding to got me thinking about Ryan McDonagh. I don’t think you will find anyone talking about how he is not an effective top pairing guy anymore, but have you noticed people have stopped discussing him as a massive bargain? Mac is a 26 year-old, top-pairing defenseman making $4.7 million. The wear and tear of dragging Girardi around has taken a toll on his effectiveness and consistency. That shouldn’t be overlooked.

I’m glad to see Hank is looking to make his return sooner than later. Normally, something as work-a-day as neck spasms wouldn’t be cause for concern. However, it was just a year ago that Hank suffered a major vascular injury in the same region. Now, I am no doctor, but I know I was a little more concerned than I would have liked to be when his diagnoses came down.

Will everyone just admit how much this team needs and misses Rick Nash? That guy catches more crap for being a complete hockey player than anyone I have ever seen. I always liked Marian Gaborik, but when he drew fan ire when the puck wasn’t going in the net, I always at least understood. That was really all Gaborik could do. When Nash isn’t scoring, he is backchecking, driving possession, generating opportunities, penalty killing and making generally smart plays with the puck. Maybe if he finds a way to single handedly break triple coverage and score ten goals this spring, people might actually start appreciating what he brings to this team.

Looking at the standings, assuming no massive collapses or 12-0 runs to close out the season, it looks like all but a certainty the Rangers and Islanders will play each other in the first round.   At the center of this is the possibly season ending injury to starting goalie Jaroslav Halak. Pundits and talking heads will be focusing on the Islanders regular season record versus the Rangers and Halak’s relative dominance of the Blueshirts. The problem is, the Islanders’ best goaltender is now their starting goaltender. Thomas Greiss has outplayed Halak all season, both by traditional rate stats and the advanced metrics. The 30-year old German has been basically looked at as a backup most of his career, but people are finally noticing he has the skillset and consistency to start. He could be a very dangerous opponent in a short series.

Chris and Kevin have recently taken differing sides in the Anti Raanta discussion. My take is that Raanta has a tremendous amount of talent, I just don’t know if he would be able to maintain a consistently high level of play over a starters workload. I think if he can be re-signed as a 20-25 game backup at a reasonable rate, by all means. I think the biggest issue is that the Rangers themselves have been so inconsistent, they had to lean on Henrik Lundqvist again to avoid losing significant ground in the standings.

Well, that’s it for me. I’m hoping the Rangers use the rest of the season to correct process deficiencies and ready the group for a long playoff run. Gone are the off-season concerns and future forecasting. The organization is clearly of the mindset this team is a true contender. We will know for sure in a few months. Have a great weekend everyone.