The Rangers continued their success against Dallas Saturday night, although the hard won victory might worry some fans watching closely. The Stars are one of the best teams in the league and have some of the best offensive talent in hockey, and they badly out-possessed the Rangers despite losing the game late in the 3rd period. Henrik Lundqvist stood on his head once again, tracking the puck deftly through tricky plays and nullifying the threatening handiwork of players like Tyler Seguin and Jamie Benn.

Although the Rangers were behind most of the game in shot attempts there were still some things Rangers fans can be happy about. Chris Kreider was all over the ice making plays, Keith Yandle was exceptional once again, and Viktor Stalberg was strong on the forecheck. The Rangers got away with this one, which included a controversial no goal call on Dallas’s part, but it’s a big two points on the road none the less.

Chris Kreider opens the scoring with a nice deflection in front off a great shot by Keith Yandle. It’s a fairly basic play but it was executed perfectly – the Rangers get a clean face off win on the powerplay, work the puck back to Yandle at the point, Yandle takes the shot, and Kreider gets the tip. Couldn’t find a gif for this one, sorry folks.

The Stars tie it up on a big rebound off of Henrik Lundqvist after some strong forechecking. Lundqvist makes the save on the initial shot by Tyler Seguin, but doesn’t control the rebound. Sceviour comes around the front of the net, evading Dan Girardi and getting an extra step around Lundqvist to score the goal. No gif here either unfortunately.

This one sure was a funny one. Chris Kreider gains the zone and Kevin Hayes takes a couple of shot attemps, and the puck ends up down low behind the net. Viktor Stalberg then works the puck up to Oscar Lindberg, who takes a shot from the outside that ends up bouncing behind the net, where Ryan McDonagh flips it on net. The shot actually occurs from behind the goal line, and ends up behind Lehtonen and bounces in off of him.

This is one that Hank probably wants back. Following a clear to center ice by the Rangers, the Star gather the puck and get their breakout going. While the puck is coming down the middle, Valeri Nickushkin is coming down the wing and receives the pass from the center and slaps the shot. While this one deflects slightly off of Dan Girardi’s stick as he’s covering Nichushkin, Hank had clear sight of this one and was visibly frustrated following the goal.

The Rangers get it right back after the Stars tie it for the eventual game winner on a nice tic-tac-toe play. An outside shot is collected by Oleksiak who attempts to move the puck up the boards but is stopped by Jesper Fast at the half boards. Fast the passes it straight to Stepan in the slot, who drops it off for Klein, who rips the shot and puts the Rangers back in the lead. 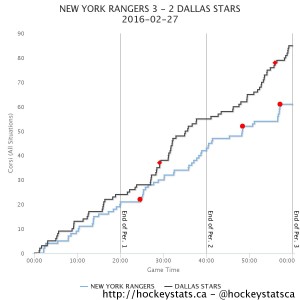 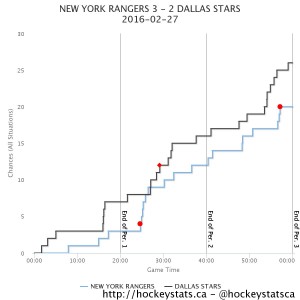 What these two charts show is that despite short bursts of offensive activity, the Rangers were consistently out-possessed against the Stars. Granted, Dallas has some of the best offensive players in the league, but it would have been nice to see the Rangers keep these two categories a bit closer. 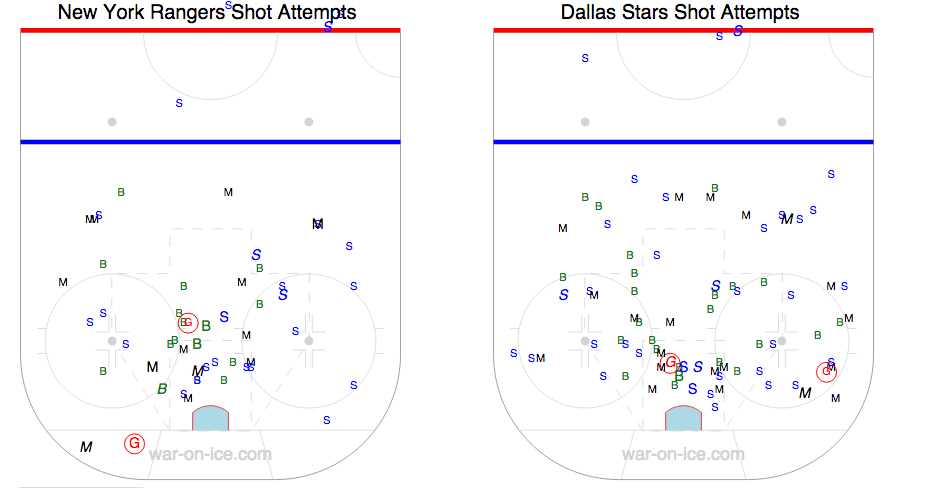 This one actually isn’t so bad, showing that the Rangers got a decent proportion of their chances in the home plate area. Still though, it’s plain to see that the Stars simply had more chances overall, as well as their own fair share of shots down in front of the Rangers’ net.

Although I don’t think the Rangers had quite as bad of a game as these two charts indicate, the Rangers were undoubtedly out-shot the entire game. The only player on the Rangers who was in positive possession territory was Keith Yandle, and most of the Dallas Stars roster found themselves there as well.

Overall you’d hope to see better things from the Rangers heading into the final stretch of the regular season and the eventual playoff run, especially against one of the best teams in the league. The Rangers once again found themselves out-possessed and relied on Henrik Lundqvist to bail them out with outstanding saves. Still though, there were positive things about the Rangers’ game tonight, giving enough cause for optimism that they’ll tighten up their play in the future. In any event, it’s two points.