The Rangers matchup against perennial contenders the LA Kings ended in heartbreak after the visiting team tied it late and came back to win it in overtime. The Kings opened the scoring early, with Anze Kopitar scoring the first of his three goals just 33 seconds into the game. The Rangers came back to tie it and eventually take the lead, but once again Kopitar had their number, sending his team to overtime and completing his hat trick late in the third with the goalie pulled.

While it’s hard to be entirely happy with the way the team played, struggling to generate sustained offense or connect on passes, it is worth noting that the Rangers were missing some key players, and they still managed to walk away with one point on the evening.

Less than a minute into the game Anze Kopitar opens the scoring with a phenomenal shot from the top of the circle. The play starts with an outside shot that Kopitar scoops from behind the net, then coming up and curling back at the top circle before setting up the show.

After a failed clearing attempt by the Rangers, Marian Gaborik scoops the puck up and moves in down the slot. He snaps the shot just between the two faceoff dots, sniping his way to the Kings’ second of the period.

The Rangers got one back before the period was out thanks to a nice feed by Kevin Hayes to set up Viktor Stalberg. Lindberg moves the puck along the boards behind the net where it’s collected by Hayes who quickly turns and slides the pass across the crease to Stalberg, who taps it in for the Rangers first goal of the night.

Derek Stepan gets an unassisted goal to tie up the game at 2 midway through the second period. After a dump in by the Rangers the LA Kings go after the puck, with Stepan coming in to strip the puck away from the defender at the boards before moving in and letting a quick shot fly right in front of the net.

You’ve got to imagine Budaj wants this one back. Chris Krider jumps in to gather up the loose puck after a faceoff, curls around the net and finds Mats Zuccarello in front. Zuc then flips the shot towards Budaj, who just can’t seem to get a handle on it as it trickles past him and into the net.

Anze Kopitar gets his second of the game to tie up the game at 3 goals per team. Following an attempted defensive zone breakout by the Rangers the Kings scoop up the puck at the top of the zone. Lucic then passes it down low to Kopitar waiting in front of the Rangers’ net, and he taps it in for his second goal of the night and the Kings’ third.

Kevin Hayes gets his second point of the game off a nice feed from Mats Zuccarello not unlike his own earlier in the game to set up Stalberg. Zuc enter the zone coming down the wing following a nice stretch pass from Keith Yandle, and then cuts in at the low right circle. He the passes the puck across the crease to Kevin Hayes, who taps it in to give the Rangers the lead.

Kopitar completes his hat trick and sends the game into overtime with a snipe from the half boards following a dish from Drew Doughty. Needless to say this one stung a little bit.

Alec Martinez leads Tanner Pearson with a long stretch pass, with Pearson then letting the shot fly from the outside, winning the game in the process. Not a good look for the Rangers. 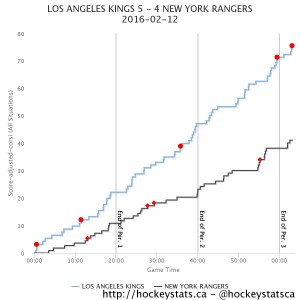 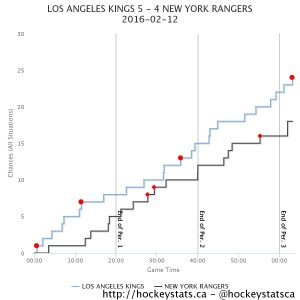 Looking at these charts we can see a couple of things. On a basic level the Rangers were behind all game in both possession and scoring chances. Reading into it a bit more we can see that the scoring chances chart is much closer than just shot attempts, due to the Rangers’ rush game and the short spurts of offense they generated at times during the game. Although we can also see periods of relative stagnation, that the Rangers were able to keep the scoring chances relatively more close than the shot attempts due to short bursts of productivity is something of a silver lining. 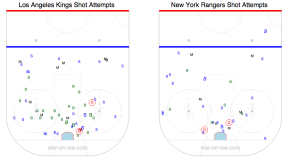 Here we can see that not only did the Kings generate more traffic than the Rangers did, but that they also got a decent amount of it down in the home plate area between the circles in front of the net.