Winter storm Jonas affected the Rangers’ travel plans, meaning they didn’t skate for two days before the game yesterday, and it showed. The Rangers were just flat all game, getting outworked, outmuscled, and just overall outplayed by the Sens all game. The Blueshirts had no answer for the Sens forecheck, which pressured the Rangers into multiple turnovers and forced some great saves from Henrik Lundqvist.

While the defense was shaky for most of the game, it was the inability to generate sustained offense that killed the Rangers. They had very few legitimate scoring chances, and the only two I can really pinpoint hopped over sticks. One of them actually led to the second goal by the Sens. Just a rough game all around for the Rangers, who really needed to build on two strong games prior.

As always, you can view the full videos on our video page here. . I crossed out that sentence because this was the first game in the history of that site that I did not add a single gif to the site. I add the ones that people might like to search by, and there was not one worthwhile gif to keep at easy access.

Kevin Klein followed Bobby Ryan to the corner after a dump in, the right play. He lost the race and stayed with Ryan as he cut to the net. Ryan gave him a little shove, which gave Ryan the inside track to the net. Hank couldn’t handle the initial shot cleanly, and the little shove gave Ryan enough room to outmuscle Klein to the rebound.

This goal came off a counter, when Ryan McDonagh pinched after a Tanner Glass missed chance. Mika Zibanejad chipped it to Mike Hoffman to start the 2-on-1 against Girardi. Girardi played this fine, just Hoffman has a killer shot.

With the net empty and on the powerplay, McDonagh whiffed on a pass, giving it right to Jean-Gabriel Pageau, who fired it 150 feet to the empty net. 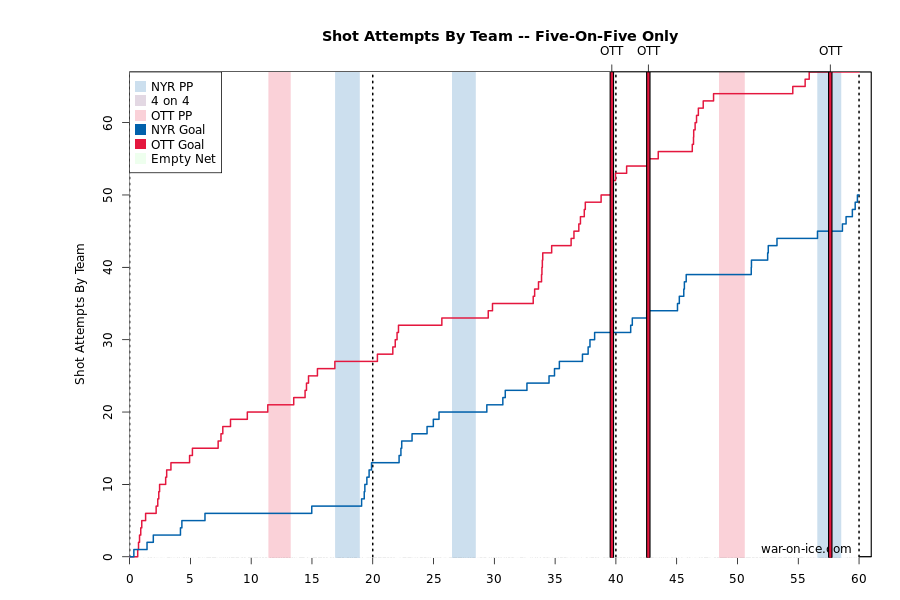 Boy is this ugly. The Rangers didn’t really show up until the second period, and even then couldn’t generate anything sustained. Aside from the offensive struggles, they had no answer on defense for anything the Sens threw at them. 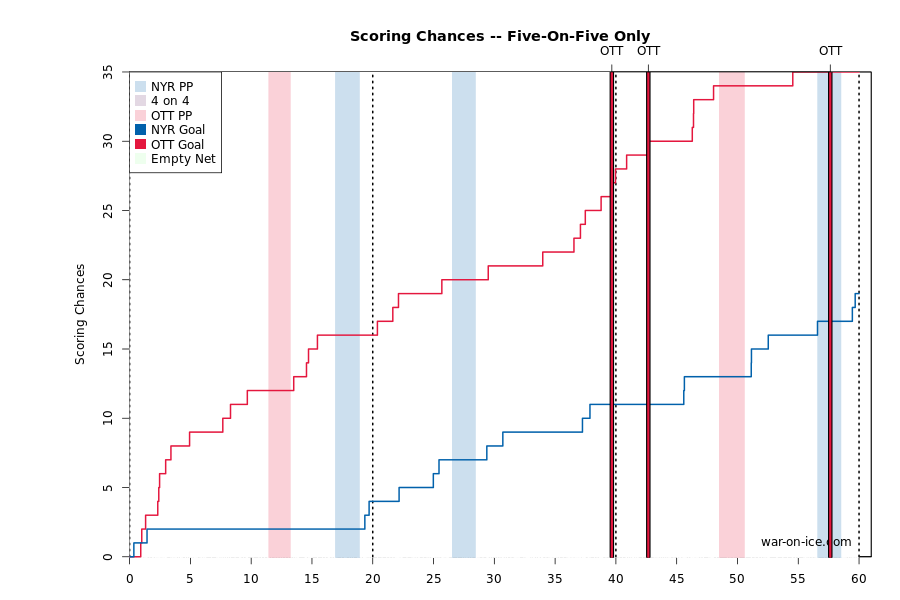 This is just ugly. While the first chart is quantity of shots, this is number of quality shots. The Rangers flatlined for most of the game. Heck, I think they died in the first period. 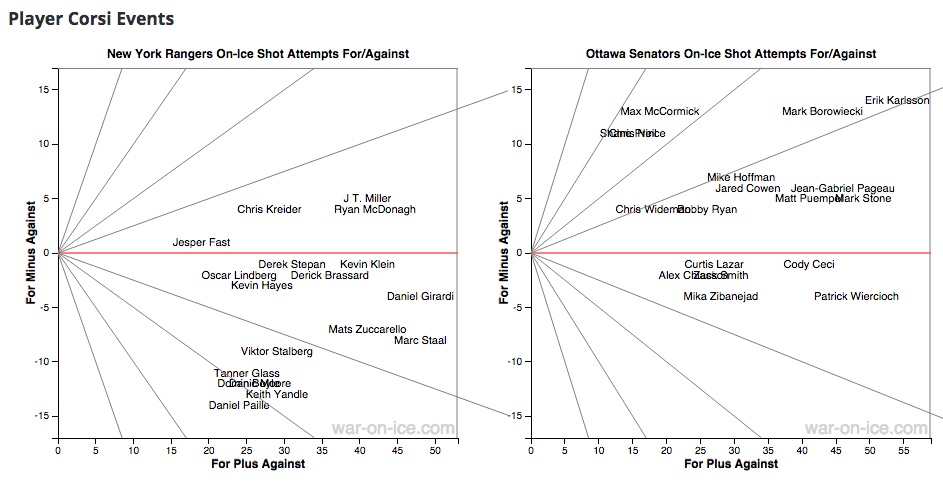 This is consistent with what we saw in the first two charts. Notice the fourth line is buried far down on this chart. That’s not good. Keith Yandle didn’t really have a strong game either. 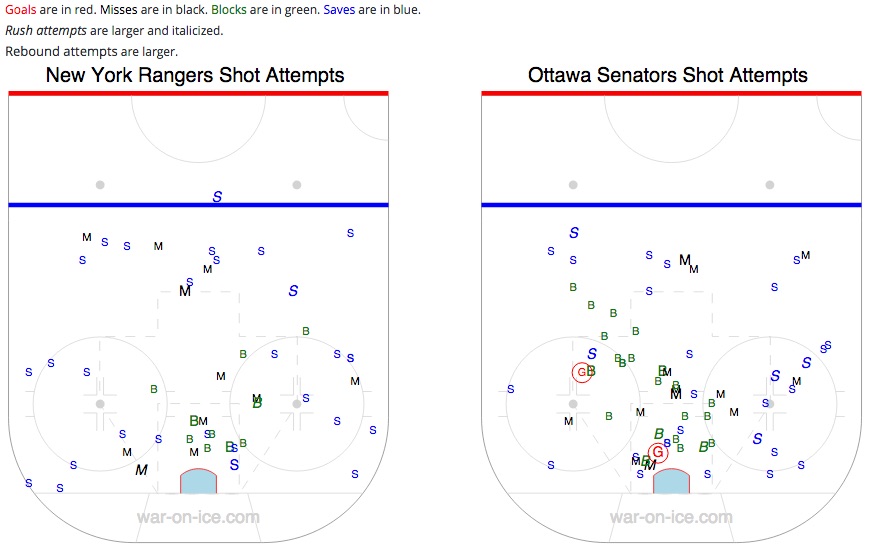 This is in sync with the first three charts. The Rangers gave up a ton of chances in front and generating nothing for themselves. 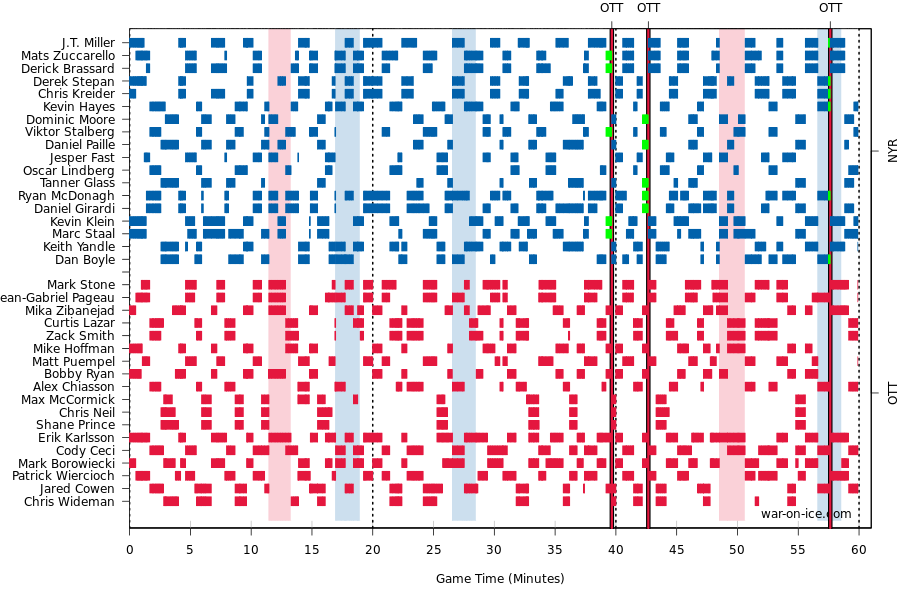 I think, at some point, a question needs to be asked about deployment in the third period. One of John Tortorella’s issues was that he only ran three lines and two pairings. Alain Vigneault does the opposite. He runs everyone, no matter the score. The fourth line shouldn’t be getting shifts when down two and in desperate need for offense. Just my opinion.

This game was ugly, and it would have been really nice for the club to put together a third strong effort. These games happen, although they seem to happen a lot lately with the Rangers. They have one more game tonight against Buffalo before the All Star break. A win sets the tone for the second half.