The Rangers played a solid game last night, but weren’t able to hold on to their 1-0 lead in the third period, giving up a pair of goals in relatively quick goals, blowing their 1-0 lead in the process. An empty net goal made the final score 3-1 in what was probably one of the worst third periods we’ve seen from the Rangers in a while. In addition to giving up the goals, they couldn’t generate anything offensively for most of the period, as the Isles shut it down with a 1-4 forecheck.

I think the flow of the game changed when the refs didn’t allow Dylan McIlrath and Matt Martin to fight at the end of the second period. McIlrath came out aggressive in the third and took a penalty that eventually led to the game winner, and that was all she wrote from there. In the end, three minutes killed the Rangers. Sometimes, that’s all it takes.

Dan Boyle to Jesper Fast to Chris Kreider to Kevin Hayes to Marc Staal, who started it with the pass behind the net to Boyle. What a brilliant passing play.

Hayes had a rough shift on this one. He turned it over at the blue line, then almost took a tripping penalty, then forced a bad pass to Keith Yandle that eventually went to Brock Nelson, then screened Hank.

Nick Leddy took advantage of Derek Stepan covering for Marc Staal, who crept too far over, and darted to the net with John Tavares skating behind the net. Easy goal for him. 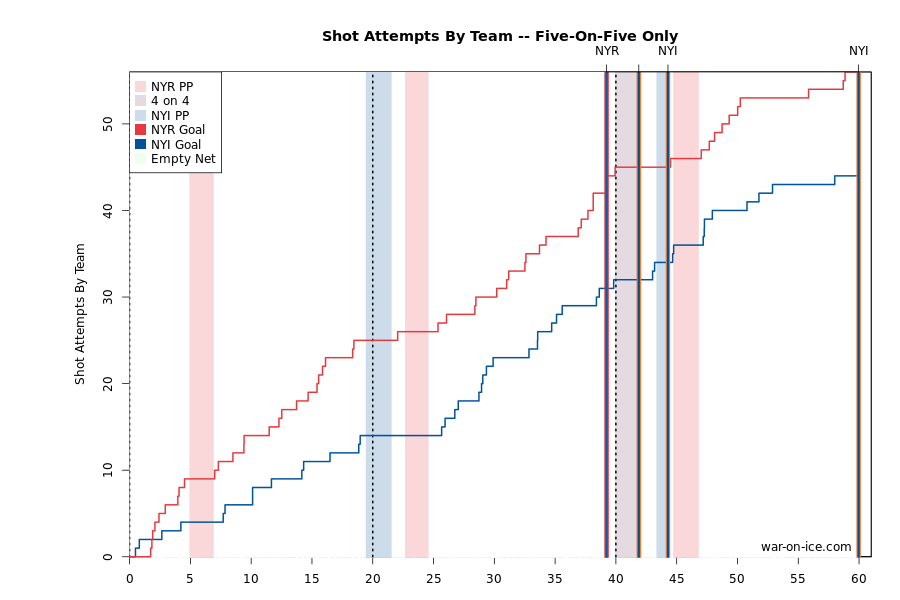 The Rangers really controlled the flow of the game for a while, but it’s amazing how three minutes makes the game look different. One thing to note is the second period from 30-35 minutes. Lots of shooting from both teams there. The game had a good flow to it. 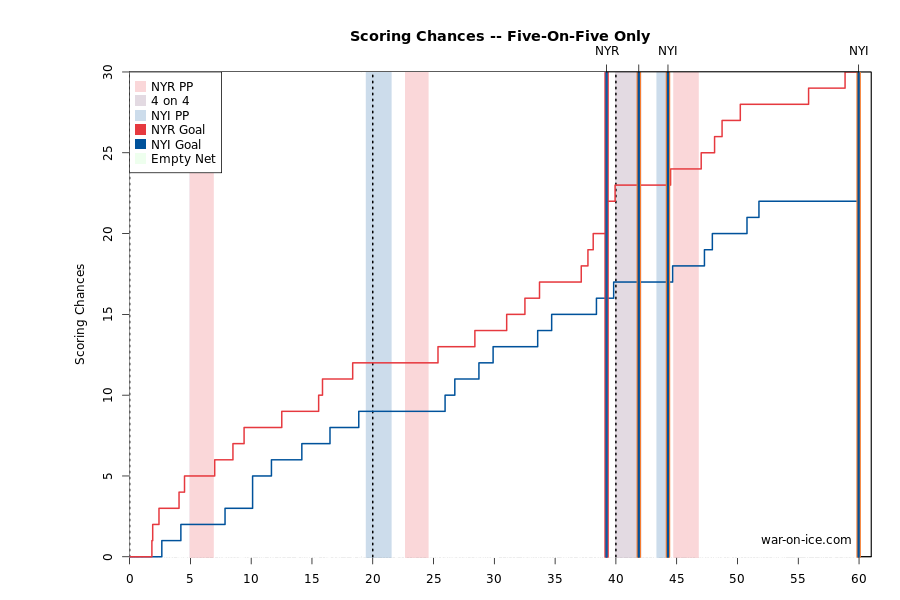 The Rangers not only held overall flow of the game, but were getting good chances too. But again, those three minutes in the third swing a game. Two bad shifts, two goals, one loss. 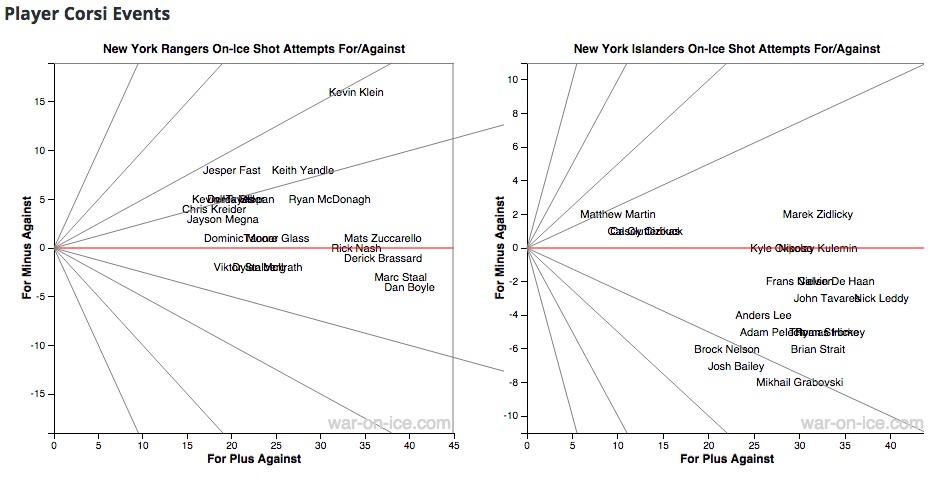 Kevin Klein had one heck of a game paired with Ryan McDonagh, who also had a solid game. That pair and Keith Yandle were far and away the best players on the ice for the Rangers all game, forwards included. 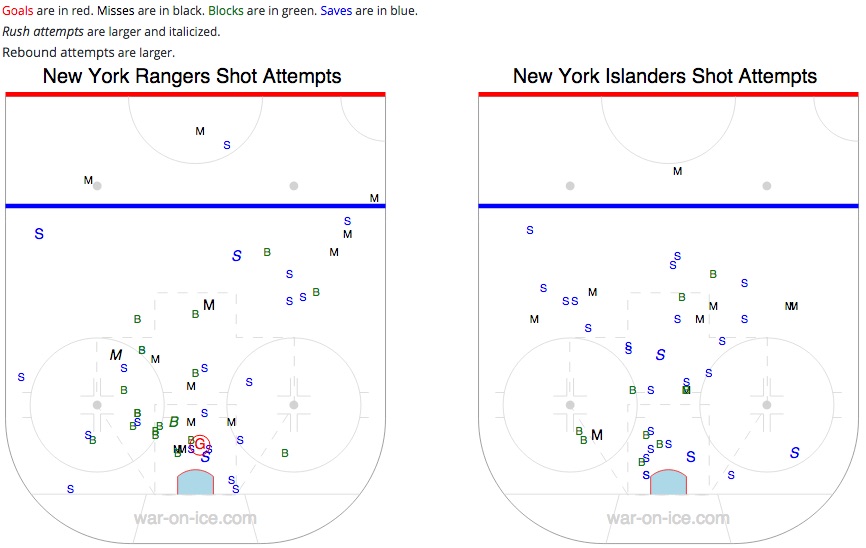 This chart follows suit with what we saw above. Good number of chances in close for the Rangers that were either blocked or stopped, and few chances like that for the Isles. Usually you win these kinds of games. Usually. 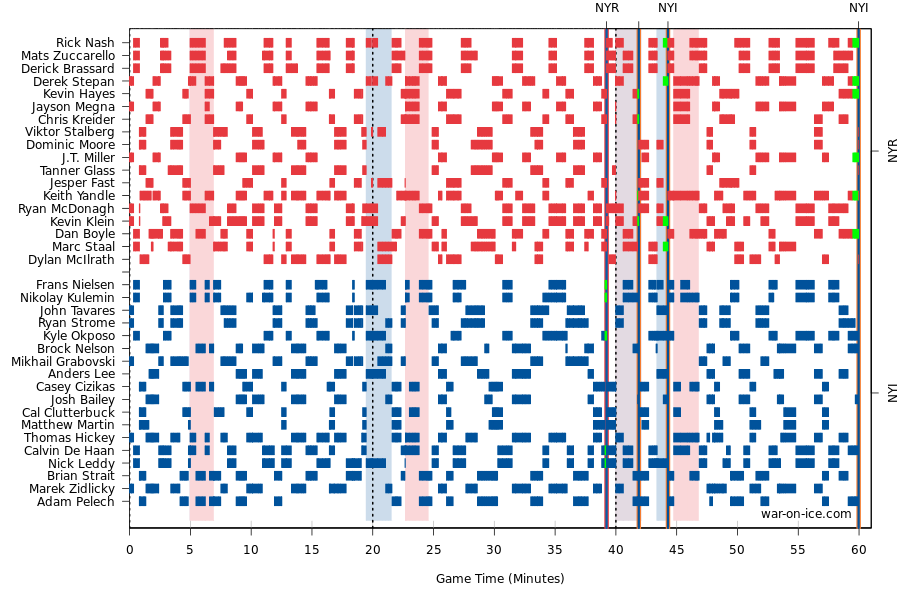 One thing I’d really like to focus on here is that last powerplay for the Rangers. Keith Yandle played the full two minutes, something we’ve been wanting for a long, long time. The problem: Look at the forwards he was primarily with. He didn’t get the top powerplay forwards until the last 30 or so seconds. That’s not ideal.

The overall takeaway here is that the Rangers played another solid game. Sure, the three minutes in the third cost them the two points, and it certainly stings. However this is a few games in a row with a solid on-ice process. The wins will come back with regularity soon.l0o