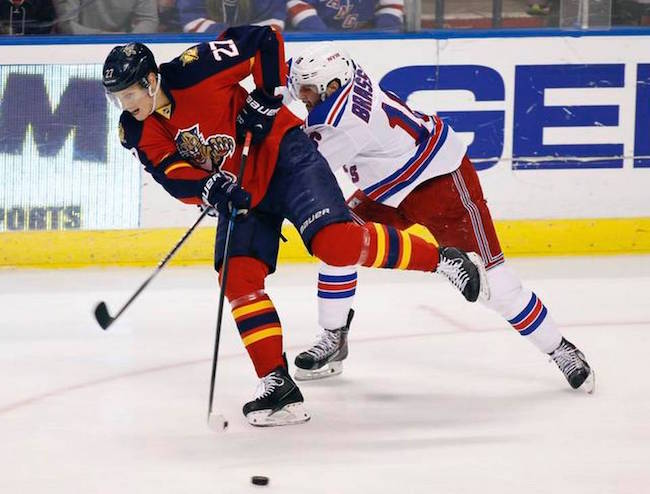 The Rangers played possibly their best game of the season on Wednesday, beating the Tampa Bay Lightning by a score of 5-2. They played solid defense, the goaltending was there, they had sustained offense, and they beat a solid team. The Rangers need to build on that performance tonight in Sunrise against a surprising Florida Panthers club that is second in the Atlantic.

The Panthers are getting solid goaltending from Roberto Luongo. They are also deep offensively, with six guys at the 20 point mark already (comparatively to the Rangers, who have just four players with 20 points). They are led by the ageless Jaromir Jagr, who at 95 years old is the team leader in goals (11) and points (26). He and Alex Barkov form a solid duo on the top line. Suffice it to say, this is not your typical bad Panthers team. They are for real, and will provide another solid test for the Rangers.

The Panthers are on an 8-2-0 run that not-so-coincidentally aligns with much better possession play. Part of it has to do with who they’ve played over the last ten games, but this is a team that has dominating wins over the Isles and Caps in that span. They also have wins over Montreal, Nashville, and St. Louis. This is a solid team on a hot run.

The Panthers have seen an uptick in their shooting and save percentages. Florida won’t continue at this 105 PDO pace, but the Rangers are coming to town at the wrong time. Meanwhile, the Blueshirts seemed to have finished their PDO crash, dropping all the way from 112 to 102.9 (full season numbers). Over their ten-game rolling average (seen above), they are getting back to league average 100 PDO. Assuming the defense shows up, then the worst is behind us.

Gerard Gallant has the Panthers running a 1-2-2 forecheck, which they will use aggressively or conservatively pending the game situation (e.g., the score, puck location, etc.). In their own end, the Panthers play a straight up zone defense. For special teams, Gallant runs a standard umbrella power play and diamond force/box penalty kill system.