Should the Rangers eventually pair Chris Kreider with Marc Staal or Dan Girardi in a trade? 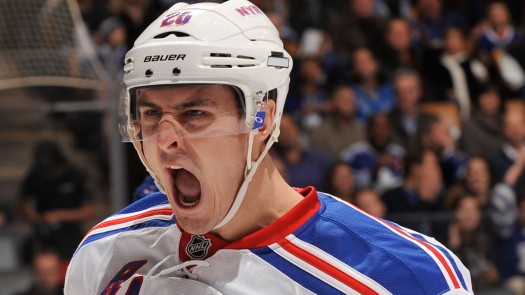 How do you trade Marc Staal or Dan Girardi? Sweeten the pot.

The biggest contributors to the Rangers’ problems are veteran defensemen Marc Staal and Dan Girardi, who have struggled mightily and each have cap hits of at least $5.5 million for the next four years (five for Staal).

Dealing either player will be tricky given their robust contracts and current level of play, but that’s the ideal solution for a club that desperately needs to redistribute icetime and everyday lineup spots along the blueline, and hopes to re-sign Keith Yandle this summer.

Trade rumors are likely to begin flying quickly after the holiday roster freeze is lifted and Staal and Girardi will be at the forefront. But while dumping either for prospects and/or draft picks might be possible, it’s an unlikely course of action for a team that fancies itself a contender. Clearing money from the payroll will become a focal point possibly by the trade deadline and certainly during the offseason, but for now GM Jeff Gorton is still hoping to improve his team for the present.

And that’s why whether it’s now or this summer, New York might have to sweeten the pot to be rid of their biggest headache. To maximize the potential return now, the Rangers could add another appealing piece in a two-for-one swap to a club with both present and future in mind. And if the Blueshirts wait until the summer, they may be in a position where they need to do whatever it takes to get out from under the cap crunch and include an extra piece in a salary dump.

The Blueshirts would have to think long and hard about it, but there is upside to such a move, and the player that might make the most sense is Chris Kreider. There are other players on the roster with value, but many have hefty contracts that would be very difficult for a trade partner to add along with Staal/Girardi, and other youngsters who wouldn’t be as enticing as Kreider and wouldn’t yield the same financial benefits.

Kreider possesses a toolkit that’s overflowing, but thus far the 24-year-old has been wildly inconsistent and shows few signs of putting it all together. Trading Kreider would be a massive gamble, for he still could become an All-Star power forward over the next few seasons. But he also might not – and we’re quickly nearing the point when Kreider’s value will begin to decline if he doesn’t start showing results.

Kreider would be an extremely attractive trade chip that would enable the Blueshirts to move Staal or Girardi and get quality player(s) back, and he’s also due for a raise on his $2.475 million cap hit as a pending restricted free agent. Moving Kreider with one or the other could save upwards over $8.5 million, which would be enough to secure Yandle’s future on Broadway.

What could a Kreider + Staal/Girardi package fetch? Before he caught fire a month ago, Matt Duchene was a player frequently in the rumor mill that could have been a possible match from a young team that still needs defensive help and has money to spare. Duchene is an extremely talented player with speed to burn that could also benefit from a change of scenery – but of course, he also has a $6 million cap hit that would mitigate some of the cap savings New York so desperately needs. Still, there are deals that just might be out there and could provide the shakeup, financial savings and potential improvement the Blueshirts are looking for.

It’d be a dramatic decision for sure, but the Rangers haven’t shied away from those in recent years. Personally I don’t think I’d be willing to part with Kreider without seeing him develop for a few more months. But if things haven’t improved by this summer…