Thoughts prior to “Glen Sather Night” in Edmonton 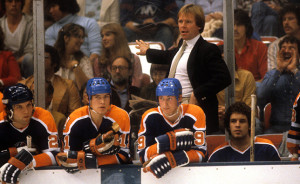 After a tough loss against Vancouver, the Rangers continue their west coast trip tonight in Edmonton. Between late games and a somewhat erratic, feast or famine schedule, I have some scattered thoughts…

1) Can you believe we are past the 1/3 mark of the season already? I am of the mind set that the first third is for evaluating your systems and personnel, the second third is for making adjustments and the final third is for making that push toward the playoffs. Injuries to Kevin Klein and Derek Stepan have thrown something of a wrench into that plan.

2) Speaking of those injuries, they have really wrecked havoc on AV’s deployment and line management. I understanding you are without one of your top-six centers and top-4 defensemen. That would be a serious issue for any contending team. The concern I have is that it seems like AV is putting a greater focus on trying to find lightning in a bottle with his line combo’s than he is trying to find a reliable balance.

3) The biggest issue, obviously, is that Tanner Glass is in the lineup and Emerson Etem is not. I get that Ryan Gropp and cap flexibility were the biggest assets in that deal, but come on. You traded Carl Hagelin for Etem and you put him behind Glass on the depth chart?

4) Glass aside, I feel like AV also miscasts Jesper Fast as a top-six player. This is not a knock on Fast; he is an incredibly intelligent, responsible player with quite a bit of skill. He is just much better deployed in a bottom-six role. I think Fast’s deployment, more so than anything else has been a reason for Etem’s press-box treatment. That, and keeping Jarrett Stoll in the lineup.

5) Dave already covered it, but Dylan McIlrath has been a very pleasant surprise. I don’t think he will ever grow into the talent reserved for top-10 draft picks, but he still has a ceiling to grow into a useful piece after being labeled a “bust” for the past few seasons.

6) We talk a lot around here about process versus results. Earlier in the year, the Rangers were getting tremendous results with a sub-par process. The metrics were a mess, but they were capitalizing on their chances at a much more efficient rate than their opponents. It is now swinging the other way. I’ll admit I did fall asleep during the Vancouver game also (we’re old men now, get off my back), but over the past few games, they have cleaned up a lot of the defensive zone issues and created more consistent offensive zone pressure. This is a good thing, even though they have been 2-5-1 since their stolen win against Nashville. If that is the storm they have to weather to get a sustainable winning model back on track, I’ll take that every day of the week.

7) I want to take a few minutes and talk about the future a bit. The defensive picture over the next few years looks like a mess. You have Yandle and Boyle as UFA’s this offseason. While Boyle is as good as gone, Yandle is a guy the team should look to retain. Kevin Klein remains under contract for two more seasons, and Dylan McIlrath’s RFA raise shouldn’t be too significant, since he is only getting his first NHL action this season. Ryan McDonagh is cost controlled for three seasons beyond this one, as well.

8) Then, we have the anchors. Staal and Girardi make $11.2m combined. That is almost 16% of the current cap. Obviously, Staal still has more value than Girardi, but it would still be a tough hit to move. Staal has a NMC and would most likely want a move to a contender, who usually have limited cap resources.

9) Looking beyond the current core, Brady Skjei is really the only defenseman in the system ready to take a full-time job, and while you might be able to get some cheap depth on the UFA market, it’s a bit of a tire fire back there. I’m not sure exactly where I am going with this, but the front office needs to take a long, hard look at the blue line construction going forward before Yandle signs elsewhere.

10) Staying with our future theme, and assuming the appropriate moves to allow for it were plausible, how top-heavy, cap-wise would you be willing to get to accommodate Steven Stamkos? Would you be willing to deal Derek Stepan? Rick Nash? How you would propose to fit a $10m cap hit? Or would you rather Kopitar? It is a rare off-season in which two prime-aged centers are hitting the UFA market at the same time. Stamkos is younger, which makes him the better bet for more prime years, but there is no denying Kopitar’s talent. Or would you rather watch some other team destroy their cap?

11) I don’t get to watch a ton of Oiler’s games (I already told you I’m an old man), but I am really going to miss the lighting at Rexall Place when they move next year. Every time I flip through the Center Ice Package, I can tell immediately when it’s a game in Edmonton by the way the ice looks. Gorgeous.

Alright, that’s it for me. Enjoy the game and your weekend, everyone. I’d love to hear your thoughts on my thoughts in the comments, as well!