The Rangers got their collective acts together last night, putting together a solid performance in a dominant 4-1 win over the Senators. The Rangers controlled the flow for the majority of the game, with a few blips in the second period that tilted the ice for the Sens. This was a complete team win up and down the lineup, but those with notably positive games were Derick Brassard, Dylan McIlrath, Ryan McDonagh, and Chris Kreider. All three were very active.

Henrik Lundqvist was his usual strong self as well, but he didn’t need to stand on his head this game. The Rangers were much more relaxed and competent in their own zone, making the right plays to transition to offense. The forecheck was active, keeping the Senators from really breaking out with speed. The offensive zone play was solid, getting multiple attempts, getting to dirty areas, and working along the boards. The product on the ice matched the scoring chance/puck possession battle, as expected.

This is how a powerplay is supposed to work. First, Chris Kreider was in front providing the screen. When Keith Yandle got the puck, he drew the attention of his man and the man who is supposed to respect the Ryan McDonagh shot. This gave McDonagh room to one-time the pass. With Kreider in front, Craig Anderson never saw it.

Another “back to the basics” powerplay goal. McDonagh got the puck from Rick Nash at the point, then moved slightly to change the angle of his shot. He recognized traffic in front from both Dan Boyle and Derick Brassard, and wristed it on net. Boyle provided the screen, Brass the deflection, and Anderson never stood a chance.

This was a bad goal to allow. The faceoff loss aside, Viktor Stalberg got tied up with Chris Neil, which meant it was Tanner Glass’ job to get to the puck, since it was going slow enough. He backed off the play to cover his man (Erik Karlsson), which allowed Marc Methot to step into the shot. There’s a chance for a transition there. Then, for some reason, Marc Staal deflected the shot with Chris Neil behind him. Just not a good goal.

McDonagh lifted a soft pass from the defensive zone to the neutral zone that took a bad bounce over Chris Wideman’s stick and gave Brassard a breakaway. Brass ripped a slap shot past Anderson, who was off his angle a bit.

Jesper Fast got the empty netter. 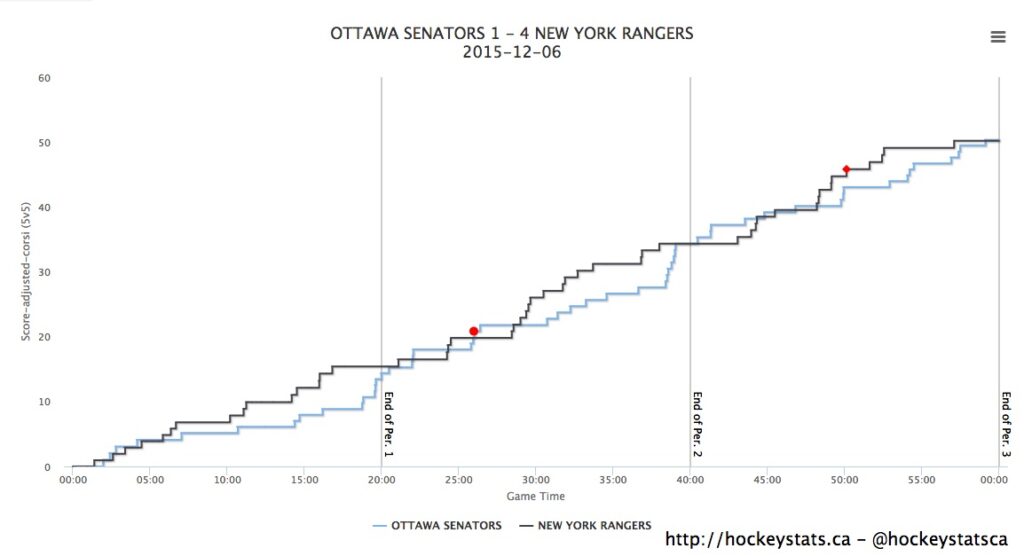 The Rangers had the upper hand on the Sens for most of the game, but there were a few blips in the second period, specifically to close out the period. The Sens had the Rangers pinned then, but other than that, it was a very strong showing for the good guys. 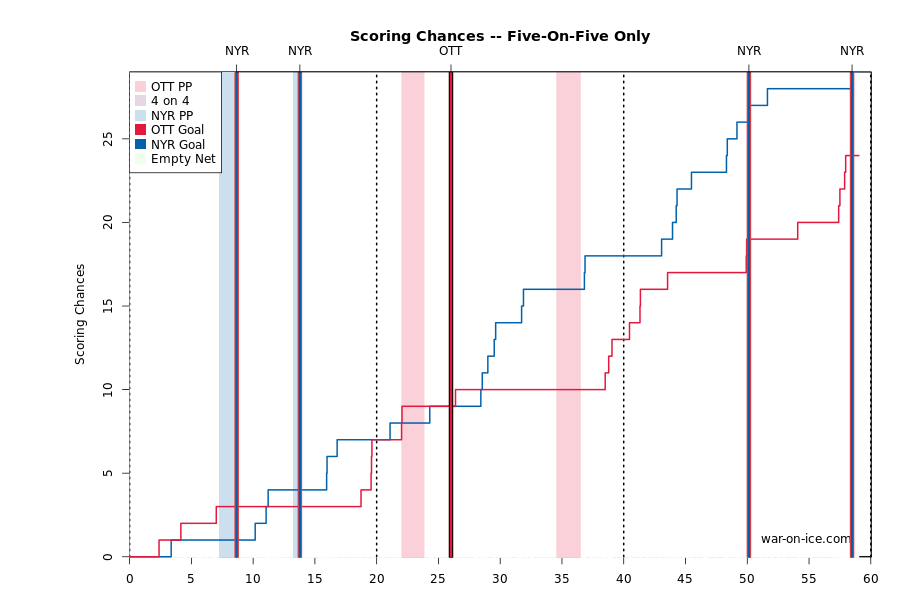 I prefer the scoring chance chart to the overall Corsi chart because I think it tell you more. Corsi gives you general flow, but scoring chances lets you know how dangerous that flow was. The Rangers got a lot of good scoring chances throughout, and their defense did a good job limiting the Sens. Overall, a solid game.

I’ve been going back and forth on removing this from the analysis. It doesn’t really tell you much, since it’s single game samples. Let me know in the comments if you prefer it. This is also a test to see who actually reads through the chart analysis. 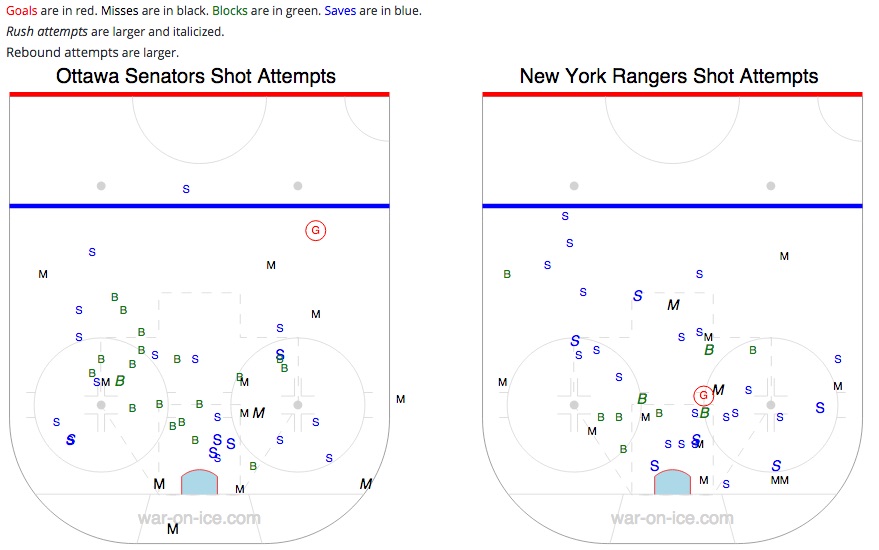 It’s been a while since we’ve seen this many attempts from the Rangers in the high danger areas. They got to the front of the net and looked for loose pucks. This is what you want to see from them. 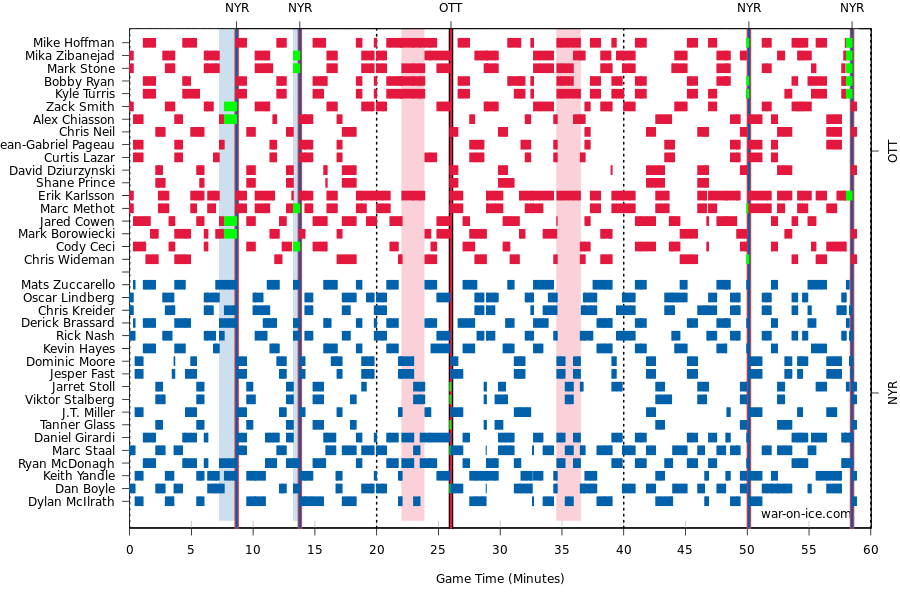 Standard Alain Vigneault home matchup, however he needs to get amnesia when it comes to pairing Staal and Girardi together. They are just awful as a pairing. That needs to stop, and it needs to stop yesterday.

Hopefully the Rangers can take this game and learn that this is how they need to play night in, night out. That’s two strong games this month, with a poor one wedged in between. It is December, after all. Maybe now is when they pick it up.