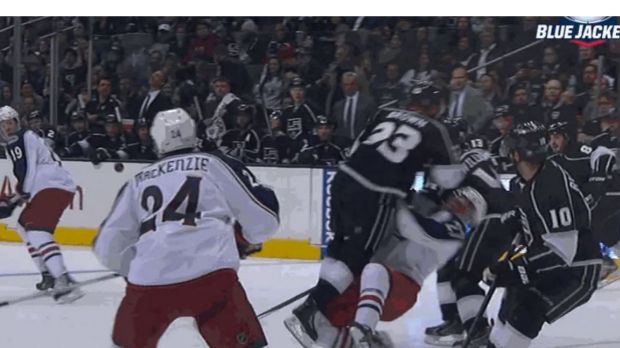 It feels like every season I find myself writing a post scorning the dangerous play of a handful of NHL athletes, and this past week’s action by Flyers’ defenseman Radko Gudas. Gudas took liberties with a hit on Senators’ forward Mika Zibanejad, going for a clear head shot while playing the puck(???) last Tuesday:

Zibanejad to the locker room after this hit pic.twitter.com/boaupGEHaz

The fun part of situations like this comes when you read people defending the actions of the Flyers’ “defenseman,” loosely quoted because between this year and last with Tampa, I can’t remember a positive hockey-related thing he has done. Or a positive thing at all, but I digress. Sure, it wasn’t charging or interference because Zibanejad had just passed the puck. However, instead of tracking the puck, Gudas feels the urge to introduce Zibanejad’s face to his forearm. Maybe he was feeling amicable, who knows.

Stephanie did a great job of slowing down the gif posted above to show three major points of conversation: 1) Gudas zeroed in and focused on hitting Zibanejad, instead of playing the puck, 2) Gudas drove up with his elbow, and 3) Zibanejad’s head was the principal point of contact. I’m not a ref, and I’m not too familiar with medicine, but i’m 99% sure that a driving elbow to the head is a key ingredient in a concussion. You know, those things that the league is trying to minimize, the reason that the Department of Player Safety exists. Luckily for Mika, it seems that he didn’t suffer a concussion and didn’t miss much time. The DoPS also finally suspended Gudas. Three games isn’t enough, but it’s better than what he got for concussing Victor Stalberg earlier in the year. Watch the hit from October 24 here:

Was this hit better or worse than the hit on Zibanejad? According to the DoPS, much better, since he didn’t even have a hearing for concussing Stalberg.

Now, if we’re looking to play the blame game, of course a lot of it comes with the player. However, when the punishment is inconsistent, and the on-ice officiating is downright laughable, are we really doing enough to avoid injuries? We see what concussions do to the brain after time, and the league is even involved in technological advancements in helping downplay them, but to suspend an average-at-best player whose main job is to bully a few games, who are we kidding? Do we need more Derek Boogaards, whose job was to fight and scramble his brains, to pass away before we make a change?

The shift in the game to skilled players rather than goons is certainly in place. Now we can just hope that DoPS has harsher suspensions for aggressive head shots that end not only seasons, but careers and lives as well.