The Rangers played their best game of the season last night, but fell to the Isles in a shootout last night. This game was probably the most entertaining game we’ve seen all season. Both teams were flying, there were few penalties, lots of chances, and action all around. Henrik Lundqvist and Jaroslav Halak were brilliant, stopping most of the chances thrown their way. It wasn’t a wide open game, and there was some rough stuff, but it was up and down hockey with very little neutral zone play.

Keith Yandle had easily his best game as a Ranger, and was engaged all over the ice. Tanner Glass also played a great game, getting a few solid scoring chances while playing on the third line with Oscar Lindberg and J.T. Miller. The defense was much better at moving the puck up the ice in the defensive zone, and the forwards were much better at coming back and giving them targets to hit to start the breakout. The forecheck was also on point the entire game.

There’s not much to really say on this one. It was a 5-on-3 created by a bad stick penalty on Keith Yandle and then a delay of game penalty on Dan Girardi. I really hate that puck over the glass rule. John Tavares was given a bit too much room here, but it’s a 5-on-3.

Viktor Stalberg and Dominic Moore worked behind the net, and eventually Moore got the puck to the point for a one timer from Yandle. Tavares knocked the puck down, but it went right to Stalberg in front, who put it through Halak’s wickets. 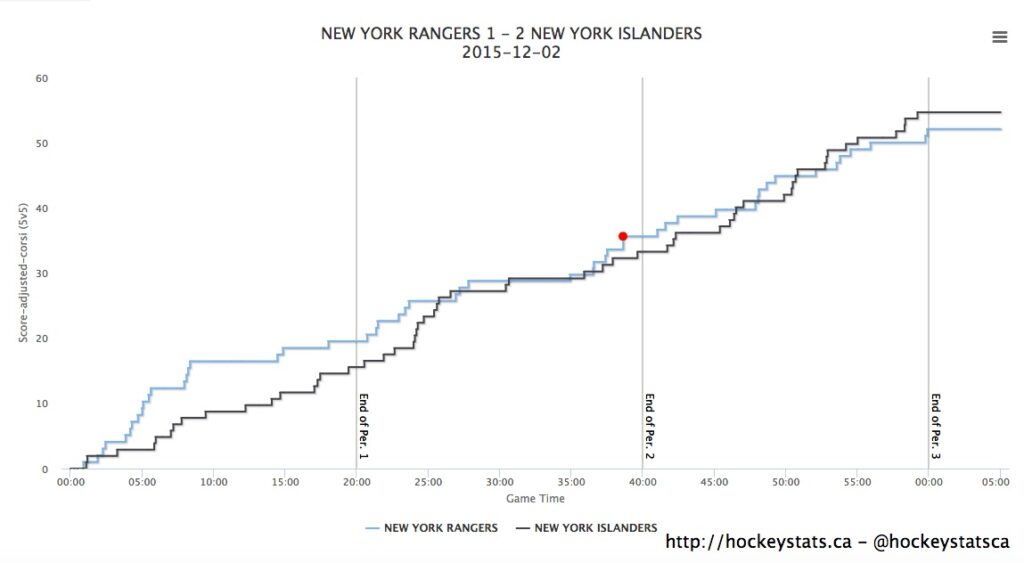 The Rangers really owned that first period while the Isles took their time remembering they had a hockey game to play. The Isles woke up in the second, then both teams exchanged chances throughout. The Rangers did a good job recovering when the ice tilted in the Isles’ direction to open the second period. 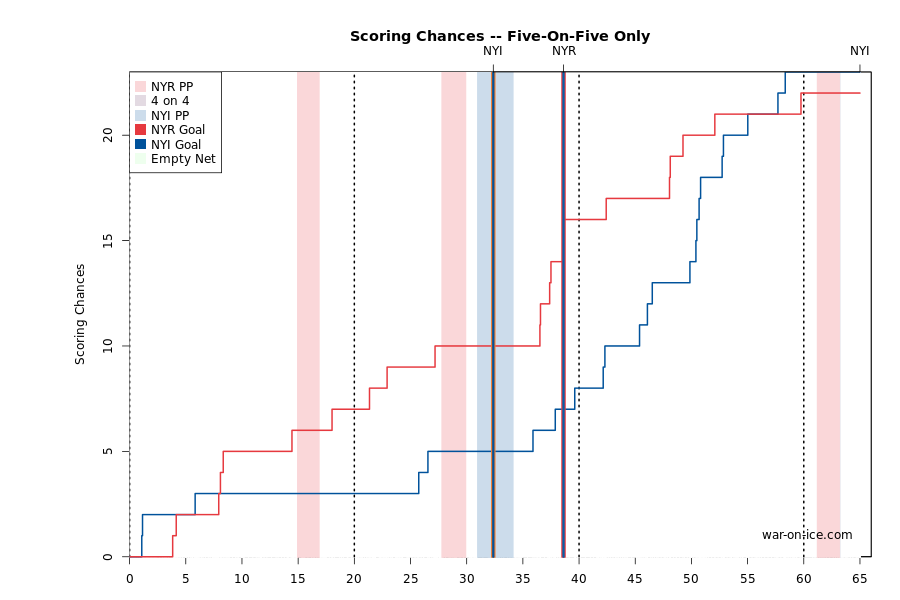 I find this one to be interesting. The Rangers dominated the first, as noted above. But while the Isles recovered in overall shot attempts in the second, the Rangers didn’t give them many prime chances. It wasn’t until the third period that the defense for the Rangers started slacking a bit, hence all the chances for the Isles late. Not a good thing to see. 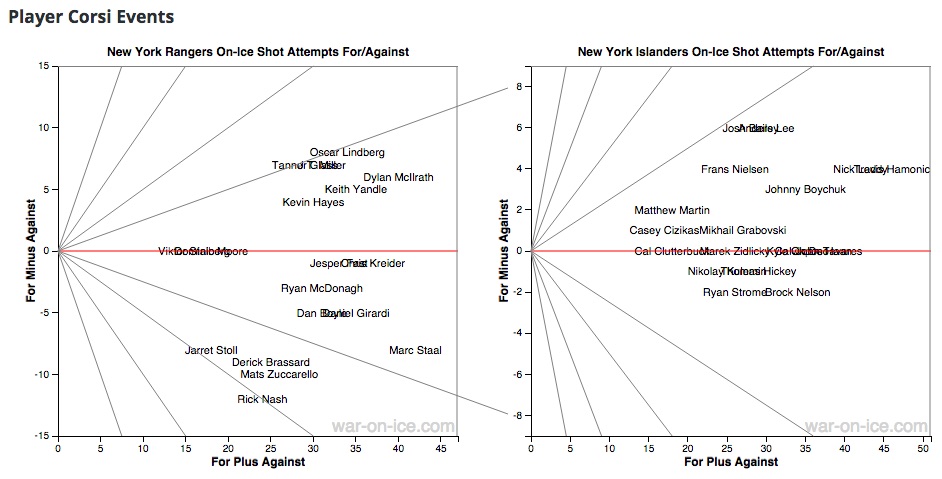 The Miller/Glass/Lindberg line had a great game, but the top line had a rough one. Jack Capuano tried to get the Tavares line out there against the Brass/Nash/Zucc line as much as he could, and it showed. 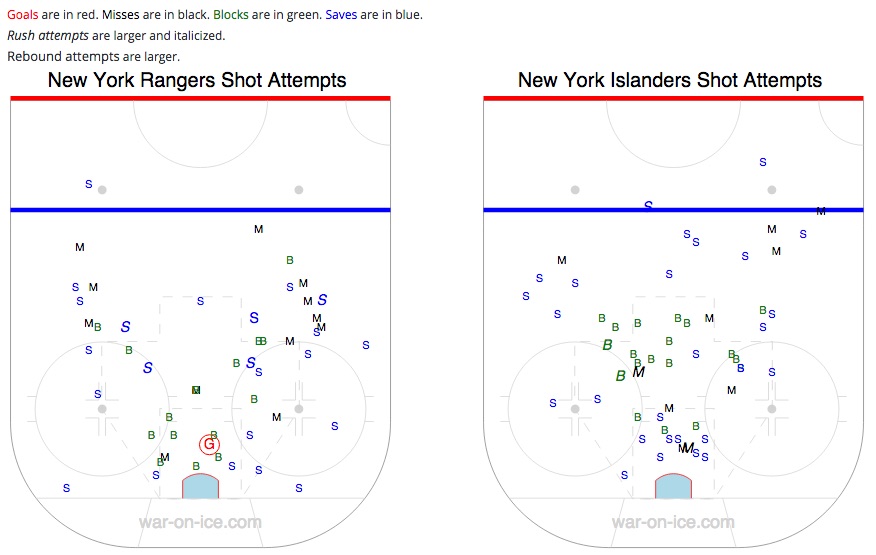 Most of the chances inside the high danger areas for the Isles came in the third period, when Hank stood tall. Ideally, you’d like to see more shot attempts in this area by the Rangers, but I thought overall they were fine. The third period was a bit of a defensive mess, though. 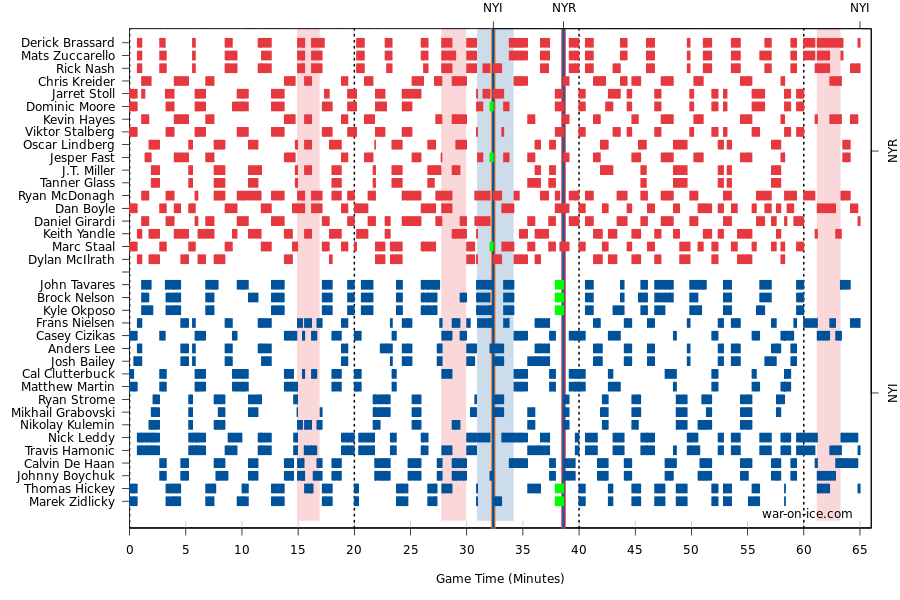 Without last change, Alain Vigneault had to do what he could for matchups. As mentioned above, Capuano tried to get top lines against each other, which favored the Isles a bit. But Capuano got burned by trying to put his third and fourth lines out there against the Rangers third line. It’s something AV might want to take note of and try to exploit next time these two meet.

When I say I want the Rangers to play better, this is the kind of game I want to see from them. Yea, they lost. Sometimes, you lose in a shootout. The process was much better in this game, though. If the Rangers play like that for the rest of the season, they will win a lot of games.