Are the Rangers missing a trick with Emerson Etem and Dylan McIlrath? 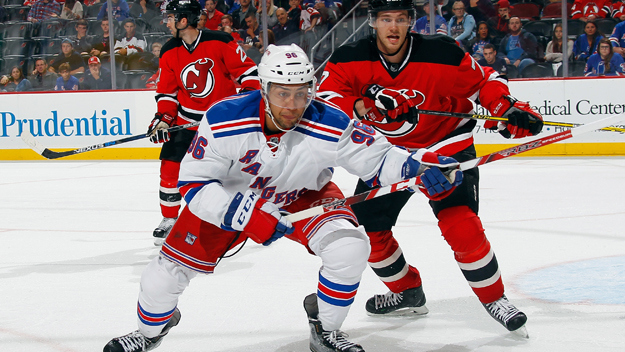 Etem needs a regular role. Even if he hasn’t earned it yet.

There are many different ways to develop prospects but are the Rangers – and coach Alain Vigneault – mishandling Emerson Etem and Dylan McIlrath? Sometimes a team needs to let a player grab a regular spot even before he’s earned his role. Maybe the Rangers need to lengthen the leash for Etem and McIlrath while the season is still early.

The Rangers have two unique prospects on their hands in Etem and McIlrath. A team not known for their physicality, the Rangers could surely benefit from Etem and/or McIlrath establishing themselves in the rotation. Etem has one of the biggest bodies up front for the Rangers and has speed the team would love to see more of. McIlrath of course, is a massive presence on the blueline who is comfortably the biggest, most physical defenseman the Rangers have on the backend. The problem is, neither player has been able to display their physical talents nearly enough. Part of that reason is opportunity.

McIlrath has played just three games, all at the expense of Dan Boyle, and has had no chance to establish any game to game continuity. McIlrath arguably played his best game against the Avalanche, the one time he has been able to play back to back games. His reward? Back in the press box against the Coyotes. As a big body and as a rookie learning the lay of the land in the NHL, McIlrath needs game time not prime seats for the best team in New York.

Etem’s problem has been slightly different. While Etem has also struggled to crack the line-up, when he has made it in he’s been used as a fill-in for the most part and has bounced up and down the line-up. While Etem was rewarded for his progress over the past week by retaining his place in the line-up for Tuesday’s game against Carolina, he was bumped from the top six to the fourth line, a line where the emphasis and style of play are clearly different.

Of course, no one is expecting Etem to keep his place ahead of the returning Rick Nash but if the Rangers are going to properly develop Etem they need to give the young power forward some consistent ice time in a regular role and let the young forward learn through any mistakes he makes. Anaheim weren’t able to give Etem the right kind of role consistently and eventually moved him on despite his obvious talent.

The Rangers are missing a trick with Etem and McIlrath. As a team with envious depth compared to the rest of the league, as a team that has gotten off to a strong start and as a team who can absolutely expect bigger contributions from integral players such as Rick Nash, Chris Kreider and Ryan McDonagh, the Rangers can afford to put the two youngsters in and let them make mistakes and (hopefully) learn and develop from them. Will anyone truly care if the Rangers drop a few extra games in November when this team’s focus is clearly beyond April?

This Rangers team isn’t about the regular season. It’s about peaking at the right time and being best prepared for the playoffs and in the playoffs it’s often the teams that have the best depth that win. Dylan McIlrath, and in particular Emerson Etem, have upside, not just now but for the future. Persevering with an ageing Dan Boyle in November isn’t the answer even if it’s Boyle that rightly or wrongly gets the call come the post-season.

The Rangers don’t just need to know what they have in Etem and McIlrath for the now, but for the future. Both players are on cheap contracts and the Rangers have significant negotiations approaching with Keith Yandle, Chris Kreider and Kevin Hayes. Developing two more young players such as Etem and McIlrath and helping them grow into full time, established players for next season would be a huge boon to the Rangers’ depth for the future.

Young players learn from taking in what their veteran teammates do on the ice – they learn by example. But repetition, consistency, careful management and trial and error are important methods for a young player to grow from. Can the Rangers honestly say they’re doing the right thing by Etem and McIlrath right now? Would a few more games before the stretch drive hurt this team’s ultimate goal of a Stanley Cup or help them achieve it?