What to do with Emerson Etem? 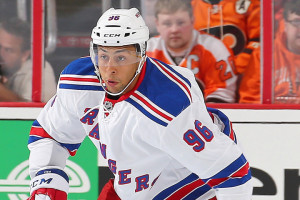 Last night in Montreal, Emerson Etem made his New York Rangers debut. It was rather unceremonious, as he played a grand total of 7:09 on fourth line duty, and was buried for 86% DZ starts. Not exactly the ideal deployment of a guy who is lauded for his offensive skillset.

Personally, I am not a huge fan of Etem’s game. I will be the first one to admit that he is a tremendously gifted offensive player. He has great hands, shot and skating agility. Decision-making, effort level and one-dimensional skillset are the critical concerns I have with Etem. The Rangers traded an extremely versatile player in Carl Hagelin for the young winger, and while I am not here to lament the merits of that trade, it does create something of a roster imbalance.

The Rangers do have the depth upfront to cover the loss of Hagelin’s defensive contributions. What throws a wrench into things is where to fit Etem into the lineup that puts him into a position to succeed. His skillset is really far more suited to a top-nine role than it is to a defensive one, and there really isn’t much room to accommodate him there. Currently, the top-nine forwards consist of Nash, Brassard, Zuccarello, Kreider, Stepan, Miller, Hayes, Lindberg and Stalberg. Is anyone really looking to displace any of those guys for Etem?

Having him watch from the press box doesn’t really do much good either. Usually, that 13th forward is more of a depth/defensive player. When a top-nine guy goes down, the pecking order is bumped up and the 13th forward slots in on the 4th line. If Etem is the last forward, depending on who gets injured, it may not be as seamless a transition into the lineup.

Etem also cannot go to the minors without passing through waivers. He is currently only making $850k, so the chances of someone with his talent level clearing are slim to none. A trade could make some sense, but we are really very early in the year to be talking about significant roster moves.

At this point, I’m not entirely sure what the best course of action for Etem is, but I know that burying him on the fourth line is not the answer. Maybe start a rotation amongst Etem, Miller and Stalberg? I don’t like that idea either.

Really, it comes down to how the Rangers view Etem’s long-term place in the organization. The club presumably has another exceedingly talented winger in Pavel Buchnevich coming over next season, which squeezes available scoring spots further. Personally, I feel he is a square peg in a round hole for this roster and a trade may be the best thing. For now, I would keep him for injury replacement purposes and try to rotate him in against teams vulnerable on the blue line. I know it’s not a popular opinion, but what’s happening right now makes no sense.