Emerson Etem will have a long leash for success 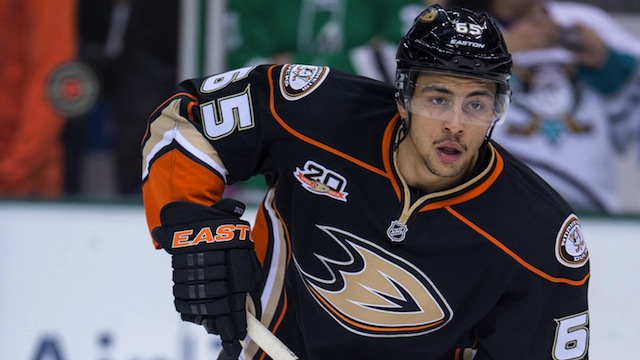 Through four preseason games, much ire has been directed at newly acquired forward Emerson Etem. The ire isn’t without reason, as Etem has underwhelmed thus far this September, but it comes with a little bit of bias. The Rangers were forced to trade fan favorite Carl Hagelin to Anaheim for Etem for salary cap purposes. Etem is making $850,500 this year. Hagelin signed a four-year, $16 million deal with Anaheim. Money was the sole purpose for this trade.

But the trade has been made, and the Rangers have a former first round pick on their team. Etem was taken 29th overall in 2010, and while draft pedigree might not matter five years later, the skill that made him a first round pick does not fade. The skill is clearly there, and we’ve seen flashes of it. Etem needs to put it all together. The Rangers will be patient while giving him every opportunity to succeed.

We’ve seen flashes of what he can do when his brain catches up to his skill:

Etem uses his speed wide while Kevin Hayes drives to the net. Etem recognizes this, and puts the puck at the net low and hard, knowing this will create a rebound opportunity for Hayes. The Rangers don’t score here, but Etem got them something from nothing.

The numbers for Etem also show improvement from year to year. The 23-year-old has seen his possession numbers increase (45.2%, 48%, 51.9% CF) in each of his first three seasons. His scoring-chance differential also jumped from 48.6% in his first year to 52.7% last season. His offensive zone starts jumped from 52% to 56% and he played with better teammates, which will certainly help his numbers a bit, but it shows Etem can take advantage in the offensive zone.

Like with most non-elite players, when Etem is put in a position to succeed, he’s shown he isn’t a detriment on the ice. Pairing him with potential linemates Hayes and Viktor Stalberg, two very smart players, is an ideal situation for Etem. Compound this with potentially receiving 60% offensive zone starts, and you have a situation where Etem may succeed. Also worth noting that Etem is an excellent skater, and Alain Vigneault’s systems are skating-intensive.

This is all important because the Rangers are banking on Etem to succeed. They didn’t trade Hagelin for him just to give up on him. They certainly aren’t going to cut him from camp, especially since he needs to clear waivers. Any article or call to have him cut or demoted are missing the fact that Etem simply will not clear waivers. It just won’t happen.

The Rangers are going to give Etem a long leash to succeed. It’s pretty funny how people are saying the Rangers need to cut him after a few underwhelming preseason games. Sure, he’s been underwhelming, that’s obvious. But it’s September, and he’s not even one regular season game into his Rangers career. If we are still having this discussion in January or February, then we have a problem. But right now, the Rangers are not going to just cut bait with Etem.