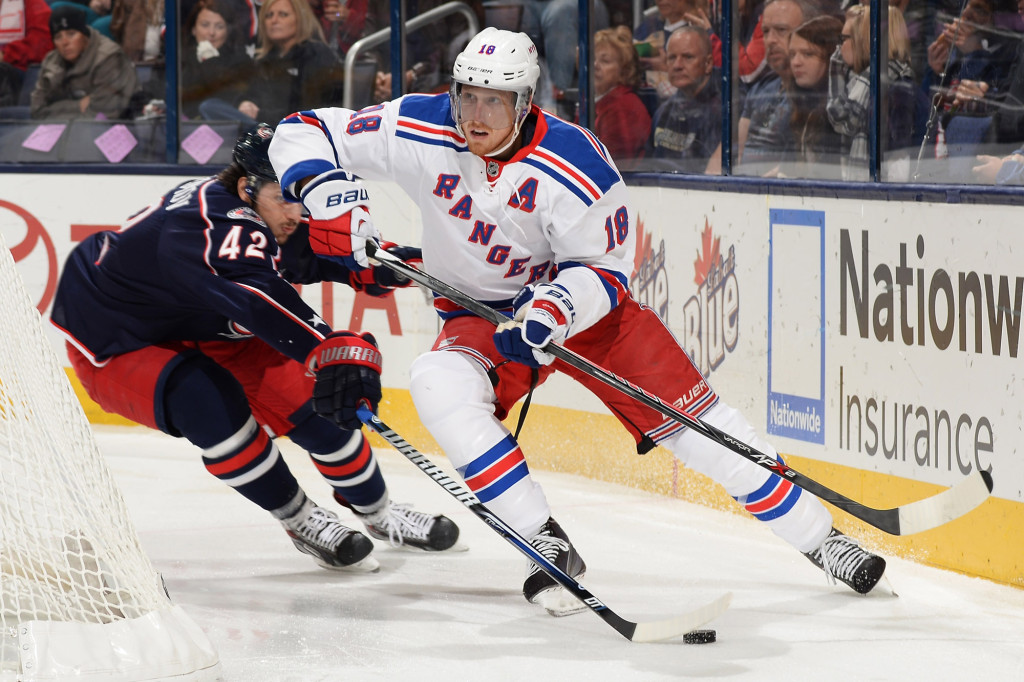 Update (5:20pm): To address the goaltending question, both Cam Talbot and Henrik Lundqvist were way above league average in adjusted goals saved above average (adjGSAA) which by definition compares goalies and, “as definitively as possible, regardless of circumstance, and in consideration of the tools we have and the variables we can actually account for, Goalie A is performing better than Goalie B.” Since these two goalies are above average, we can assume that they bail out their defense on high-danger shots on a regular basis.

Throughout this golden era of Rangers hockey, a period of time in which we have seen the most consistent success from the Rangers (still missing that one essential piece though), their vaunted defense has been the subject of much praise. That was until very recently, about the mid-point of two seasons ago, when the Rangers faced a critical decision with Dan Girardi. They re-signed their franchise defenseman, and then re-upped Marc Staal the following year. This locked up two core pieces for what could be the remainder of their careers.

Girardi and Staal, along with players like Kevin Klein, were widely viewed as integral parts of a shutdown defense, players that can smother the opposition’s top scorers. This line of thinking has been thoroughly questioned recently, but the concerns about the blue line were never really summarized in a complete and accurate picture. Most discussions were broken arguments on Twitter, and 140 characters isn’t enough to really lay out the case. Perhaps the Rangers blue line is over rated.

The first half of this discussion was put together very nicely by “Woodguy” at becauseoilers.blogspot.com. In his (I’m assuming “his” because of the name “Woodguy”) article, he posed the question “Was the Rangers defense responsible for Cam Talbot’s success in goal?” I’m not going to go into extreme detail, and if you want the details you should absolutely read the post, but the summary is interesting:

SO, ARE THEY AWESOME?

My answer is no, the New York Rangers do not have an elite Dcorps

5v5 shots against rates are not even league average and that doesn’t translate into what everyone is describing when they say stuff like:

“…, and he’s had the advantage of playing behind an experienced Rangers squad that plays good team defense.”

What we did find was that the Rangers have an elite Penalty Kill unit.

WHY DO PEOPLE THINK THEY ARE AWESOME?

Perception is reality and narratives take on life of their own.  Players like Giardi and Staal are physical and when players are perceived to be “working hard” they are also perceived to be “good.”

This particular statement struck me, and I wanted to dive deeper into it by analyzing the returning seven defenseman for this year’s team (Raphael Diaz is technically returning, albeit a year late). Using the same stats that Woodguy used, here are the individual stats from last season (all at even strength). Ranks are in parentheses, and are out of 205 defensemen that played 500 minutes or more last season.

There is only one current top-six NYR defenseman that ranks in the top half of the league in both limiting shots (SA/60) and shot attempts/Fenwick (FA/60). At the individual level, the Rangers are not good at limiting these attempts, and rely on their goaltending heavily. However half of their top-six is in the upper echelon of the league when it comes to limiting quality attempts (scoring chances, high danger scoring chances).

I have the feeling that Girardi is going to be the main point of contention for most, so I’m going to break this down just a bit more (I could go on forever on this). Girardi gets 42.52% offensive zone starts, which is 19th lowest in the league. Mark Giordano (Calgary, a terrible possession team last season) gets 42.68% offensive zone starts, and has better numbers all around. Barrett Jackman of St. Louis, at 42.63% OZ starts, also has better numbers.

Context does mean something here, as you have to consider roles. McDonagh and Girardi get the toughest assignments and zone starts, and it gets progressively easier down the lineup (hence why I listed them in that particular order). But here are the takeaways I get from this data:

At the team level, the Rangers sit middle of the road in defensive stats (again, quantity and quality of shots allowed). They don’t have anyone at the individual level that really stands out as elite. McDonagh is considered a notch below elite, but is weighed down heavily, so his numbers falter. This may be a tough pill to swallow, but the Rangers defense is over rated.