How could shooting regression affect the Rangers? 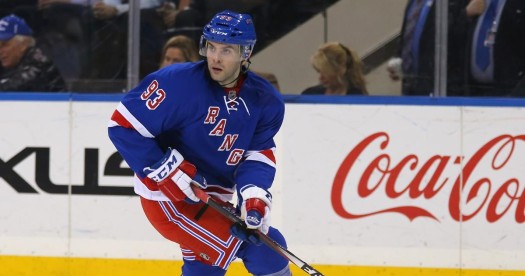 Last week I hypothesized about how the Rangers could make up for the 38 goals they lost when Carl Hagelin and Martin St. Louis departed and determined that there were plenty of reasons for optimism including Keith Yandle’s potential impact on the power play and improved production from young forwards. Then I began wondering about how having different luck could change things.

Luck has become a buzzword since the emergence of the #fancystats movement, with many theorizing that a team and player’s goal scoring totals could fluctuate wildly due as much to dumb luck as anything else. PDO is the most commonly used new stat to evaluate overall luck, but since the Rangers still have Henrik Lundqvist in goal, I’m not too worried about their luck changing on that side of the puck.

But up front the Blueshirts were actually a bit lucky last year, shooting 9.6% as a team to finish fifth overall. The average shooting percentage is generally 9.1%, so that’s not really a huge jump, but generating the sixth-most shots meant they finished third in goals scored. That was a major upgrade over the 18th rank they in 2013-2014, when they shot just 7.9%, fifth-worst in the league.

And indeed, tenths of percentage points can actually mean a difference of many goals over a season-long quantity of shots. If the Blueshirts had shot at 7.9% this season but maintained the same number of shots, they would have registered 45 fewer goals and ranked 24th in goals instead of third.

But what about on the individual level? Here’s a look at how the Blueshirts produced last season in comparison to their career average: 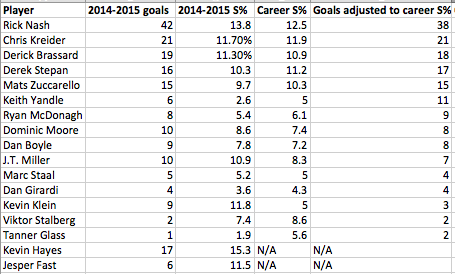 And here are the totals adjusted to the league average: 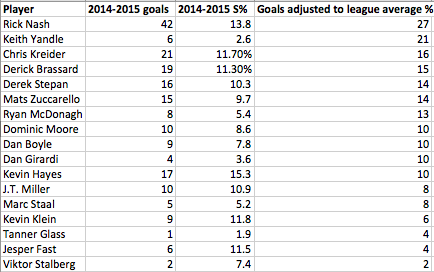 Of course, as the cliche goes, past performance doesn’t guarantee future results, but it doesn’t seem like regression to the mean would have a major impact on the team’s production. Nash outperformed – but that’s what goal scorers are paid to do. The defensemen underperformed with the exception of the frequently maligned Kevin Klein, but you’d expect that too. The most likely source for a jump would appear to be the aforementioned Yandle, who shoots at a tremendous rate for a defenseman.

Shooting percentage is a difficult statistic to look at on a single-year basis, but this doesn’t paint a poor picture for the Blueshirts’ chances of maintaining strong offensive results. A good offensive team that capitalizes in transition should convert on more chances than a plodding attack anyway, so there’s plenty of reason to believe that the Rangers’ conversion rate won’t drop off in year three of the AV era.