How Zuccarello has changed the Rangers pecking order 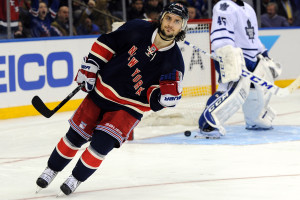 It’s still amazing to think that just a couple of short seasons ago, Mats Zuccarello was toiling away in the KHL because, well, the Rangers didn’t really want him. At best, they were certainly not convinced by him. Fast forward a few years and Zuccarello is absolutely irreplaceable on a club that harbours annual Stanley Cup hopes.

We all saw how the Rangers struggled to generate consistent offense in the playoffs. Zuccarello’s enforced absence early in the playoffs was almost an instant death knell to the team’s hopes of winning the Cup. It shouldn’t have been the case however.

The Rangers had Rick Nash, they had Marty St Louis in position to step up, they had their trio of young centers all entering the playoffs in good form and they had Chris ‘Mr Playoff’ Kreider. But it didn’t work out as intended. St Louis literally played himself out of a new contract and maybe even out of the league. Nash hasn’t ridden himself of his playoffs demons. So what does it all mean?

The Rangers’ Cup hopes will always start and end with Henrik Lundqvist. He was absolutely in the Conn Smythe reckoning until Tampa sneaked past the (at home) offensively challenged Rangers. After Lundqvist however, a new pecking order may be starting to emerge in New York and up front it may even begin with Zuccarello.

On a team that struggles to drive possession, Zuccarello is a strong possession player. He led the team in offense two seasons ago and after a slow start to the season just ended, Zuccarello had a strong second half (including 24 points in 29 games in February and March). Zuccarello is also the glue among the Rangers top nine forwards. He is one of the rare players in New York who can adapt to any combination of linemates and not see significant drop offs in production. The little Norwegian is also a significant reason for the emergence of Derick Brassard over the past two years. In short, Zuccarello makes others around him better.

If you can tolerate the pain, hark back to the playoffs and when Zuccarello fell out of the playoffs, the Rangers struggled. It’s no coincidence. Zuccarello brings a little bit of everything and that makes him so crucial to a team that has a lot of youth up front. His offensive numbers are also strong. In his past 155 regular season games, Zuccarello has an impressive 108 points and only 24 points were on special teams. Zuccarello is an incredibly efficient 5 on 5 asset to the Rangers and for a team that doesn’t boast a strong, consistent powerplay Zuccarello’s presence will only continue to grow in importance.

Next season the Rangers will almost surely be without Marty St Louis (who to his credit, still had 52 points) and they will need Zuccarello to step up and be a go-to guy. Rick Nash will once again be starting a season with some making up to do in the eyes of both media and fanbase so if Zuccarello is healthy and ready to go it will be a huge boon to the Rangers.

Zuccarello and Derick Brassard may be the only (top nine) Ranger forwards that will start next year without any question marks lingering because of their performances from this past season. Everyone will be expecting Kreider to take the next step, Stepan may begin the year with a huge new contract to justify and Nash will have his playoff inconsistency as a noose around his neck. You know the media will keep bringing that up. It all brings us back to Zuccarello.

Zuccarello’s importance and relevance have never been greater. He may have caused a new hierarchy of importance to emerge in New York without even being on the ice. Interesting times ahead for the Rangers.