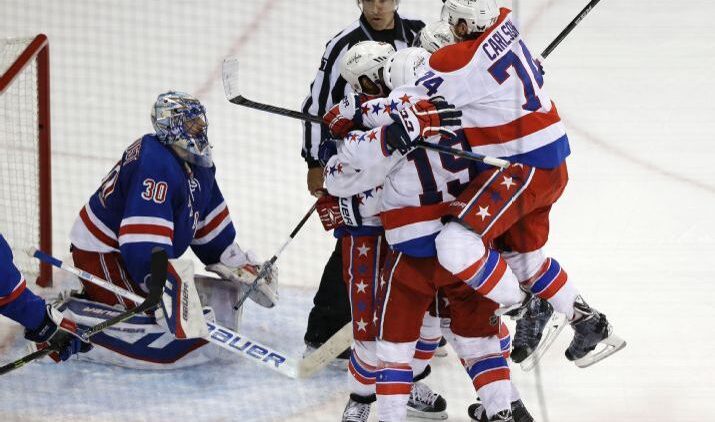 The New York Rangers entered last night’s game looking to take advantage of a supposedly tired Washington Capitals team. The Rangers were fresh off a week long break. The Caps had just played a grueling seven game series. Instead, the Caps played suffocating defense through 55 minutes, limiting the Rangers’ chances to the outside, and eventually got a late goal from Joel Ward with less than two seconds remaining to get the win.

The Rangers looked slow and rusty in their first game in a week, and it took them 55 minutes to get to that wide-open, rush style play that they like. They played the Caps game until then, and the Caps played their low-event hockey perfectly, relying on an absolute rip from Alex Ovechkin on the powerplay to take a 1-0 lead late into the third. Jesper Fast got the tying goal late, but the Rangers took a nap in the final two seconds before Ward’s tying goal.

The Rangers tried to contain Ovechkin, who was a machine all night. When he gets going, no one is going to stop him. I think they did a decent job of limiting him to the outside for the most part, but he did wind up with 16 scoring chances for (SCF) to just 6 against. He had a 2:1 ratio for CF and FF as well. He’s a game breaker, and if you limit him to one PPG from the outside, I consider it a win. That said, they still lost.

People are going to flock to this goal, an Alex Ovechkin goal on the powerplay, and wonder why the Rangers don’t shadow Ovechkin on the powerplay. There was nothing the Rangers could do here, except for maybe getting a stick on the puck in the neutral zone before it got to Ovechkin’s stick. He used Dan Boyle as a screen and just let loose a rocket over Henrik Lundqvist. Boyle was fine on this, Ovechkin is just in another world.

This was just an incredible shift by Kevin Hayes. He was a one-man wrecking crew, circling all over the ice and maintaining possession and zone time. Eventually he circled to the mid-point and put a wrister on net. It went off Jay Beagle’s stick, then Jesper Fast’s leg, and by Holtby to tie it late.

Everyone watches Ovechkin, no one watches Joel Ward in front. Terrible defense on this goal. You can say what you want on the Nick Backstrom hit on Boyle, but this was terrible all around.

I’d be remiss if I didn’t discuss this. Yes, it’s a hit from behind. Yes, it’s a missed call. No, it’s not what led to the goal. 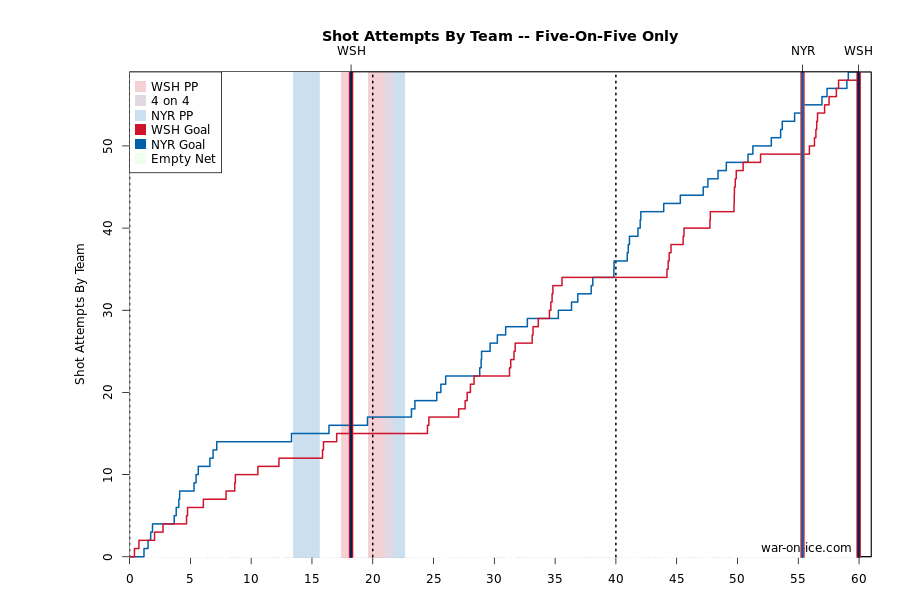 The teams themselves were fairly even throughout, playing low event hockey for most of the game. The shot attempts almost doubled for both teams in the third period though, as the Rangers woke up and started using their speed. 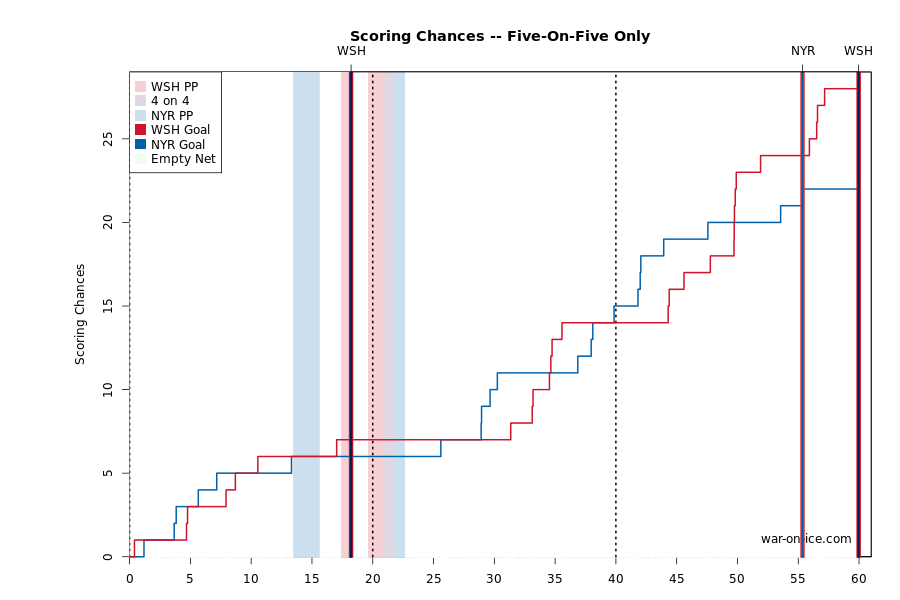 The game was relatively even for the most part, with not many true scoring chances until the third period. Both goalies played well, but the Caps really started taking advantage of bad turnovers and defensive zone play with ten minutes left in the game. 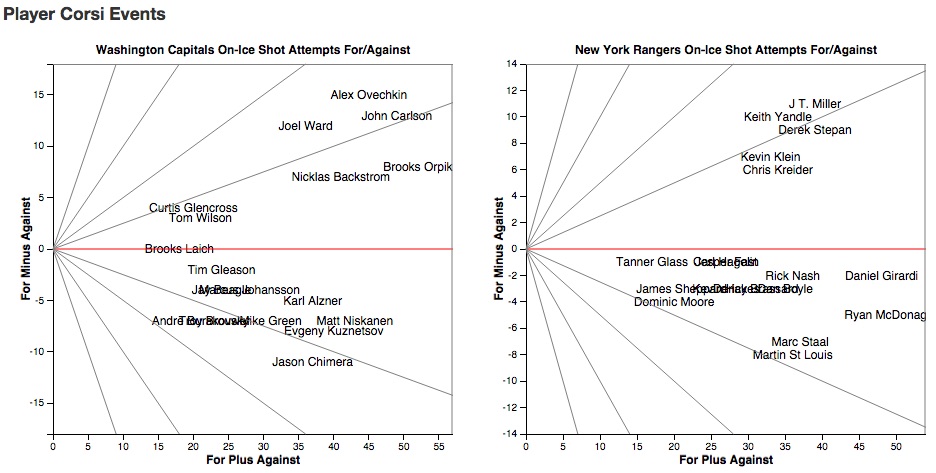 This is one of those times when the chart matches what we all saw. Staal/St. Louis had really bad games from what I saw. Miller had a few gaffes, but was solid for the most part. That line with Stepan and Kreider has been pure gold. Shows how much this team misses Zuccarello though. 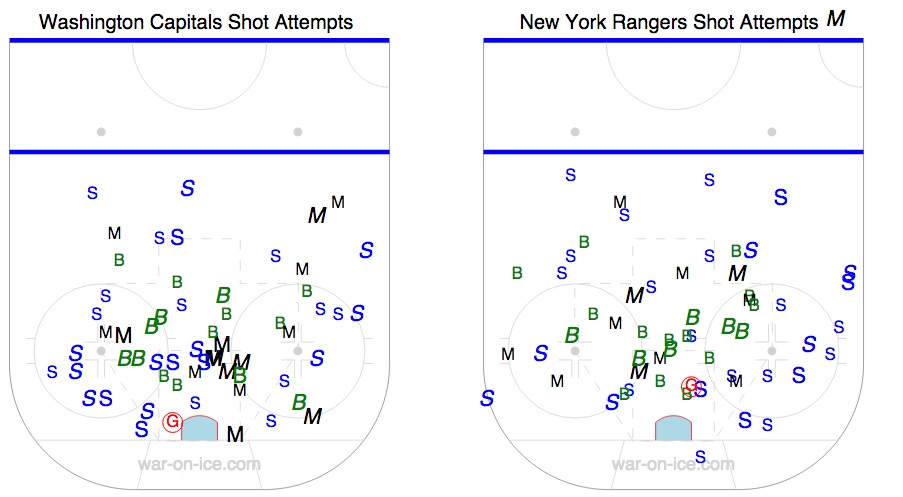 For some reason the shift chart wouldn’t upload. But it was a normal Alain Vigneault shift chart. McDonagh/Girardi got Ovechkin, as expected. It’s worth noting that AV doesn’t historically match his forwards against other forwards. He starts his forwards based on zone, and his defense based on opposition forwards.

This loss is a tough pill to swallow. The Rangers didn’t play great for 55 minutes, played their game for five minutes, and then a missed call combined with bad defense led to the winner. It’s a seven game series though. Winning Saturday is a must now.