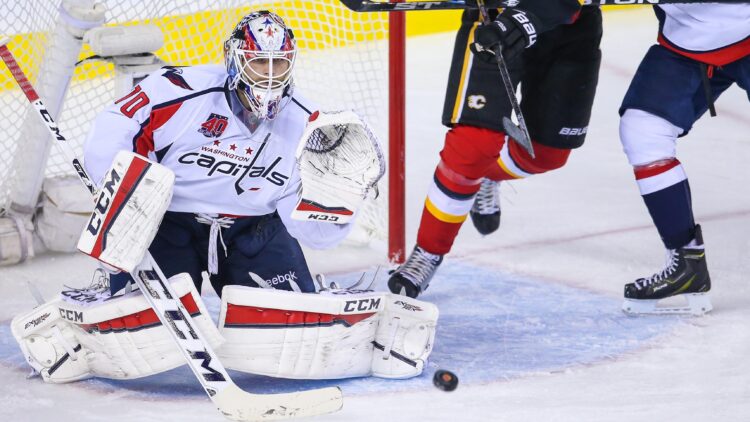 It took seven grueling games, but the when the Capitals defeated up the upstart Islanders on Monday night, D.C.’s finest secured a date with the Rangers for the fifth time in seven years. This brings us to our second round goaltending preview of Braden Holtby.

When I sit down to write these posts, I always take a look back to see if I’ve done previews before and see how my current analysis stacks up against my observations from prior seasons. I realized this time around that I’ve already done two (!) previews of the twenty five year-old Saskatchewan native. Those prior looks can be found here and here. Seems like only yesterday he was making his playoff debut.

After flashing serious potential in his first few seasons on a defensively porous Capitals team, Holtby put everything together this season under Barry Trotz. His numbers (2.44 GAA and .923 save percentage) were both single season bests. Additionally, he started 72 games this year, by far a career high (we’ll get to that later). He really cemented himself as an upper-echelon goaltender this season.

Sticking with the new format for the scouting report, I’ll look at Stance, Crease Movement/Depth, Equipment, Puck-Handling Ability, and Exploitable Weaknesses. Off we go… 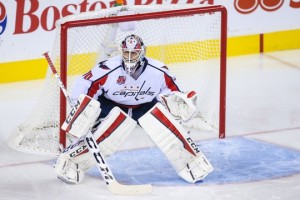 Holtby’s stance is something of an oddity. He was a fairly wide set, but it’s not as extreme in the hips and knees as it would usually appear. He has a slightly pronounced crouch, but the weight is distributed more to the knees and thighs than in the hips, directly. The stability in your stance generally will be rested in your hip sockets. Knees and other joints can bear the brunt of this weight, as well. Holtby’s chest position and lack of extreme inverse positioning of his knees distributes this weight better, leading to less restricted movement, all while maintaining a larger base in the lower part of the net.

This is all an overly complicated way of saying that Holtby’s stance exists in a more active position for lateral movement, rather than a drop and block style. The by-product of this is the propensity to be jittery in your movements and more instances of fighting the puck. Holtby’s poise seems to counteract that quite a bit, but it’s an interesting observation.

Since Holtby’s game is very laterally-focused, he plays more of a mid-crease depth. It is much easier to cover ground laterally when you are a little deeper, because your line is more direct and you have less physical distance to cover, post-to-post. Holtby is a good sized tender (6’2”, 203lbs), so it’s not a big deal if he isn’t as aggressive on direct shots, since his frame is more than enough to cover the difference.

As previously alluded to, Holtby has tremendous lateral movement and mobility. He is an athletic goaltender who is a strong skater and is very quick to recover. He has a slight tendency to overplay the puck on occasion, which we will get to below, but he has several elite skills on the skating/movement side of things.

Holtby has been historically loyal to the hybrid line of the Reebok/CCM brand. Last season he wore the original CCM EFP line, and this season he has upgraded to the EFP II pad, worn by Carey Price, Jonathan Bernier, Semyon Varlamov and Sergei Bobrovsky. The return to the goaltending industry has been an overwhelming success for CCM, and early returns are very positive on this line.

The biggest feature, aside from soft rebounds, increased flexibility and “connectedness” of traditional hybrid pads, is the exceptionally soft boot on this model. It is designed to flex and twist with your skates to allow a greater attacking angle and more responsiveness on lateral pushes. This plays directly into Holtby’s mobility strength and has presumably been a welcome addition to his efforts on the ice.

The only other interesting wrinkle in Holtby’s set up is his glove. He wears a 90 degree break catcher (as does Mike Smith and Roberto Luongo). The basic difference is the angle in which the glove closes. Your traditional 60 degree break acts almost like a baseball mitt. The thumb and pointer fingers connect at a natural point, which closes the glove. The 90 degree break, however, sees the fingers connect with the glove at the bottom of the palm, instead of the thumb. It’s not my cup of tea, but it’s been said to improve the overhand puck-handling (Turco) grip.

Speaking of puck-handling, this is an area in which Holtby has shown significant improvement over the past few seasons. He was always competent in this department, but he has shown a knack for it this season. I don’t think he will ever be the stretch pass, goal-scoring type player, but he makes good reads and is alert in his decision-making.

As I mentioned with Marc-Andre Fleury in the last breakdown, with the Rangers more counter-attacking style, I doubt it becomes a major factor in the series.

When you get deeper into the playoffs, the specific game plan to exploit the weaknesses of the opposing tender seem to go by the wayside. Especially, when you have guys this talented at the other end. It may sound like a cop out, but getting good chances in dangerous areas is the best recipe for success. However, as I mentioned above, there is some potential to exploit Holtby’s movements. If you can get him looking laterally, you might be able to sneak some bad-angle shots through.

Another factor to consider, as Steve Valiquette (@Vallys_View) mentioned the other day, fatigue could be a issue for Holtby. Not only did he undertake his largest regular season workload this year, he just finished a grueling seven game series against the Islanders. The Rangers need to make him move and stop pucks as frequently as possible. Throw everything on net.

With the exception (obviously) of Carey Price, Holtby might just be the best remaining goalie the Rangers could potentially face in this year’s postseason. You could make the argument for Ben Bishop, I suppose, but regardless, the Rangers will have their hands full. They need to dictate the play and get pucks to the net. It will be a big challenge.