The New York Rangers made us sweat, but it was Carl Hagelin’s goal in overtime that gave the Rangers the series in just five games. This was a very tight game throughout, with Henrik Lundqvist and Marc-Andre Fleury putting on a clinic in keeping your team in it. This was a much better 60+ minute showing for the Rangers, who came out flat two nights ago but still managed to eke out a win, as both teams played a fast-paced, physical game.

All four games that the Rangers won came at a 2-1 score, with the final two coming in overtime. There’s not much else to breakdown. Enjoy it folks. On to the goals:

The Rangers finally scored on the powerplay. The entire unit did a good job with puck support and keeping possession. Eventually the puck got to Dan Boyle at the point, who put a shot on net that Marc-Andre Fleury mishandled, and Derek Stepan was there to bang home the rebound.

Honestly, there’s not much wrong here. J.T. Miller smothered Nick Spaling, who got credit for the goal, and Matt Hunwick deflected the Sidney Crosby pass. The explanation about why this wasn’t goaltender interference was given as, “Contact was made after the puck was in the net.”

Carl Hagelin. Game, set, match. So long Pittsburgh. Hats off to Dominic Moore on this shift. Same with the other guys on the ice. Moore worked hard along the boards. Dan Girardi and Ryan McDonagh did a great job keeping the puck and continuing to get it deep. Jesper Fast with a great job of drawing guys to him and moving to open ice.

The Pens had an edge, albeit a slight one, for most of the game in raw shot attempts. The difference wasn’t large at the end, especially when you see that scoring chances were even. The Rangers defense did a good job of limiting –to the best you can limit Crosby and Malkin– attempts to the outside for most of this series, but last night was all Hank.

This chart speaks very accurately for Chris Kreider and J.T. Miller, who had phenomenal games. Dan Boyle did as well. I have to be honest, it’s tough to gauge eye test with this chart on single game samples, but Kreider, Miller, and Boyle stood out for me. 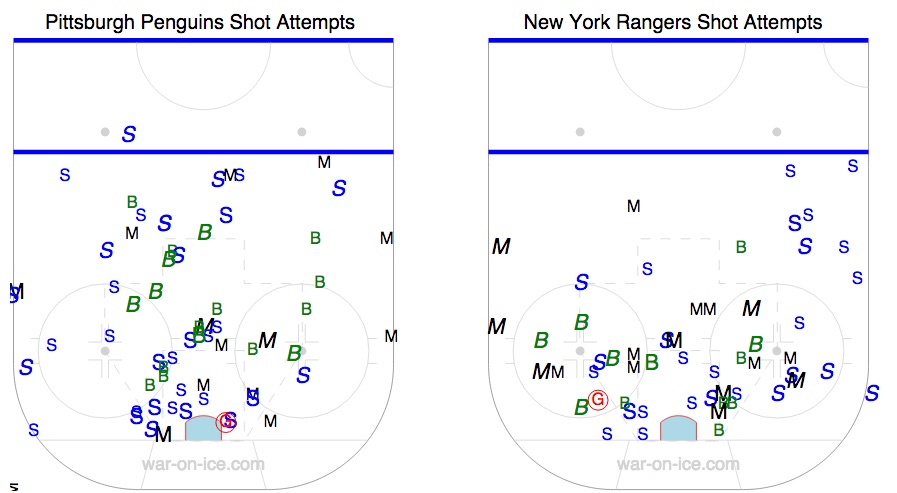 The goalies really stole this show. Look at all these attempts in prime locations.

You really can’t say anything negative about Dan Girardi this series. He and McDonagh played a phenomenal five games. Girardi takes a lot of flack around here, specifically from me, but wow was he good.

For the first time in recent memory, the Rangers won a series without it going six or seven games. Sit back, relax, and enjoy it.