Which Rangers could turn into overnight heroes? 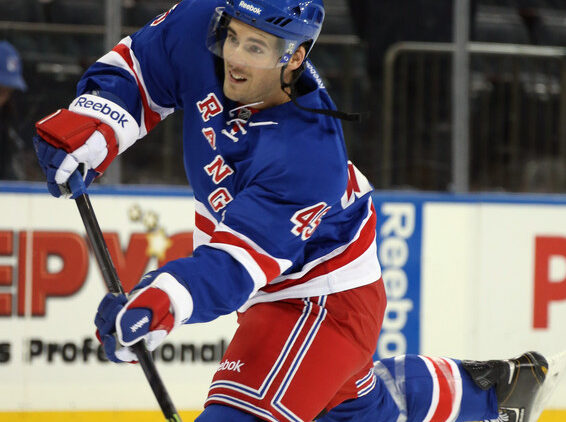 To go on a playoff run, a team needs solid goaltending first and foremost. It needs to stay healthy, and a good bit of luck. And it needs contributions from up and down the lineup.When the game inevitably tightens up in crunch time, the snipers and playmaking artists are often mitigated in favor of greasy goals with traffic in front of the net. They tend to come from unlikely sources – cement-handed Brian Boyle was among New York’s most dependable postseason scorers in recent years.

So who are the candidates to become overnight heroes this spring?  Ignoring the top offensive guys – and that now most certainly includes J.T. Miller and Kevin Hayes – here are the cases for the grinders:

James Sheppard – GM Glen Sather made a point of noting Sheppard’s performance in last year’s playoffs when he scored six points in seven games against the eventual champion Kings. Sheppard has a nose for the net, which works to his advantage this time of year. The biggest thing working against Becky’s latest crush is his spot on the depth chart – there’s no guarantee he’ll even dress for many games.

Dominic Moore – The veteran pivot filled in admirably in a more offensive role when Derrick Brassard and Derek Stepan were injured last year in the Eastern Conference Finals against the Canadiens. Moore has some offense to his game – as evidenced by his backhand-shelf marker against Washington in the season finale. However, Moore is deployed alongside possession anchors almost exclusively in the defensive zone and never shirks those duties, so he doesn’t find himself in scoring position all that often. Still, this is a guy that will put it all on the line and has a bit of magic about him.

Jesper Fast – The Swedish rookie was overshadowed by fellow freshmen Hayes and Miller, but Fast began to contribute offensively late in the year. He has a pedigree, and though we haven’t seen much of it yet, there’s more underneath the surface here. Fast will also always put defense first, but if you’re looking for a completely out of nowhere hero, Fast could be the guy.

Tanner Glass – There’s nothing the hockey gods love more than sweet irony, right? We’ve written about Glass ad nauseum, but he actually has been much more involved over the last month. Glass had just one regular season goal, but I’m betting on another in the postseason, one that will probably bounce in off his head.

Kevin Klein – The injured blueliner should make his return for Game One, giving the Blueshirts a fully healthy defense for the first time since just after the Keith Yandle trade. Klein never showed much offensive acumen before this season, but he exploded for 26 points (nine goals, including four game-winners). He was in a lengthy drought before getting hurt, but Klein’s career year might not be over yet.

Who do you think might step up out of nowhere?