The New York Rangers defeated the Carolina Hurricanes 4-1 (oops, they have one game left, sorry). The Rangers didn’t come out strong in the first half of the game, getting utterly dominated by the Canes in the early going. Luckily the Rangers were able to capitalize on an Andrej Sekera turnover to take the early lead. Then Dominic Moore scored an unbelievable goal (video below) to give the Rangers a 2-0 lead. They played poorly early, but you take the 2-0 lead.

Henrik Lundqvist played great again, and proved to us that he is not human. There was a freak play where Ryan McDonagh’s stick came up and knocked Hank’s helmet up right as the puck got there, clipping him in the throat. Luckily for the Rangers, Hank doesn’t breathe through his trachea, he breathes through that luxurious hair of his, and after some quick attention and sending most Ranger fans into cardiac arrest, he stayed in the game.

Chris Kreider was a man on a mission last night, and was in beast mode throughout the game. It was only fitting that he got the goal that gave the Rangers a two-goal lead in the third period. AV shook up his lines, and it looked to finally pay off. Albeit against a bad Carolina team on the second of back-to-backs. Gotta start somewhere though. 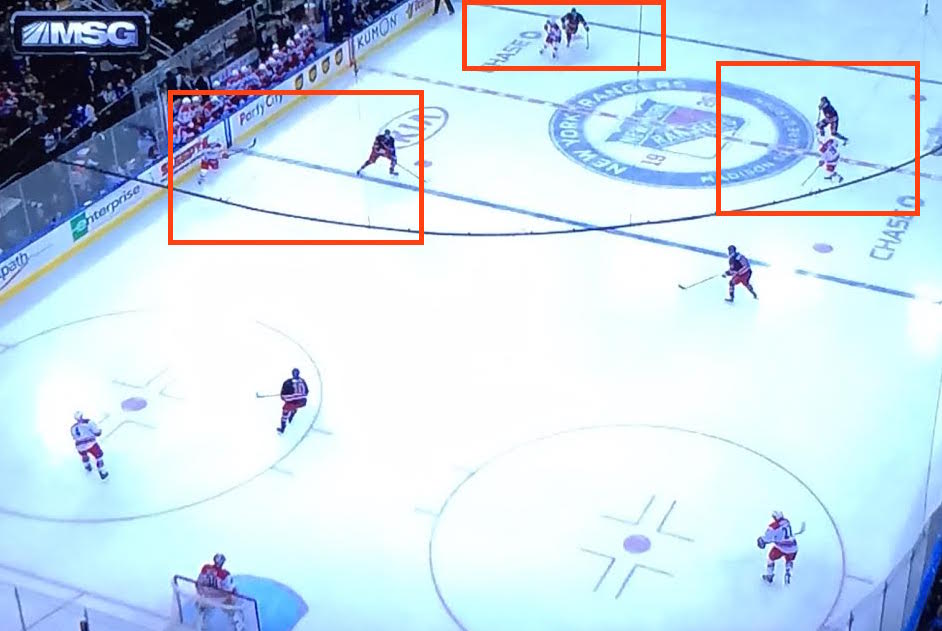 J.T. Miller was in on the forecheck, and the pressure from him down low, Rick Nash/Derick Brassard at the blue line, and the defensemen at the red line severely limited Sekera’s options. Sekera tried to force a pass, and Nash picked it off, crossed over to his natural wing, and fired it past Cam Ward for the goal. This was a perfectly executed 1-2-2 forecheck by the Rangers. 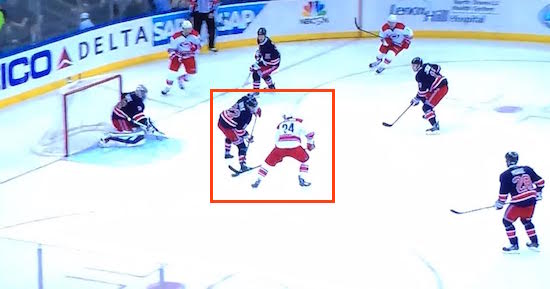 Dan Boyle didn’t stick Brad Malone, who had his stick free to deflect Ryan Murphy’s pass past Hank for the goal. 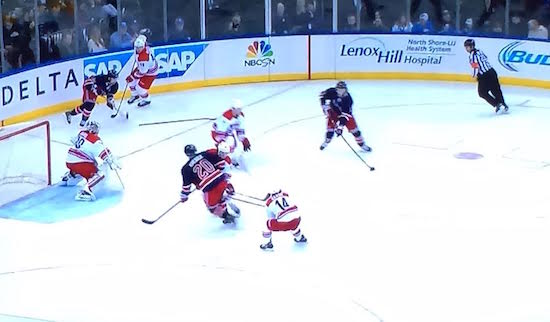 Great shift by Kreider, Kevin Hayes, and Mats Zuccarello. Zucc and Hayes battled to regain possession after Kreider’s initial shot, and Hayes eventually got it in the low slot. Kreider got free of his man, and Hayes put the puck right on Kreider’s tape for the goal. Another example of ensuring that you tie up your man’s stick. 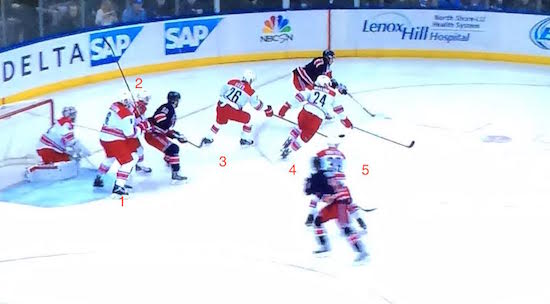 Five Canes were down low, leaving Boyle wide open at the point. Carl Hagelin got him the puck, and the shot from the point went off Tim Gleason and by Ward. 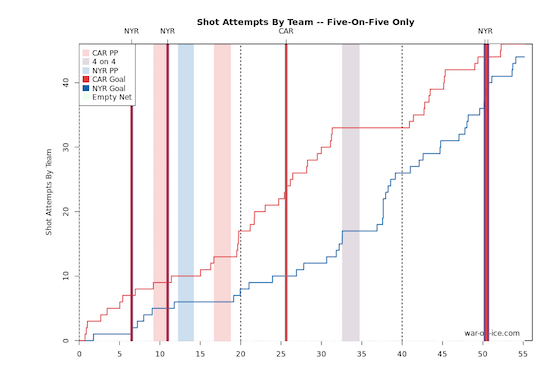 This game should have been ugly fast, but Hank kept them in it. It wasn’t until the end of the second that the Rangers started really turning it on, using their forecheck to create turnovers and generate shots. Up until the 35 minute mark, it was ugly though. 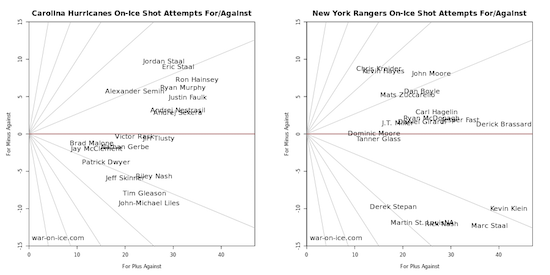 It’s tough to really gauge how certain lines did, as Alain Vigneault changed the lines a bunch throughout the game. Marc Staal and Kevin Klein had a rough game from a possession standpoint, but there were a few shifts that Staal stood out in a positive way. 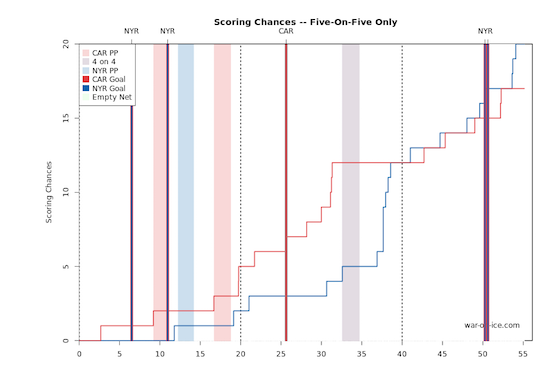 Same as above with the Fenwick analysis.

Some limited shot attempts from the slot, which is good. Even if the first half of the game was ugly, the Rangers did a good job limiting the Canes to the outside. 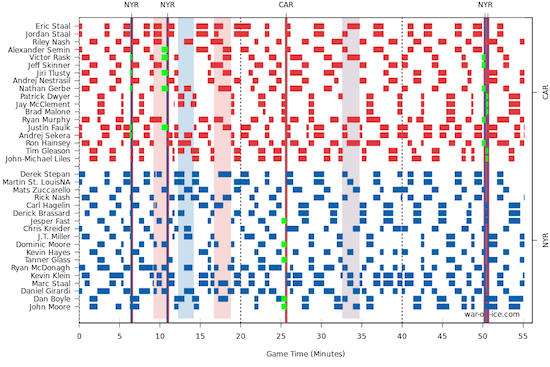 AV changed his forward lines a lot throughout the game, so there are no real matchups that I can readily point out. But as expected, Dan Girardi/Ryan McDonagh got the Carolina Staals. Klein/Staal got the Skinner line. These are normal matchups for AV.

The Rangers righted the ship and finished January with an 8-4 record. The Rangers now sit third in the division with 60 points. Winning their games in hand puts them in second and within one point of the Isles as well. It looks like all things clicked with the Rangers in the second half of the game too, so hopefully it carries over.